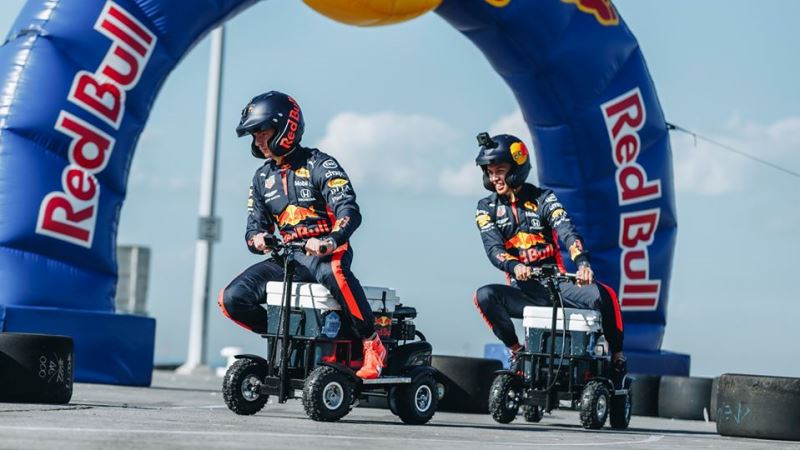 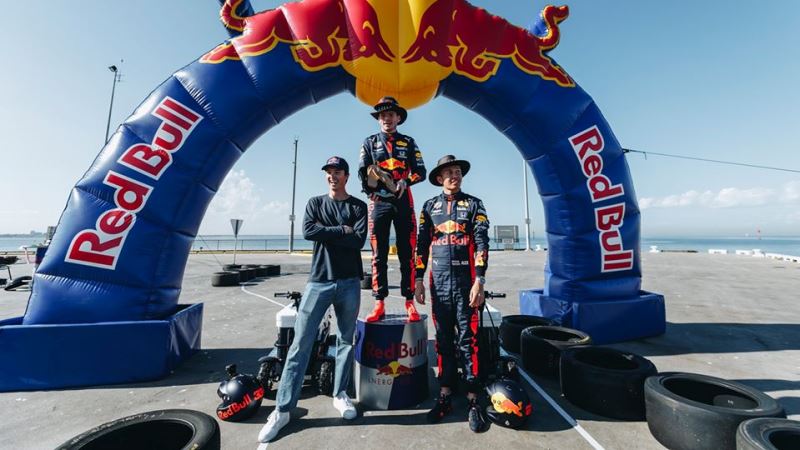 Max and Alex embraced their inner Aussie in Melbourne this morning, racing motorised coolers around a mini Albert Park Circuit ahead of this weekend’s season opening Australian Grand Prix.
Featuring a 35-litre cool box and a 80cc four-stroke engine, a motorised cooler ‘YETI esky’ is as Aussie as thongs, Vegemite and ‘avo’ on toast, with both drivers pushing to the limit to extract the monstrous 1.5hp engine output!
Hosted by world-class Olympic medal-winning snowboarder Scotty James, Max and Alex battled it out for the first trophy of 2020 by going wheel-to-wheel in an epic duel at speeds of up to 25 kph at the city’s Station Pier, with some added extra Australiana challenges to boot. The drivers’ first test of the morning was the country’s classic “dry Weet-Bix challenge” followed by a sausage sizzle task, with some laundry chores to round off the day.
After three laps of a near-perfect model of Melbourne’s Albert Park F1 circuit, and plenty of corner cutting by both drivers, Max emerged victorious. “I beat Alex, so that’s already positive, and the first trophy of the week, so let’s hope that on Sunday we can add another one,” Max laughed. “I’d never heard of racing these things before, but it seemed pretty cool and I was really looking forward to it. Initially I had a bit of free play on the wheel, but we fixed that and then the balance was spot on! I just wanted 200 horsepower more, but not to worry. It was a lot of fun and now I’m really looking forward to this weekend. The atmosphere in Melbourne is great and coming here for the first race of the year is always a highlight. Nothing is decided yet, we all start on zero points and no one knows where they really are in terms of outright performance, but we’ll find out this weekend.”
Alex, meanwhile, said that set-up issues and mechanical woes may have compromised his cool box race. “We have a few set-up things I would have changed, plus our cooler had some mechanical issues as well, so reliability over winter testing obviously didn’t go very well,” he joked. “We had a problem with a chain that Max broke within half a lap and I broke my chain as well. We had chassis flexing, which is the first time I’ve ever heard of anything like that. So, if you turned too much into a corner the engine would come loose. So, we have some work to do!”