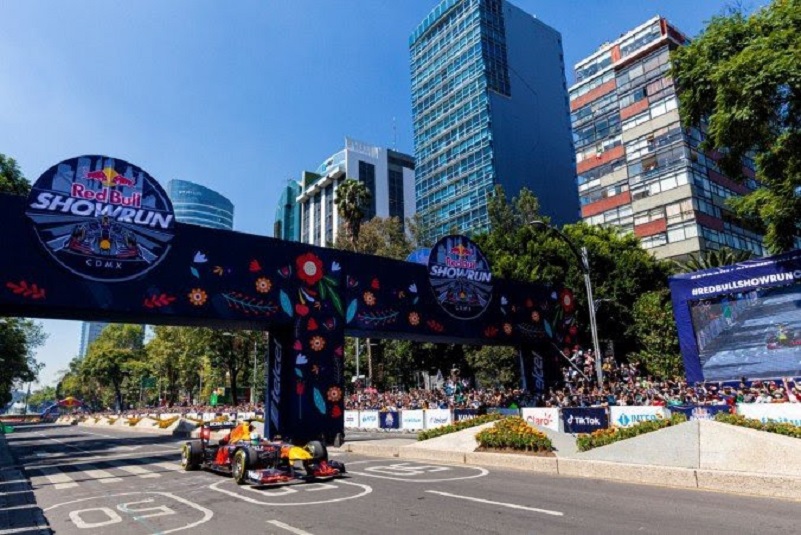 Sergio ‘Checo’ Perez charged into action on the streets of Mexico City today at the iconic Paseo de la Reforma, with a series of flat-out blasts and tyre-smoking donuts along the city’s historic boulevard.

Bringing Formula One power to a massive crowd of 130,000 fans, Checo cranked up the double championship-winning Red Bull Racing RB7 and lit up Mexico City in preparation for his home race at this weekend’s Grand Prix.

Checo unveiled a special edition driver’s suit to bring even more colour to his home show run, and a one-off helmet design that he’ll also wear for this weekend’s race at the Autodrómo Hermanos Rodriguez.

Speaking after the event, Sergio Perez said: “It feels amazing to back here in Mexico City, I never really imagined a moment like this, I think as an athlete and a driver you always think about being on track making memories, but today was crazy, we took over Mexico City. It was such a special way to start my home Grand Prix weekend. Everyone was full of energy and the people have been amazing, even camping here since last night. I am really looking forward to seeing all the fans back at track this weekend too. My ambitions for this weekend are to be in the mix to win the race on Sunday and it would mean everything to me to come out on top in Mexico.”