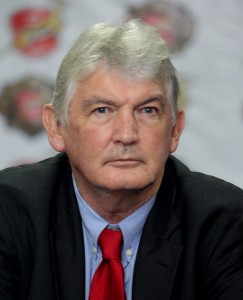 Steve Darby is focused on the Elephants.

WHILE Kelantan celebrated their 2-0 win over Hong Kong’s South China in a Group G match in the AFC Cup, coach Steve Darby is already focused on his team’s next biggie which is a Super League match against Pahang.

The new league leaders who surged to the top following a come-from-behind 2-1 win over defending champions Lions XII in Singapore last week will face Pahang at home on Saturday.

Pahang, playing under new chief coach Zainal Abidin Hassan, who took over the hot seat after Australian Ronald Smith quit earlier this month, scored a thumping 4-1 win over Armed Forces at home in their last match – a clear warning that they are back in the groove.

Kelantan have 12 points from six matches while Pahang are fourth on points on goal difference.

Before Kelantan won their league match across the causeway, Pahang booted the Singapore outfit out of the FA Cup with a 2-1 win in a second round match. In the process Pahang ended Lions’ 18-month unbeaten run at home

“We have a real tight and tough schedule on all fronts … and will be playing six matches in 17 days. We cleared the first (against South China) and Pahang will be our second of the six matches.

“I have to rotate my small squad to keep my key players ‘fresh’ for the matches. The gamble (in the AFC Cup match) paid off. Now we have to plan another gamble for the Pahang match,” Darby told Sports247.my.

The Englishman has already decided that skipper Mohd Badhri Radzi, Egyptian Mohammed Shawky and Fakri Saarani will feature in his first team to suit his match plans against Pahang.

“They did not start against South China and came on only midway in the second half … so I will have fresh legs to face Pahang. Pahang are experienced and have the players to win matches.

“With a small squad I have to rotate my players. Injuries are a big concern for me. Ghaddar suffered a recurrence (groin) and looks doubtful.

“He was not in my match plans against South China but he begged to play. I allowed him after the physiotherapist told me he was good to play for about 20 minutes. He did not disappoint and scored the scored the second and had a hand in the first.

“Now he is injured again but he is a fighter. Whether he will play against Pahang is left to be seen. Anyway, I can field only three foreign players in the M-League.”

After the Pahang match Kelantan will meet Vietnam’s high riding Vissai Ninh Binh in a AFC Cup match at home on March 18. Despite the win over South China, Kelantan are third in the group on goal difference (5-5) against Yangon United’s 7-6 tally.

In the league Kelantan also face a tough away match against Selangor (March 22), Johor Darul Takzim at home (March 25), Terengganu away (March 29) and complete their first round fixtures with a home match against Armed Forces (April 4).