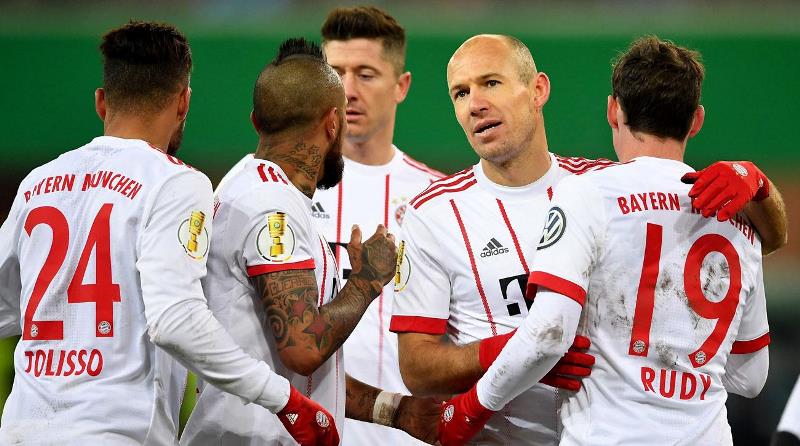 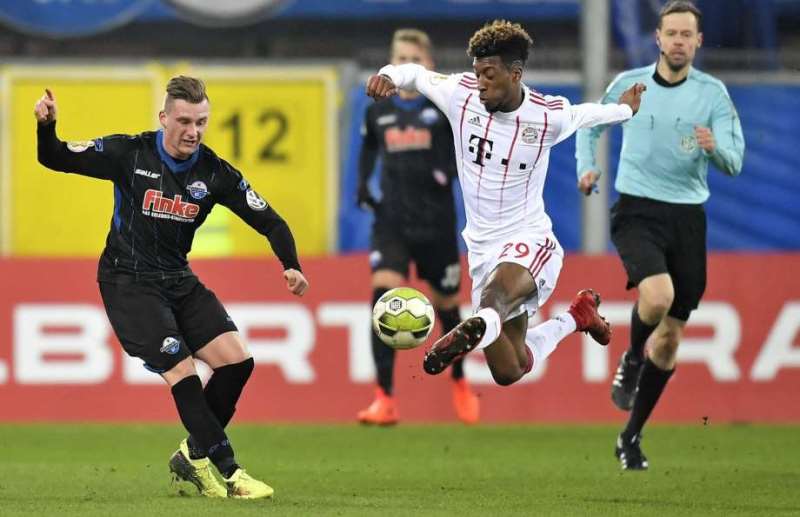 Arjen Robben scored twice as Bayern Munich breezed into the last four of the German Cup with a 6-0 quarter-final romp at third-division Paderborn on Tuesday.

“We only need one more step to Berlin and we really want the double,” said Robben, with the German Cup final to be played in the capital on May 19.

“We’re really happy, it was a team effort. We created and finished some nice goals.”

But Bayern could be without Thomas Mueller for Saturday’s Bundesliga clash against Schalke after the Germany forward limped off injured during the first half.

Mueller bruised his thigh after colliding with Paderborn’s goalkeeper in the build-up to the opening goal from Coman on 19 minutes, after Paderborn had seen an earlier effort ruled out for offside.

“We hope he’ll be okay to play against Schalke, we took him off as a precautionary measure,” said Bayern coach Jupp Heynckes.

Bayern went 2-0 up on 25 minutes when Coman lobbed the defence and striker Lewandowski finished clinically.

It was the 25th time the prolific Polish star has hit the net for Bayern this season in all competitions.

Mueller played on until just past the half-hour mark before being replaced by Tolisso.

With Paderborn’s defence then distracted by Lewandowski free in the middle of the box, Bayern right-back Kimmich fired home inside the near post to make it 3-0 at the break.

Tolisso kept the scoreboard ticking over when he headed home a James Rodriguez cross 10 minutes into the second half.

Paderborn, who had never previously got this far in the competition, nearly grabbed a consolation goal when Sven Michel hit the post on 57 minutes.

But Robben inflated the scoreline with two goals in the dying stages.

Sebastian Rudy squared a Tolisso cross and Robben curled his shot home for his first goal on 86 minutes.

Then two minutes later Robben grabbed a second when replacement Franck Ribery drew the goalkeeper and passed across to the Dutchman who tapped home.

Bayern are 18 points clear in the Bundesliga and will be joined in the semi-final draw by Bayer Leverkusen or Werder Bremen who meet later on Tuesday.

Eintracht Frankfurt host Mainz and Schalke are at home to Wolfsburg in all-Bundesliga clashes on Wednesday.  –Agence France-Presse