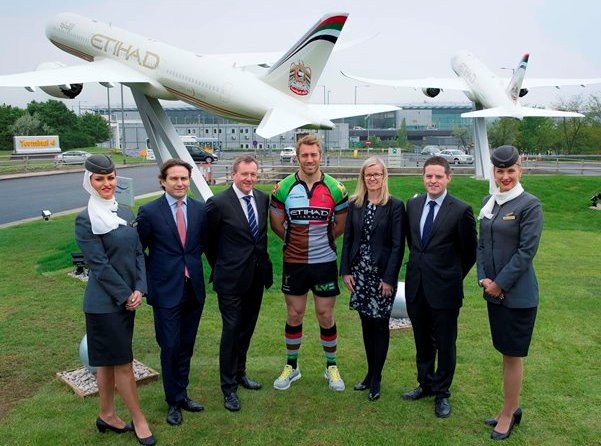 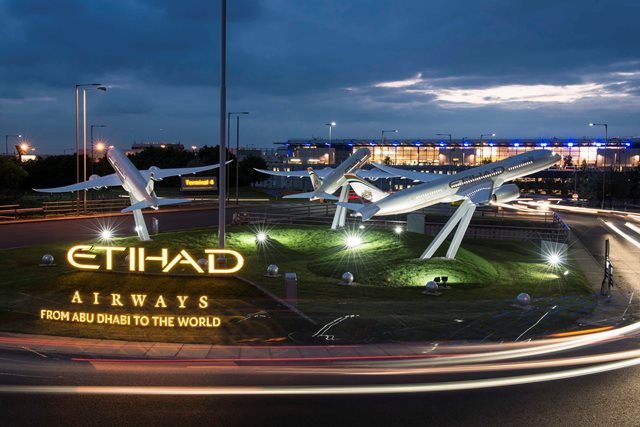 The three model aircraft in Etihad Airways livery, each weighing 1.4 tonnes, with a wing span of 10 metres, will be seen by more than 6.6 million people every year as they drive past the roundabout.

James Hogan, Etihad Airways’ President and Chief Executive Officer, said: “Heathrow is one of Etihad Airways’ most popular destinations and we’re delighted to use one of the most prominent and well-known locations at the airport to promote the Boeing 787 aircraft which we’ll take delivery of later this year.”

The Etihad roundabout has been unveiled as the airline celebrates its 10th anniversary of services from London Heathrow – its first destination outside the Middle East region. Since 2004, more than two million passengers have flown between Heathrow and Abu Dhabi.

Chris Robshaw said: “I fly from Heathrow a lot with England and Harlequins and it’ll be great to see the three Boeing 787 Dreamliners each time I head off on a flight. I’ve been involved in a number of promotions with Etihad in Abu Dhabi so it’s nice to take part in this one a little closer to home.”

Etihad Airways is the largest airline customer for the Boeing 787, with 71 of the aircraft on order.

“The unveiling is testament to the significant role the 787 will play in Etihad’s future fleet and we are proud of the continued confidence it has placed in our products.”

Alan Sullivan, of JCDecaux Airport, said: “This is a fantastic addition to our Heathrow media portfolio and it is great to see Etihad Airways harness the potential of this space.

“The travel sector is one of our most important categories at JCDecaux Airport and we’re delighted that a valued commercial partner such as Etihad Airways is dominating the gateway to their home at Terminal 4 with this iconic installation.”

Etihad Airways currently operates three flights a day from Heathrow, as well as a twice daily service from Manchester, to Abu Dhabi where passengers can connect to its network of destinations in Africa, the Middle East and Asia.