Home 2021 Roglic triumphs at the end of the Camino 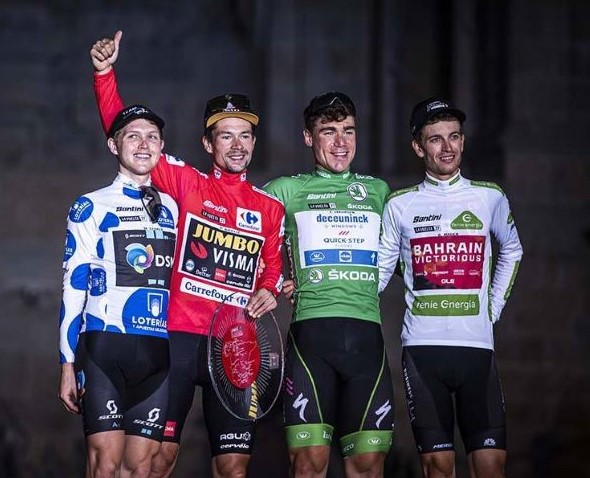 Three weeks after he won the opening time trial of La Vuelta 21, in front of the cathedral of Burgos, Primoz Roglic (Jumbo-Visma) dominated the final one with a finish next to the cathedral of Santiago de Compostela.

The Slovenian made four stage wins in this edition of the Spanish Grand Tour to claim his third overall victory in a row in dominant fashion.

His margin of 4’42’’ on Enric Mas (Movistar Team) is the biggest between the winner of La Vuelta and the second rider overall since 1997. Jack Haig (Bahrain Victorious) joins Roglic and Mas on the overall podium after 3.417km of battle through Spain.

Josef Cerny (Deceuninck-Quick Step) is the first rider on the road, at 17:02. He’s also the first at the finish in front of the cathedral, with a time of 45’18’’, and he sits on the hot seat for more than an hour before Magnus Cort Nielsen (EF Education Nippo), freshly crowned as the most combative rider of La Vuelta 21, shows he still has something in his tank after his three spectacular stage wins: 44’16’’ (45.813km/h).

Thymen Arensman (Team DSM) takes a spot between Cort Nielsen and Cerny, with a time of 44’54’’ 8+38’’). The top of the standings don’t change until the leaders start their effort. Primoz Roglic (Jumbo-Visma) is on his way to Santiago de Compostela at 19:43, a few minutes after Fabio Aru (Team Qhubeka NextHash) bids farewell to pro cycling.

“It was a super nice day, and nice three weeks, so I’m happy for myself and my guys around. It was hard, the last one after all these weeks. Still I enjoyed support on the road. I tried to focus on the stage win. It’s unbelievable, it’s crazy. Sometimes, you win by a lot, sometimes it’s very little. But as long as you can win, it’s good. I’m not focusing on numbers and statistics, I just go day by day. I like to do my best and I definitely enjoy it,” said Roglic.

Primoz Roglic flies to the first intermediate (km 13), already putting 19’’ between him and Cort Nielsen and 1’08’’ to Enric Mas (Movistar Team). Adam Yates (Ineos Grenadiers) already gains 26’’ on Jack Haig (Bahrain Victorious) in the battle for the third place on the podium. The Brit needs to gain 1’ to edge the Aussie.

After such a strong start, Roglic powers to victory 14’’ ahead of Cort Nielsen. He even goes past Mas in the final hectometres to seal his overall triumph with a historical margin of 4’42’’. Haig eventually finishes 26’’ faster than Yates to be the second Australian rider on the podium of La Vuelta, 12 years after Cadel Evans. – www.lavuelta.es