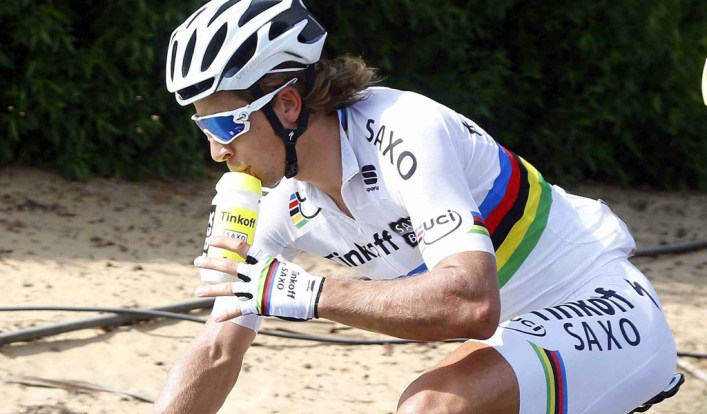 With four consecutive Tour de France green jerseys and several other notable wins on his CV, Sagan was hailed as a worthy winner of the rainbow jersey when he triumphed in the world championships in Virginia last September.

But the curse that has struck a number of former world champions in the past has so far attached itself to the 26-year-old Tinkoff-Saxo rider.

Sagan heads into the 107th edition of ‘La Primavera’ on Saturday with four runner-up places this season and without a Tirreno-Adriatico stage win for the first time in his career.

At last week’s Italian stage race he was upstaged by Zdenek Stybar on stage two, then lost by just one second to Belgian Greg Van Avermaet, of BMC, in the general classification.

Sagan, whose penchant for doing things a little bit differently from the rest of the peloton recently saw him break a strict cycling code by competing with hairy legs, insists he is not the only one under pressure.

With four top-ten finishes in five appearances at Milan-San Remo and with his form “good”, the Slovakian said it’s time to “start my season”.

“Every year I’ve been able to win at least one stage here (at Tirreno). This year, I wasn’t able to win but I have other goals ahead,” he said.

“The list of favourites includes others, not only me. I’ll be competing with them. So maybe if you take the measure of everything together, it went well for me.

“My condition is good. I can start my season calmly from here.”

Looking on from the sidelines will be defending champion John Degenkolb, who is still recovering from injuries suffered from a training ride crash in Spain last January when a woman drove her car into his Giant team.

But there will be no shortage of potential successors looking to join Sagan in triumphing at the end of an epic day’s racing from Milan, through the spectacular coastline of Liguria and on to the tiny principality.

Welshman Geraint Thomas, fresh from winning his first Paris-Nice, Belgian Van Avermaet, Swiss veteran Fabian Cancellara and a number of sprint specialists, including Australian Michael Matthews and 2014 champion Alexander Kristoff, all have one eye on the prize.

The race’s home straight on Via Roma, reintroduced in 2015 after a seven-year absence, means the race once again is attracting the sprinters and late breakaway specialists.

In what is his final season of competition, Cancellara, who won the final, 10.1 km time trial stage at Tirreno, admits his final participation will be “emotional”.

Cancellara has called it “the biggest lottery of the year”, suggesting it’s not just the strongest legs who will win.

Wind and weather conditions can affect how the entire peloton rides for most of the day before a series of small climbs — the Capo Mele, Capo Cervo and Capo Berta — start to liven up proceedings in the race’s final third.

But as always, the late climbs of the Cipressa and Poggio are likely to be decisive.

“Of course, you need to have the instinct and certain experience. Which I have,” added Cancellara.

“For me, though, it still stays the biggest lottery of the year.” – Agence France-Presse