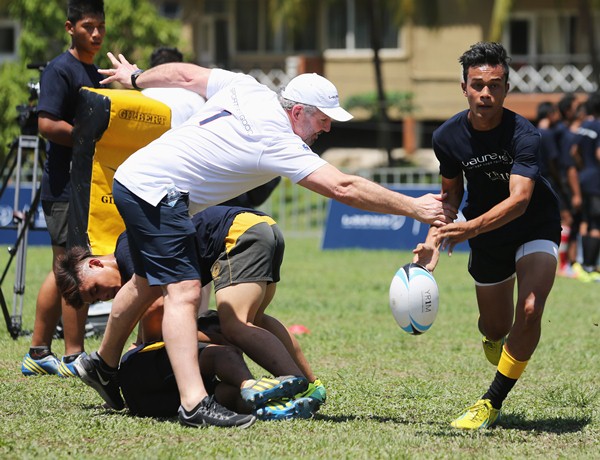 TWO of the greatest rugby legends of all time, former All Blacks captain Sean Fitzpatrick and Morné du Plessis, manager of the 1995 Springboks who won the Rugby World Cup, took part in a memorable coaching session in Kuala Lumpur, Malaysia, on the eve of the Laureus World Sports Awards.

The young adults, who benefited from the coaching session from the two Laureus World Sports Academy Members, came from the Combined Old Boys Rugby Association (COBRA), which was established in 1967 to provide an avenue for rugby school leavers to continue playing rugby. COBRA has trained over 750 teachers and works throughout Malaysia to promote the game of rugby.

Staged in co-operation with charity Yayasan Rakyat 1Malaysia (YR1M), the event promoted the use of rugby as a tool for social change. Laureus Academy Members Fitzpatrick and du Plessis joined COBRA coaches in skills sessions with the young participants. COBRA’s objectives are to use rugby to promote national integration, encourage positive values, improve self-esteem, employability and the development of the Malaysian Under-19 national team.

They were joined at the coaching clinic by Laureus World Sports Academy Member and Olympic gold-medal winning Russian gymnast Alexey Nemov, and fellow Academy Member and double Olympic decathlon champion Daley Thompson, who took part in the world-famous haka, the Maori celebration, led by Sean Fitzpatrick, to mark the end of the visit.

More than 100 youngsters, aged 6-19, took part in the coaching clinic. They gave the visitors a warm and colourful Malaysian welcome, waving flags from Malaysia, New Zealand, Russia and South Africa.