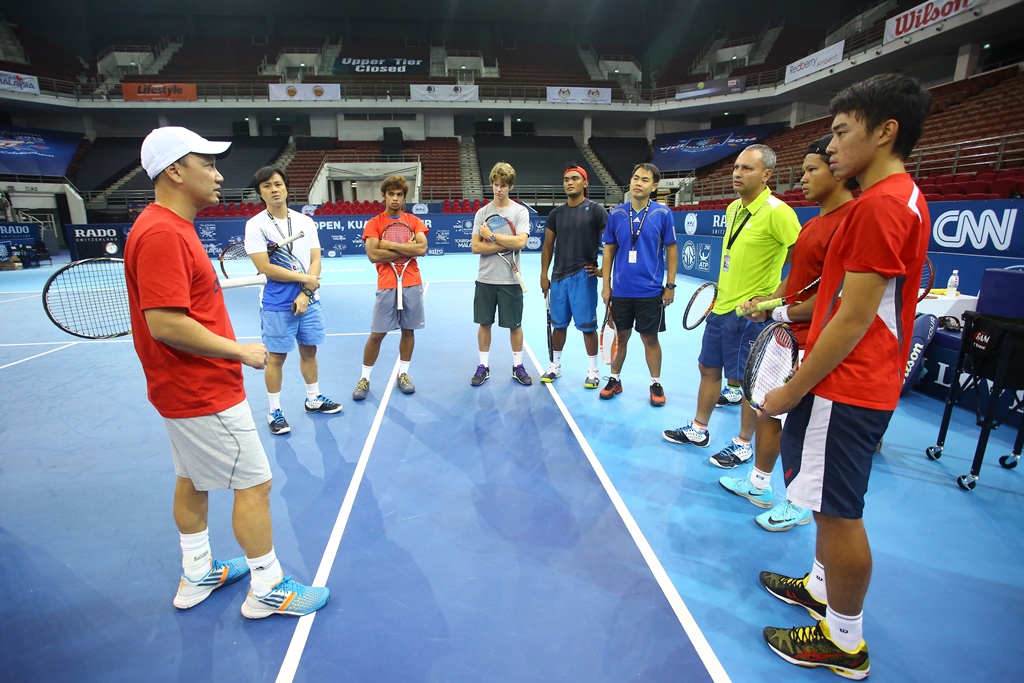 Second seed Ernests Gulbis of Latvia recovered from an error-strewn second set to defeat German Philipp Petzschner 6-3, 6-7(3), 6-1 to move into the quarterfinals of the Malaysian Open, Kuala Lumpur 2014 held here at the Putra Stadium in Bukit Jalil.

World No. 13 Gulbis is in the midst of the best season of his career, with his two titles and semifinals appearance at Roland Garros helping him break into the top 10 for the first time in June. He will face German Benjamin Becker in tomorrow’s quarterfinal.

“It was 3-1 for me and I made three stupid mistakes. That’s a lack of matches. I haven’t been playing matches since the US Open. I’ve played (Becker) once in Australia I think. If I play well, if I serve well, I think I’m the favourite,” said the 26-year-old.

German Benjamin Becker made his third tour quarterfinal in three months with a commanding 6-4, 7-6(4) victory over Frenchman Pierre-Hugues Herbert in 84 minutes.

In a match where both men served well (Becker won 74% of his service points while Herbert hit 11 aces), it was the experience of the 33-year-old world No.36 that prevailed in important points to set up his last eight tie with Gulbis.

“Gulbis obviously had a great year this year and is doing very well. Whoever wins it, it’s going to be a tough one tomorrow, but I’m looking forward to the challenge,” said Becker, who defeated Gulbis in the Australian Open three years ago.

Jarkko Nieminen made the quarterfinal of an ATP World Tour tournament for the first time since February after he upset third seed Leonardo Mayer 7-6(5), 6-4 in one hour and 39 minutes on Centre Court. The 33-year-old Finn, who also beat Mayer in Bucharest on clay, did not face a single break point in the match and won 73 per cent of his service points.

“I think I played really good tennis from the beginning to the end, and that’s what I have to do if I want to beat a guy like Mayer. I really like the conditions here, they suit my game. I hope I can continue playing like this,” said the Finn, whose career high was No.13 in 2006.

Seventh seed Pablo Andujar squandered four match points in the second set but held on for a 6-4, 6-7(6), 6-3 win over Pole Michal Przysiezny in two hours and 28 minutes.

Currently ranked at No.45 on Tour, Spaniard Andujar won his first title in three years in Gstaad two months ago and is aiming to eclipse his previous year-end best position of No.42 achieved in 2012.

Nieminen and Andujar will play each other for the first time on tour in tomorrow’s quarterfinals.

The Australian-Malaysian scratch pair put up a decent fight in front of an enthusiastic crowd but could not conjure much of a challenge against the number two seeds.

The German-Austrian pairing of Andre Begemann and Julian Knowle, who knocked out the defending champions and top seeds yesterday, moved into the quarterfinals after defeating American duo Rajeev Ram and Scott Lipsky 6-3, 6-3 in one hour.

Leonardo Mayer and defending singles champ Joao Sousa may have stumbled at the first hurdle in the singles event, but as a tandem they moved into the doubles quarterfinals with a 7-6(5), 6-3 victory over Daniele Bracciali and Oliver Marach in 86 minutes.

All four quarterfinal matchups in the singles event will be played on Centre Court beginning from 2.15pm tomorrow, with five of the top eight seeds still featuring in the indoor hard-court competition.

The 32-year-old Benneteau is higher ranked at No.28 but has yet to win an ATP World Tour title (losing in all nine career finals), while the 27-year-old Cuevas reached a career high of No.36 last month after a breakthrough year in which he picked up his first two career titles back to back at Umag and Bastad.

The second match sees Becker taking on Gulbis (not before 4.30pm), which is followed by the matchup between Nieminen and Andujar (not before 6.30pm).

In tomorrow evening’s featured match (commencing not before 8.30pm), top seeded Kei Nishikori will attempt to make the semifinals in Kuala Lumpur for the third time when he takes on Aussie Marinko Matosevic.

The 24-year-old Japanese has beaten the 29-year-old Matosevic four times in the last two years.

The remaining doubles quarterfinal matches will also be played on Court 1 tomorrow, with three of the top four seeds still in the hunt for the title.