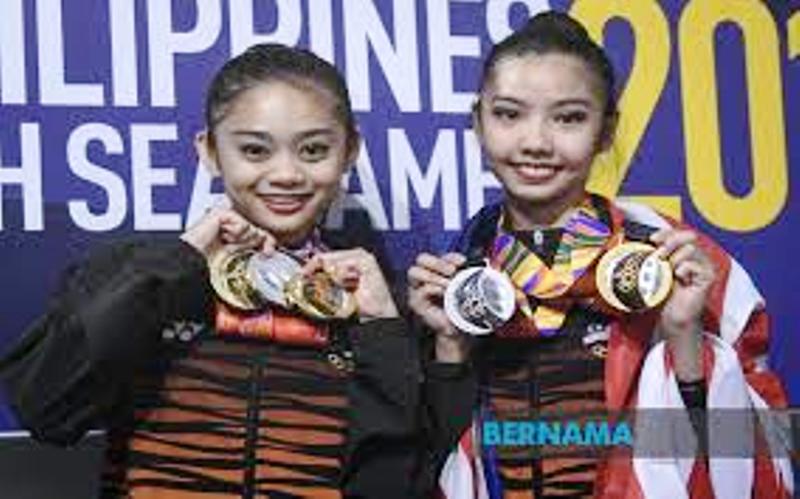 Izzah Amzan and teammate Koi Sie Yan were declared joint winners of the gold medal in the ribbon discipline as Malaysia swept to three golds, one silver, and one bronze in the rhythmic gymnastics at the Rizal Memorial Coliseum in Manila on Saturday.
The éxtra’ gold came about after the Olympic Council of Malaysia (OCM) president Datuk Seri Norza Zakaria and chef de mission (CDM) raised a protest over the earlier decision to award the gold to Sie Yan and the silver to Izzah although both were credited with the same score of 15.200.
After the strong protest, which saw the victory ceremony delayed by an hour, both Malaysians were rewarded with gold each with the bronze going to Thailand’s Nat Kulsanawong who registered 14.050. There was no silver.
For the 19-year-old Izzah was a double delight with the gold as she had earlier defended her gold in the ball discipline – with a near-flawless performance to amass 17.800 points which left her rivals in awe.
Kulsanawong settled for the silver with a tally of 16.300 with home favorite Daniela Reggie Dela Pisa taking the bronze with 15,600 points.
Sie Yan also clinched the silver in the clubs’ discipline with 16.900 behind Thailand’s Benjaporn Limpanich who took the gold in 17.150. The bronze was won by Daniela Reggie Dela of the Philippines.
There was some disappointment in the hoop with Izzah and Amy Kwan settling for the silver and bronze medals with scores of 16.500 and 15.900 respectively. Daniela was given the gold with a score of 17.750.
Malaysia ended the day on a golden note by winning the women’s group all-around (made up of the ball discipline and mixed apparatus (clubs and hoops). The Malaysian team of Chan Mei Thung, Eu Jia Xin, Koh Jei Yi, Lee Xin Yao, Lim Chyi Eah and Shak Yuki scored 40.050 points for the gold.
The silver went to the Thailand team (39.900 points) and the host the Philippines (29.150) won the bronze. – BY RIZAL ABDULLAH