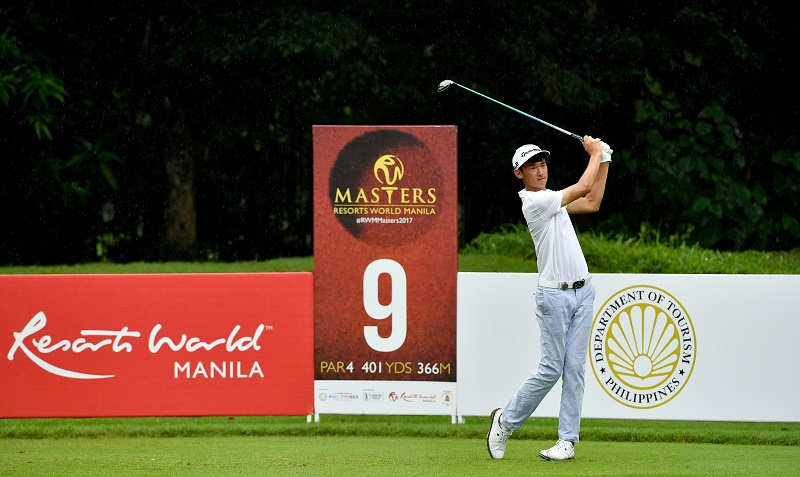 Korean-American Micah Lauren Shin joined Australia’s Scott Barr atop the leaderboard after they set the early pace by carding an opening eight-under-par 64 to share the first round lead at the Resorts World Manila Masters on Thursday.

An Asian Tour Qualifying School graduate, Shin has not missed a single cut in his last nine starts on Tour and was delighted to be leading a tournament for the first time since making the grade in January.

Shin overcame the rainy conditions in the afternoon by returning with a bogey-free card which was highlighted by eight birdies at the Manila Southwoods Golf and Country Club.

Barr, who is searching for his first Asian Tour win, also enjoyed an encouraging start. The Australian lost his Tour card last season but having seen a revival in form recently, he is hopeful of doing well at the US$1 million event, which is also the richest golf tournament in the Philippines.

Thailand’s Prom Meesawat and Arnond Vongvanij shared third place on matching 65s while defending champion S.S.P. Chawrasia of India was tied for fifth together with Canada’s Richard T. Lee, Thailand’s Chanachok Dejpiratanamongkol and Philippines’ Justin Quiban after he returned with a 66.

It was not really tough to be playing under the rain. It was just annoying and uncomfortable as we were getting all wet. But result wise, it was good. The course is not playing too long but the rain has made the greens softer. I’m happy with how I’ve played on the Asian Tour but at the same time, disappointed too as I haven’t got any top-10s so far. I’ve given myself a good chance of doing well this week and if I continue to play this way, I can do pretty well.

I played great and I putted really well. I managed to put the ball in play today and that was the most important objective. There was no wind in the morning which we rarely get here and I just made the most of the opportunities. I made a birdie in my first hole and I was off and running. My build-up towards this week was trying to get into form. I’ve been playing quite well but the scores sometimes don’t reflect that. I’ll try to go through the routine and I’ll just play my normal game and hopefully it keeps going.

It’s always good to start off with a low round. I know I have a good track record here but the most important thing for me this week is to enjoy the game and not think too much about winning yet as that will create unnecessary pressure. I hit the ball very well today and I didn’t miss any fairways. I just missed two greens. The course is playing a little bit softer this week. I can play under different conditions. Whether there’s wind or no winds, I’m okay. But I can reach the par-five easily if there are no winds.

The weather made play really difficult today with the rain coming down on and off. The ball was wet and for me, I have my prescription glasses with me and I have to take them off frequently to wipe them as they fog up very often. It has been a grind and I’m just happy I got to finish my round today with a good score. I’ve been rebuilding my swing for a while now and it has got to a point where I don’t need to think much about it anymore. I didn’t chip and putt that well earlier in the year but I seem to have got them back with my swing change. The scores and results are starting to show.

I played really well in general today. The golf course is playing a little bit differently this year. It was pretty dry, firm and running but for today, there was no wind which is a rare. It’s playing a little bit longer. I just got to keep hitting the fairways and hole as many putts as I can.

I’m very happy as I played well especially with my tee shots and putts. There was not much wind today so it was a little bit easier. I’m looking to boost my world rankings this week and I’ve done well here in the past, so there are many reasons for me to look forward to and have an enjoyable time here. The key to doing well here is your short game. I remembered making several good putts on my way to victory last year. I was playing the same way today.

Leading scores after round 1 of the Resorts World Manila Masters being played at the par 72, 7317 Yards Manila Southwoods GcC course (am – denotes amateur):