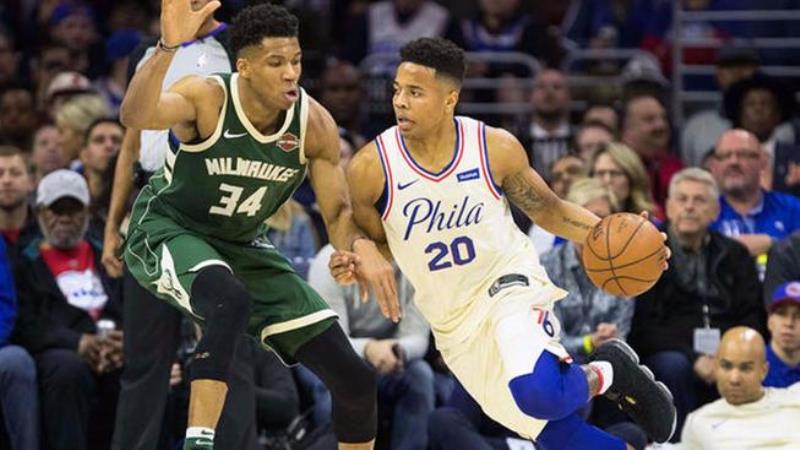 Markelle Fultz registered his first career triple-double as the Philadelphia 76ers won their 16th straight game and locked up the third seed in the playoffs with a 130-95 rout of the Milwaukee Bucks.

Justin Anderson scored a team-high 25 points and Dario Saric delivered 24 for the red-hot Sixers in one of 12 games on Wednesday marking the end of the 2017-18 NBA regular season.

The Sixers have won a franchise record 16 straight which also sets a league record for the best winning streak to end a season.

Fultz became the youngest player in NBA history with a triple-double with 13 points, 10 assists and 10 rebounds.

“It was just a matter of going out there and enjoying myself and playing confident,” Fultz said.

There was plenty to decide on the final day of the regular season but not the scoring title. Houston Rockets James Harden already had that one locked up, becoming the first player to win back-to-back scoring titles since Kevin Durant won three straight between 2010-2012.

Philadelphia will open the first round of the Eastern Conference playoffs against the sixth-seeded Miami Heat while Milwaukee will face the second seeded Boston Celtics.

Injured Sixers star Joel Embiid watched the game from the players’ bench. He took part in the warmup wearing a mask to protect a broken bone in his face.

Embiid said he will likely miss the first game of the playoffs this weekend but hopes to be back soon.

“I want to play but right now I feel like I’m not ready yet,” Embiid said. “It’s getting there. I’ve got to keep working every day. With the way it’s been progressing, I’m hopeful I’ll be back soon.”

“We brought the city back to where it needs to be,” Butler said of the Timberwolves, who earned their first playoff berth in 14 years. “We believed in ourselves. We’ve got some guys who want to win.”

Niloa Jokic tallied 35 points and 10 rebounds for the Nuggets but he missed six of his last eight shots as Denver’s late rally fell short.

Wednesday’s game was the first time since 1997 that two teams played on the regular season’s final day with the winner advancing to the playoffs and the loser being ousted.

The Timberwolves advance to play Harden’s Rockets in the first round.

“I’ll probably fall asleep tonight and wake up in the middle of the night and start crying,” said Towns. “It’ll hit me, what happened.”

The Nuggets became the third team since 2009 to miss the playoff with 46 victories, highlighting how deep the talent is in the Western Conference this season.

Also, the top-seeded Toronto Raptors will host the Washington Wizards in the first round of the Eastern Conference playoffs. The Wizards were confirmed as the Raptors’ opponent with a 101-92 loss to the Orlando Magic.

In Cleveland, LeBron James scored 10 points and then sat out the rest of the game as the Cavaliers lost 110-98 to the New York Knicks in what is expected to be coach Jeff Hornacek’s last game with the team. – Agence France-Presse