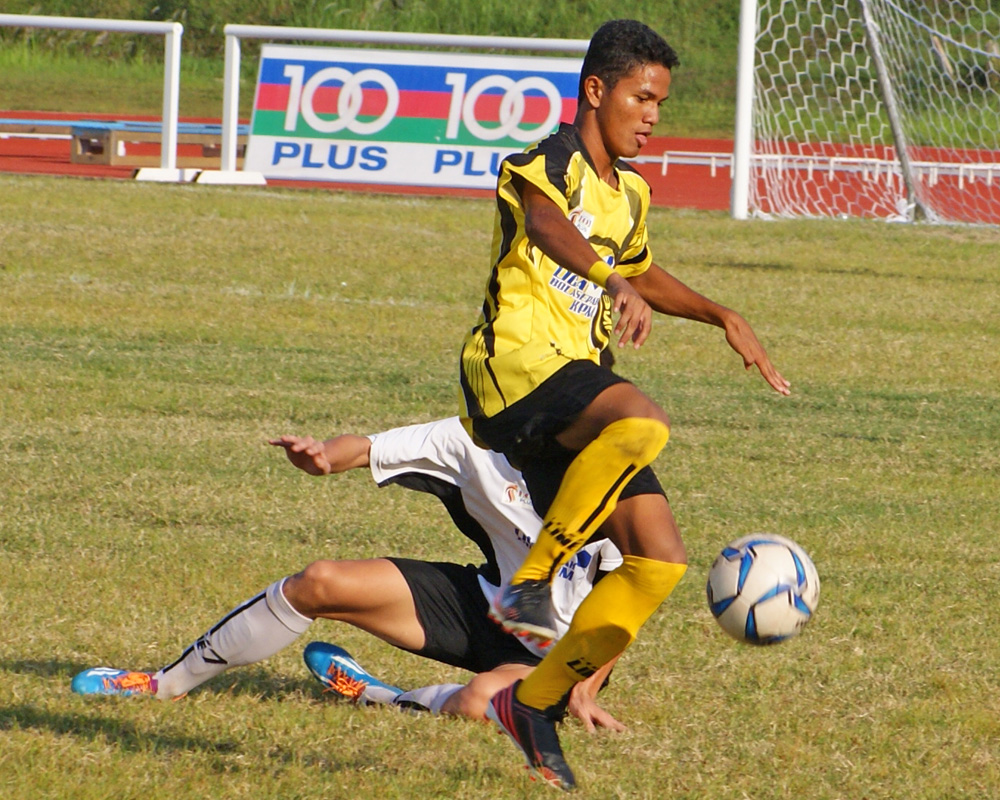 KUALA PILAH – SMK Za’ba of Negeri Sembilan is confident of winning a place in the quarter-finals of the Ministry of Education Under-17 League 2014 after staging a second-half fight back to dispose of SMK Seksyen 11 of Selangor 5-3 in a top of the table Premier League clash last weekend.

SMK Za’ba, who has been struggling to be competitive over the past several years, seems finally to have put their act together where the three points this week strengthened their position to win at least one of three places from the lower Premier League to make the cut into the final eight of the season.

The other five teams to win places into the next round would be from the higher Super League division.

“Our target this year is to make the cut to the quarter-finals and we are getting there, especially after beating the current league leaders,” said SMK Za’ba chief coach Baharom Tahir, whose team is now second at the table.

“We have been building this team from 2012 and it is only now that we are getting some results. We have been winning five matches in a row and you can see that there is an air of confidence in the squad especially in their ability to come back from falling behind.

“Our target is just to make the quarter-finals of the league this year as we have to realize that the teams from the upper division have better quality players. Nevertheless, we will still be out to at least cause an upset or two.”

Playing at home did not give SMK Za’ba the confidence they were looking for when they allowed SMK Seksyen 11 more possession which in turn allowed the visitors to strike three goals in the first half.

Muhammad Nor Iman Mazlan gave the Selangor side the lead after 18 minute as Muhammad Izzuwan Kamarol added another in the 22nd minute and Mohamad Afiq Mohd Azam, the third in the 26th minute.

But Baharom’s pep talk at the break must have done wonders when SMK Za’ba pounced into the second half full of vigour with a double from Muhamad Farhan Mohd Shahrin in the 49th and 71st minute to be followed by further goals from Muhamad Farhan Samsudin (63rd minute), Muhammad Azhar Mohd Soom (89th) and Muhamad Nabil Azizul (90th).

With the fabulous, SMK Za’ba is now on 23 points from 12 matches played – four below SMK Seksyen 11 who has picked up 27 points but who has played a game more.

On third is SMK Putera from Kelantan with 22 points from 22 matches.

Perak’s SMK Gunung Rapat were held to a 1-1 draw by SMK Seri Titiwangsa of Kuala Lumpur as SMK Datuk Peter Mojuntin of Sabah battled to a 0-0 draw by SMK Tun Hussein Onn of Johor.

IN THE MEANTIME in the Super League, SMK Tunku Anum of Kedah continued to show their domination at the top of the table when they edged SMK Seberang Temerloh of Pahang 2-1, with Mohd Yusri Mohd Farizat scoring the winner in the 70th minute.

The game was tight at the start and it was not until the 55th minute that Kedah finally broke deadlock through Muhamad Zulfadli Ammir.

But it took the home team, only eight minutes to reply with the equalizer off Muhammad Shah Amirul Mohd Zamri, before the visitors grabbed the winner at the end. 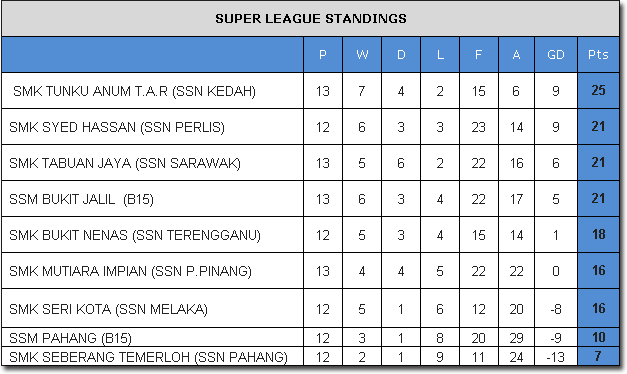 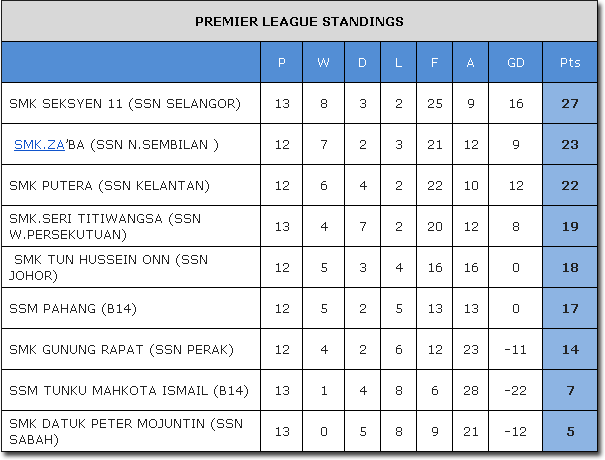