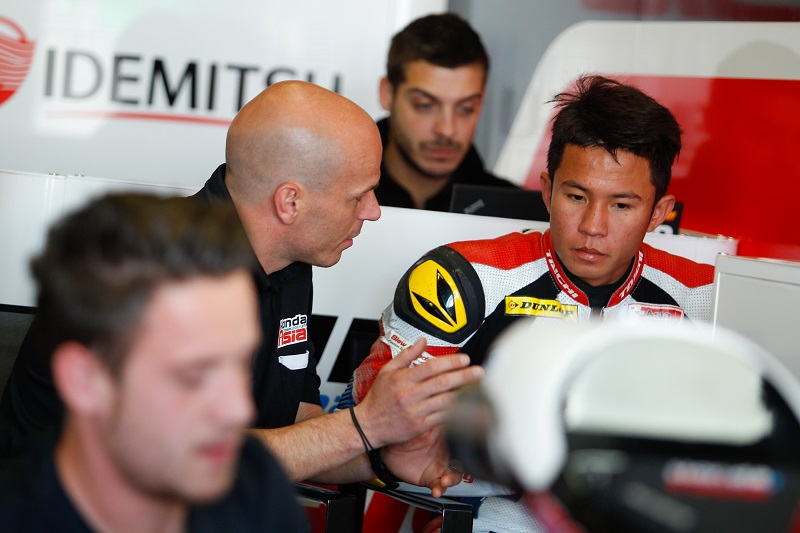 In the third Session of the 2016 Qatar GP, both of Honda Team Asia riders made steady progress with Japanese rider Hiroki Ono setting 2min07sec228, while his team mate and the world championship rookie Khairul Idham Pawi demonstrated high adaptability by arriving 2min07sec167.

Ono and Pawi continued working hard with their team to follow a good direction, and made a solid step forward both in setting and the feeling of their bike. By relocating ballast position yesterday, Ono’s bike has good agility in FP3. Ono also gained better turning by the improvement of the setting.

Pawi learned more about the racing line to go as fast as he can, and made a solid progress also in terms of the setup.

Khairul Idham Pawi (18th, 2’07.167, +1.308)
“Thanks to my mechanics, today I was able to ride more comfortable than yesterday. For sure, we still have many things to improve on setting and my riding. Anyway, we can push harder tomorrow for the qualifying to get a good lap time.”

Tadayuki Okada – Team Manager
“Like he did in previous sessions, Pawi continued to ride alone and improved his lap time, which is a good indication for tomorrow’s qualifying. Ono also set his best lap time by following other rider, which is a bit of concern for tomorrow. Anyway, I would like our riders to secure good grid positions.”