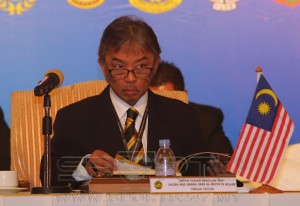 At the EGM several issues and resolutions were were raised and discussed and amendments were made to the MHC constitution. The new amendments could also see the postponement of MHC’s AGM scheduled for Nov 17.

“I confirm that I will not seek re-election,” Tengku Abdullah told a press conference.

“I was supposed to name my successor (candidate) but I have reserved my annoucement on the matter due to various factors. For one we have made some changes to the constitution. It will take some time for the Sports Commissioner office to endorse.

“We hope to get the changes done and approved before our scheduled AGM. If not we may have to postpone the AGM to a later date sometime in January.”

Selangor HA president Datuk Sri Subahan Kamal is widely tipped to take over the MHC president – handpicked by Tengku Abdullah, who is also the FA of Malaysia president.

Tengku Abdullah announced his decision to relinquish his MHC post after being elected as the new Asian Hockey Federation president – replacing the late Sultan Azlan Shah who passed away on May 28 due to illness. The Crown Prince won the post uncontested.

On a different matter Tengku Abdullah said the hunt for a foreign coach is still on as he wants A. Arulselvaraj on concentrate on the Project 2016 team which is currently competing in the Sultan of Johor Cup six-nation tournament in Johor Bahru.