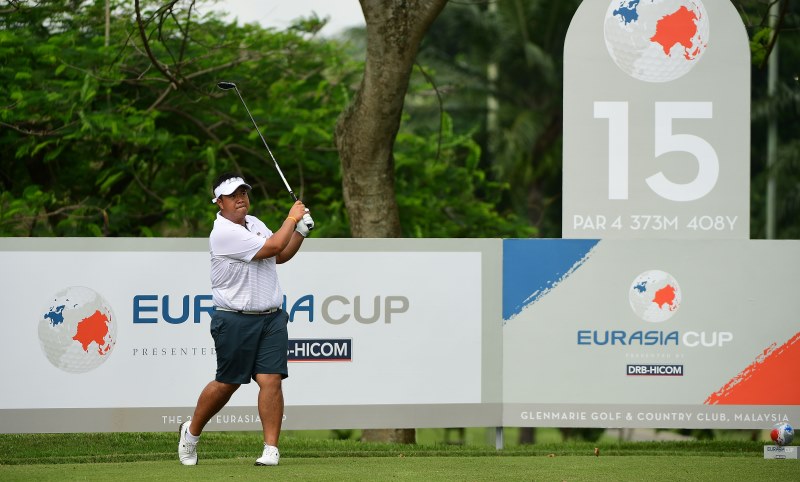 Thailand’s Kiradech Aphibarnrat is pumped-up to win the EurAsia Cup presented by DRB-HICOM as he makes his third appearance at the team match-play event which begins on Thursday.

The world number 49 is not ready to settle for anything less than a win having drawn and lost the last two editions to Team Europe in 2014 and 2016.

Kiradech, who enjoyed a sparkling run of form especially towards the end of 2017 where he ended the year inside the world’s top-50, is hopeful of carrying his winning form into his first event of 2018.

The Thai will also have the assurance of Japan’s Hideto Tanihara and Korea’s Sunghoon Kang of putting the points on the board for Team Asia when the contest gets underway on Friday.

Tanihara was part of the inaugural team event that earned a 10-10 draw with Team Europe in 2014 while Kang will be making his debut at the EurAsia Cup this week.

We have a strong team this year and I hope to use my experience from the first two editions to lead this team to victory. I know there are a lot of top players in the field this week, especially Team Europe.  But if the 12 of us can play to our full potential, it might be a tough week for them.  Anything can happen. I never look at the world rankings of my opponents or whether they have won a major or whatever. We are all very good players and if you’re not good enough, you will not even make it to the team this week. I was very nervous during the first year and I felt really young then. But it’s a new generation now and we’re hungry for a win.

It’s a big honour for me to be in the team again and I will try my best and hopefully we can win. It’s always exciting to be part of a match-play team event where you play not for yourself but for the team. Anything can happen in match-play and I believe the Team has the ability to win.

I played the course today and I think it’s a really fair course. I think the Europeans may hit it a little bit further, because they are bigger and taller than us. But this course is perfect for Team Asia too as it is kind of short and you need to hit the fairways. You got to be very sharp on the greens too. So having said that, the course conditions are very familiar to us, Asian players and I’m confident we can do well.