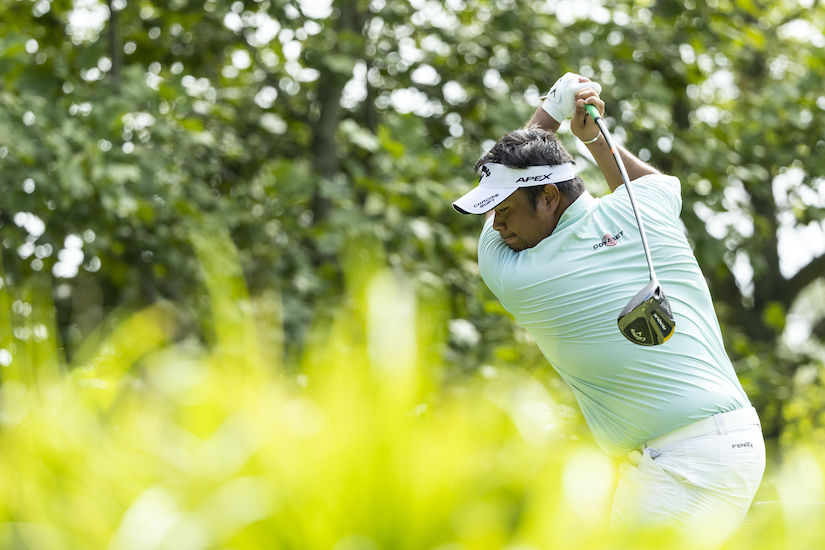 Kiradech Aphibarnrat of Thailand took a big step towards regaining his PGA TOUR card on Friday after a second round of 7-under 65 propelled him into tied second place in the Korn Ferry Tour Championship presented by United Leasing & Finance.

The 33-year-old Thai hit nine birdies against two bogeys at Victoria National Golf Club in Newburgh, Indiana to trail leader Michael Giglic of Canada (66) by two strokes in the last tournament of the Korn Ferry Tour Finals, which will award PGA TOUR cards to the top-25 players.

Korea’s Byeong Hun An, who has already secured his PGA TOUR return following the conclusion of the Regular Season last month, also carded a 65 to share second place as he chases a second win on the Korn Ferry Tour this year.

China’s Carl Yuan kept up his chase to finish No. 1 in the season-long points race after a 70, which featured four birdies against two bogeys, put him in tied 13th place, some eight shots back on 8-under. Current points leader Paul Haley II sits on 3-under going into the weekend. Finishing No. 1 grants exemptions into THE PLAYERS Championship and U.S. Open as well next season.

Kiradech, the first Thai to hold a PGA TOUR card, was delighted to hit form with his putter in what is a pressure-packed week. “I would say I got out to a good start, made birdie on the first hole and (shot) 5-under on the front. The last two weeks, my putts just didn’t drop as much as I wanted to. The first two days seem to be much better,” said Kiradech.

He failed to finish inside the top-125 on the FedExCup for the second straight season, forcing him to compete in the Korn Ferry Tour Finals, a series of three tournaments. The arrival of his first Thai caddie, Prajak Khaoprathum, in the U.S. in July has been a positive influence.

“I need a Thai guy on the bag, I need to speak some Thai, and I’m not enjoying my work at all,” said Kiradech, who was a regular name in the world’s top-30 several years ago before losing his form.

“When you’re playing good by yourself, you’re not celebrating with anyone. When you’re playing bad, staying with yourself again, you just can’t explain anything to anyone. When I got him at Rocket Mortgage (Classic) and feel I’m enjoying playing more golf, playing good at Wyndham, I still can say I’ve played great golf the last few weeks even though I finished 55th (in Boise) and missed the cut last week, I’m still striking the ball really solid.

“The goal for me this week, I think I have to be top six, top seven, or top five, I don’t know. I don’t want to focus on that. Even if I can’t get the job done, I could go back and play DP World Tour or the Korn Ferry Tour. I’ve been playing poorly the last few years, from top 30 in the world to 300-something.”

Like Kiradech, Korea’s An is also a former top-30 golfer before losing his PGA TOUR status for the first time in 2021. However, he successfully regained his playing rights on the world’s elite circuit and now hopes to wrap up his season on a winning note.

“You can tell by the score that I played decent yesterday and played pretty good today. Overall, my long game is solid. I hit a lot of fairways. That was my goal this week, to hit a lot of greens and fairways. I’m quite happy with where I am right now,” said An, who hit 8 birdies, including three closing birdies.

“It’s (TOUR card) locked but you still want to finish as high as you can. These last three weeks all the graduates have been playing pretty well. I feel like I’ve played pretty well the last two weeks, I finished 20th then 14th or whatever and then I think I moved down one spot. That tells you how tough it is. I try to tell myself in the mornings that, ‘It’s going to be a good day,’ every day and it seems to be working. I just need to keep doing that for two more days.”