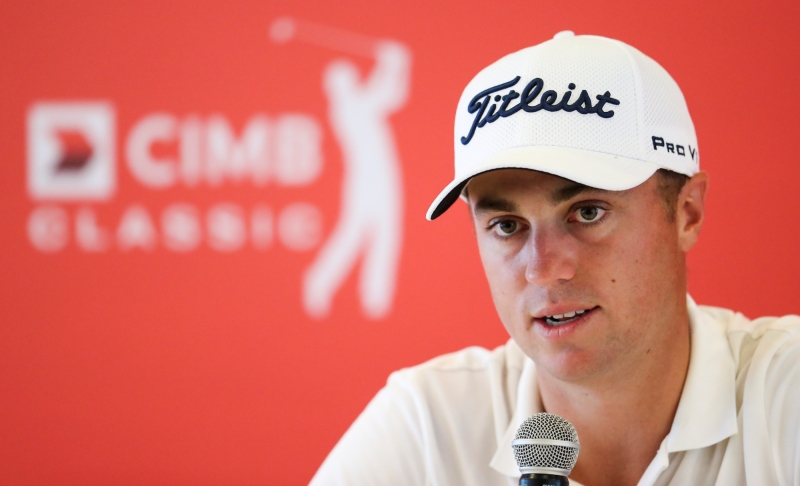 American golf star Justin Thomas headlines the US$7 million CIMB Classic on Thursday, looking to become the first golfer to win the tournament three times at a venue which he holds the lowest scoring average.

Coming off another strong campaign in the recently concluded 2017-18 PGA TOUR Season where he won three times, the 25-year-old is aiming to launch his 2018-19 campaign off on a winning note on the West course, which recently underwent a renovation programme, where he is a staggering 60-under-par over 12 rounds.

“It’s just a place that I’ve obviously played well. I’m comfortable. I think being a little bit of a longer hitter you have an advantage, but I mean, the fact of the matter is that I’ve just played well the years I played here.  I think my wedge game is a strong suit of mine and you have a lot of wedges out here, so I’ve been able to take advantage of that,” said Thomas.

Now a nine-time PGA TOUR winner, a major champion and even a World No. 1 for a brief period in May, Thomas looked back at how the early wins in Malaysia provided the launchpad to his blossoming career.

“Anytime you win three times in a season, it’s still a pretty good season. Obviously not winning a major was a big difference and not winning the FedExCup, but I played plenty well enough last season to win the same amount of times. You know, when you win that many times in a year, you have a lot of things go your way.”

While Thomas will be shooting for a hat-trick at the CIMB Classic, which is the only PGA TOUR tournament in Southeast Asia and the first of three PGA TOUR tournaments in Asia this month, title holder Perez will be hoping to maintain a trend of winners winning in back-to-back years. American Ryan Moore won the CIMB Classic in 2013 and 2014 before Thomas enjoyed his double here in 2015 and 2016.

“I love coming here, my caddy loves coming here. We’ve had fun ever since the first time we came a lot of years ago. I love this course, I love the greens. I love the greens at Mayakoba, they’re the exact same and I’ve won both of them. So I get confident with the putter, it’s a big thing for me,” said Perez.

“I think over the last five years this tournament has really become one where the fields have gotten better and better. I think guys are excited to come over here. I’m not surprised that the strength of field is getting better. We’ve got a great sponsor in CIMB and unbelievable tournament host, Todd Rhinehart (PGA TOUR Vice President and Executive Director), so I’m not surprised.”

Horschel, the 2014 FedExCup Champion, arrived for the CIMB Classic in top form after finishing fifth in the 2017-18 FedExCup final standings following a runner-up outing in the TOUR Championship, the season finale. It culminated a strong season for Horschel, who finished T3 in two other FedExCup Playoff events.

A five-time PGA TOUR winner, Horschel will play in his third CIMB Classic following appearances in 2013 and 2014 where he finished T11 and T37 respectively. “I haven’t been back in about four years, so the course I knew had always played really a lot of low scores.  To see the golf course with the new Bermuda grass, the course is in unbelievable shape.  It’s going to play a lot tougher. It’s going to be a great test of golf,” Horschel said.

India’s Anirban Lahiri, the last man to get into the elite field on Sunday, is hoping to contend once again in the CIMB Classic. He finished T10 and T3 in the last two years here and also won the Malaysian Open on the West course in 2015.

“I’m quite relieved actually,” said Lahiri, now an established PGA TOUR member. “I’m going to familiar territory, I play well here, I know what to do, I know the golf course, the weather, how far the ball’s going to go, pin positions.”

Already a two-time International team member, Lahiri is keen ensure he makes the Presidents Cup again for December, 2019 under the captaincy of Ernie Els who is also in the CIMB Classic field. “I know how badly he wants us to win the Cup back. It rubs off on all of us. Any Presidents Cup is special, but this time we’re going to be playing on home ground, on home turf rather, and I think it’s going to be different. It’s very, very important.”