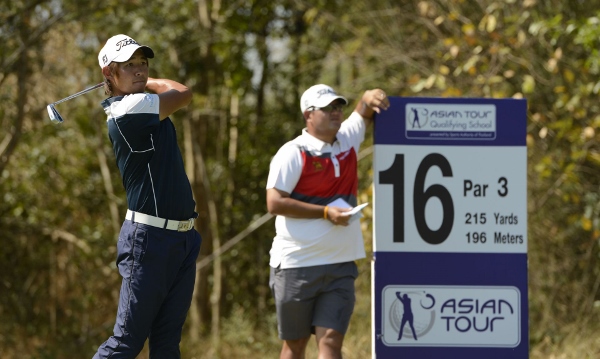 Malaysia’s Arie Irawan and Thailand’s Pavit Tangkamolprasert maintained their sparkling form when they moved to grab a share of the halfway lead with Thailand’s Sattaya Supupramai at the PGM Sabah Championship on Thursday.

Arie and Pavit matched their opening rounds of three-under-par 69s while overnight leader Sattaya carded a 71 to compile a two-day total of six-under-par 138 at the Sabah Golf and Country Club.

Nils Floren of Sweden stayed one shot back of the leading trio in fourth place with Malaysia’s Shaifubari Muda, who recorded the day’s lowest score of 65, at the RM250,000 (approximately US$80,000) event.

China’s Ye Jian-feng and Australian Blair Wilson shared sixth place on matching 140s while reigning Order of Merit champion, Nicholas Fung of Malaysia, signed for a 74 to tie in 45th place at the PGM Sabah Championship, which is the 15th leg on the Asian Development Tour (ADT) schedule this season.

Arie hopes to ride on his recent run of good form as he chases for his maiden win on the burgeoning Tour this week. The young Malaysian, who joined the play-for pay ranks early this year, has secured three top-10 finishes so far this season.

“My form has been really good. I guess the hard work that I’ve put into my game is starting to pay off. I want to ride on that wave of good form and I’m looking forward to the next two rounds,” said Arie.

“I’ve had my ups and downs this season. I have to accept whatever I do and keep finding ways to get better and closer to winning. Putting myself in contention seems like a great start,” added Arie.

Pavit, who claimed his second ADT title in Malaysia last month, stayed on course for another great showdown as he aimed to boost his rankings on the Order of Merit. He currently sits in third place courtesy of one victory and four top-five finishes.

“I’m very happy with my performances so far. Everything went well for me. My driver was solid and my putting was good. Today was windier as compared to yesterday so I am more than pleased to be able to shoot the same score today,” said the 25-year-old Thai, who marked his card with four birdies against one bogey.

The halfway cut was set at six-over-par with a total of 54 players progressing into the final two rounds, marking the highest halfway cut on the ADT this season.