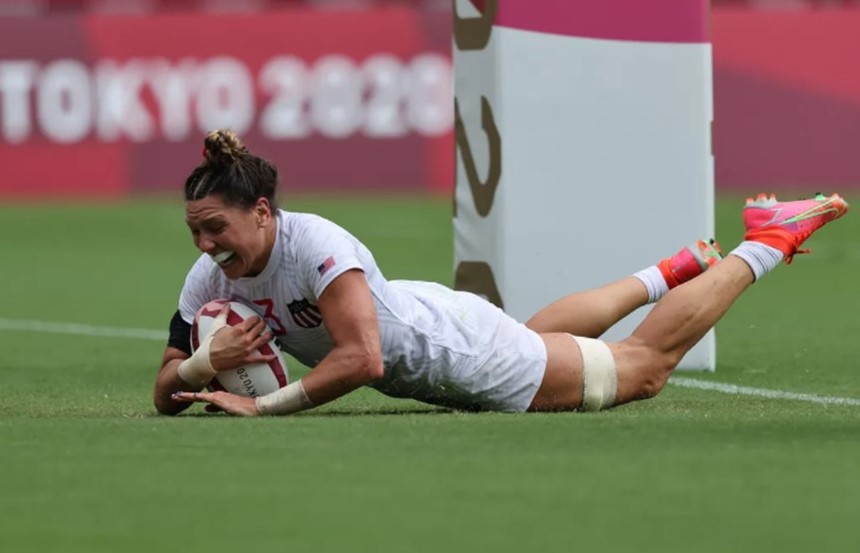 Women’s rugby sevens again proving to be an Olympic hit with its fast-paced, action-packed style and unpredictable results

There was high drama and electrifying performances on and off the pitch during the final pool phase session of the women’s Olympic rugby sevens competition, which saw the last match of the session delayed by 90 minutes due to lightning in the vicinity of Tokyo Stadium.

France, New Zealand and the USA maintained winning records as the line-up for the women’s medal quarter-finals was confirmed at Tokyo Stadium.

The USA inflicted a first Olympic defeat on Rio 2016 gold medallists Australia who held a 12-0 lead early in the second half of their meeting with the USA, but were unable to hold on as the Women’s Sevens Eagles scored two converted tries to secure an historic win.

Their reward is a quarter-final against Great Britain at 18:30 local time (GMT+9), while Australia will take on Fiji, who have impressed so far, at 18:00.

New Zealand rounded off their Pool A campaign with a win over the Russian Olympic Committee team (ROC) and the two teams will meet again in the opening quarter-final at 17:30 local time.

The final last-eight match will kick-off at 19:00 local time and features France, who topped Pool B, and China.

Canada, who won bronze at Rio 2016, did not qualify for the medal quarter-finals on points scored and will instead contest the ninth-place semi-finals, which are due to take place at 16:30 and 17:00 local time (GMT+9).

France made sure of top spot in Pool B with their biggest ever defeat of Canada, beating the  Rio 2016 bronze medallists 31-0 in the second match on day two.

Séraphine Okemba gave France the perfect start at Tokyo Stadium when she touched down after just 60 seconds, and Anne-Cécile Ciofani and Jade Ulutule both went over the try line as Les Bleues built a 19-0 lead at the break.

Canada worked hard to find a way back into the match, but France held firm and added gloss to an impressive victory when Carla Neisen and Chloe Jacquet scored tries in the final two minutes.

In the opening match of the day, Reapi Ulunisau became the first player, male or female, to score four tries in an Olympic sevens match as Fiji qualified for the medal quarter-finals with a 41-5 win over Brazil.

Brazil’s Bianca Silva scored the first try of the match, but it appeared to jolt the Fijiana into life as Alowesi Nakoci scored and Ulunisau added two more tries before half-time.

Fiji dominated the second half and improved their points difference as Ana Maria Naimasi, Ulunisau (twice) and Laisana Likuceva all crossed the try line.

To put Ulunisau’s haul into some context, no Fijian player had previously scored an Olympic hat-trick in either the men’s or women’s tournaments.

The USA recovered from a 12-point deficit with five minutes to go to beat defending champions Australia and qualify for the medal quarter-finals atop Pool C.

Australia, who drew with the USA in the pool stage of Rio 2016, built a 12-0 lead as Sharni Williams and Demi Hayes touched down either side of half-time.

But, Cheta Emba gave the USA hope with just over four minutes remaining before co-captain Abby Gustaitis scored under the posts to complete a memorable comeback.

China knew they had to beat Japan by at least 19 points to join Australia and the USA in the last eight and they did just that, running in five tries to win 29-0.

Less than 30 seconds were on the clock when Xu Xiaoyan crossed for her first try of the match, and Wang Wanyu added a second before Xu completed her brace.

Tang Minglin powered over after the break to make the score 24-0, and there was still time for Yang Feifei to add a stunning fifth try for China.

Jasmine Joyce scored two of Great Britain’s five tries as they confirmed their place in the medal quarter-finals with a 31-0 defeat of Kenya on day two.

Joyce made Kenya pay for kicking to her in the second minute as she span away from two defenders to score in the left corner. Abi Burton added a second from close range before Joyce completed her brace on the stroke of half-time.

Kenya remained committed in the second half, but Great Britain made sure of victory with tries from Megan Jones and Lisa Thomson.

New Zealand remain unbeaten in the tournament so far after they beat the ROC 33-0 in the lightning-delayed final match of the pool stage.

Ruby Tui scored two tries in the first half to give the Black Ferns Sevens a 14-0 lead at the interval. Portia Woodman crossed for her 12th Olympic try early in the second half, before Stacey Fluhler touched down twice in the closing stages.

The ROC ended on the same points difference and try difference as Canada, but qualified for the medal quarter-finals as they had scored two more points than the North Americans across the pool stage. – WORLD RUGBY