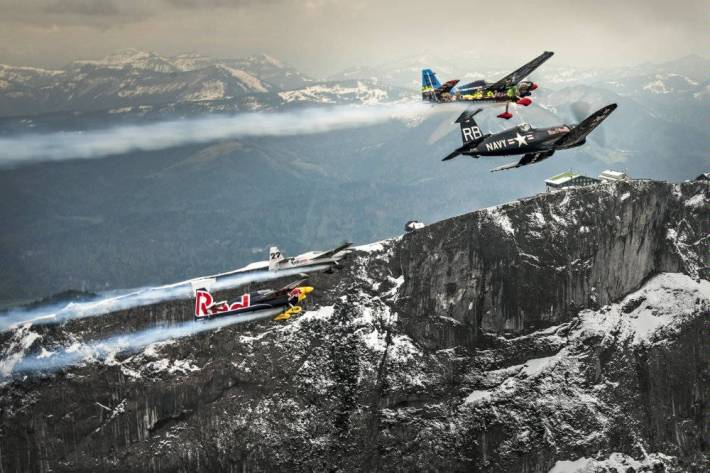 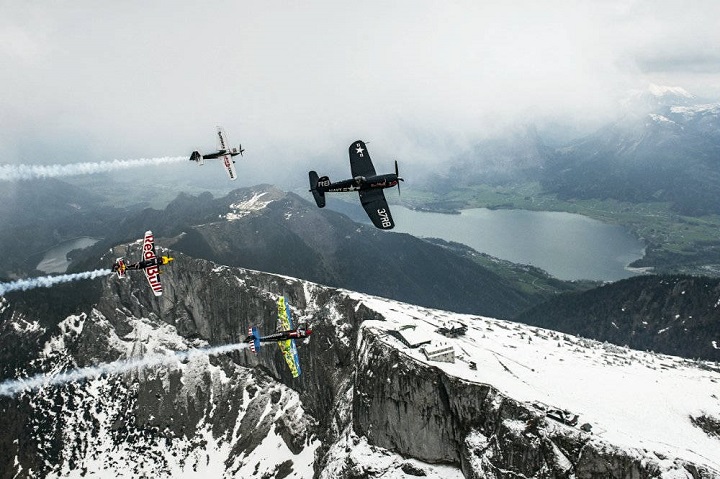 With just days to go before the 2016 Red Bull Air Race in Spielberg, Austria this weekend, world champion race pilot Hannes Arch shared a seldom-seen view of the mountains he calls home in a spectacular flight with Czech contenders Martin Šonka and Petr Kopfstein.

The second stop of the 2016 Red Bull Air Race World Championship ­– coming to Spielberg, Austria this weekend – marks a literal high point: at 677 meters above sea level, the famed Red Bull Ring claims the top elevation of the eight-race season. Ahead of training at the state-of-the-art Formula One track, home-country hero Hannes Arch took Czech pilots Martin Šonka and Petr Kopfstein even higher with a personal tour of the mountains he calls home.

An added thrill: Joining the flight was the historic Chance Vought F4U-4 “Corsair” aircraft – one of only about 15 Corsairs left in the world – that’s part of the vintage fleet curated by The Flying Bulls organization at the Hangar-7 aircraft museum in Salzburg.

The Austrian Alps provide some of the most spectacular vistas on the planet, and viewing them from their glass-enclosed cockpits allowed the pilots to experience the full power and majesty of nature. An expert mountaineer as well as an elite competitor in the racetrack, Arch feels a deep connection with the Alps and revealed breathtaking angles of famous crags like the Schafberg, with its surrounding lakes, and the towering twin peaks of the 2,458-meter Bischofsmütze.

A Styrian native who won the World Championship in 2008, Arch will be looking for his first-ever home victory when the Red Bull Air Race visits Spielberg for the third time on 23-24 April. To earn it, the Austrian will have to battle not only Šonka and Kopfstein – who expect crowds of supporters from the Czech Republic – but 11 more pilots in a talent-packed field that includes Australia’s Matt Hall, who was the overall runner-up in 2015, and the men currently placed first and second in the standings, Nicolas Ivanoff (FRA) and Matthias Dolderer (GER).

Book your own peak experience: Tickets for the seven remaining stops of the 2016 Red Bull Air Race World Championship, including the showdown in Spielberg, are on sale now. For more information on tickets and all the latest, visit www.redbullairrace.com