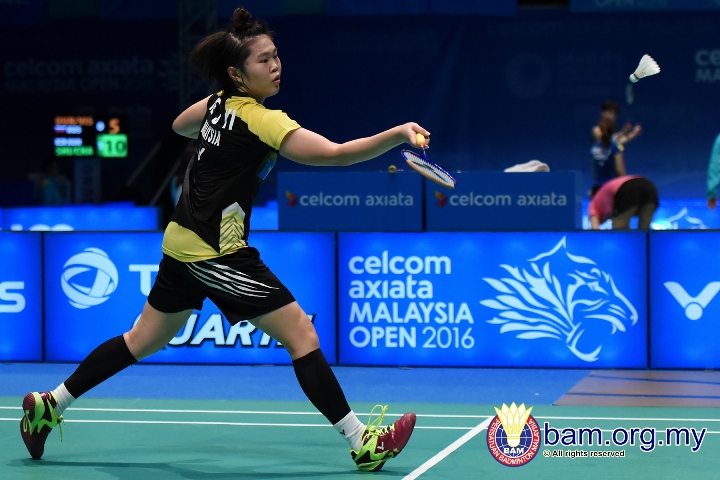 Malaysia’s quarter-final hopes in the Uber Cup went up in smoke as they fell to a 3-2 defeat to Denmark in a crucial Group A match in Kunshan, China on Tuesday.

The defeat was a crushing blow to the Malaysians as it was their second loss in as many matches, having lost 5-0 to defending champions China in their opening match on Sunday.

It was a touch and go affair in the match against Denmark and the match could have gone either way after 16-year-old world junior champion Goh Jin Wei once again showed her talent to narrow the deficit as the Danes looked like running away with an easy win by winning the first singles and the first doubles.

Jin Wei fought a 47 minute battle to subdue Mette Poulsen 21-18, 21-13 win for Malaysia’s first point. Much was expected from Malaysia’s No 1 woman shuttler Tee Jing Yi but she lost tamely 21-11, 21-11 to Line Kjaersfeldt in 33 minutes in the first singles.

The Danes, who also denied the Malaysians in the last edition in 2014 at the same state, went 2-0 up through their No 1 pair Christinna Pedersen-Kamilla Rhytter Juhl in the first doubles.

However, the Danish pair, ranked No 5 in the world, was made to struggle by Malaysia’s scratch pair of Amelia Alicia Anscelly-Woon Khe Wei for their 21-16, 21-17 win in 47 minutes.

Another Malaysian scratch pair – Goh Liu Ying-Vivian Hoo made it all square they came back from a set down to beat Maiken Fruergaard-Sara Thygesen 18-21, 24-22, 21-12 after a titanic 74 minute battle.

Denmark 2 Malaysia 2 and the stage was set for the decider but Ho Yen Mei could not sustain the pressure and surrendered despite taking the first set 24-22. The Malaysian lost the next two sets 21-13, 21-14.