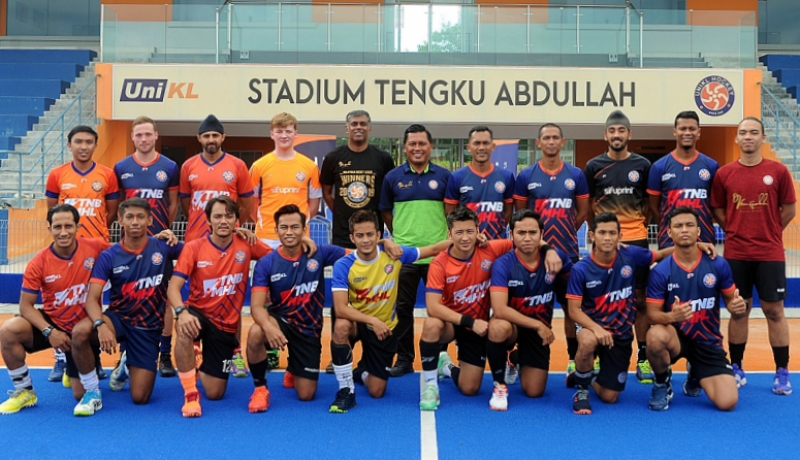 Universiti Kuala Lumpur (UniKL) will continue its journey in the TNBMHL 2020 Premier Division with renewed hope and optimism.

Leaving the bitter-sweet memories of 2019 behind following the joy of clinching the Premier League title for the first time but missed out on the opportunity of defending the TNB Cup in the final against Terengganu Hockey Team (THT), UniKL Director of Sporting Club and Assistant Manager Jaldin Ahmad said the 2019 League champions will have to hit the ground running beginning with the Charity Shield match against Terengganu Hockey Team (THT) tomorrow at the National Hockey Stadium in Bukit Jalil.

“We are maintaining almost all of the players who featured in the 2019 season with the addition of Tengku Ahmad Tajuddin Tengku Abdul Jalil and three players from the development squad. For the first time, we have also set our target of a double championship after winning the TNB Cup in 2018 and Premier League last year,” said Jaldin.

Former international Tengku Ahmad Tajuddin, who has a load of international experience, will also become a staff member of UniKL Sporting Club to enhance activities planned for 2020 and beyond.

UniKL retained the services of Irish goalkeeper David Harte and Australians Kieran Govers and Timothy Deavin while welcoming former Dutch international Roel Bovendeert. Govers and Deavin arrived in Kuala Lumpur today while Harte is only expected to join the team on January 15.

Bovendeert, however, is all too familiar with the Malaysian brand of hockey. He captained the Dutch Under-21 side that defeated Malaysia 7-2 in the third-place playoff of the 2013 Junior World Cup in New Delhi, India to win the bronze and also scored Netherland’s opening goal.

Team captain Marhan is equally upbeat for tomorrow’s crucial encounter against THT when he said: “It is important that win this match and take three full points. THT has always been a good side and we have played them many times. It is going to be another close encounter.”

Bovendeert, a forward in the Dutch national team, said he learned a lot about UniKL and the MHL from former Netherland international players who played for UniKL before.

“They spoke highly of UniKL and the opposition teams. It’s a good league and I’m looking forward to having an enjoyable moment,” said the 27-year-old Bovendeert, who represented the Netherlands senior team in 2018 Champions Trophy, Euro Hockey League and FIH Pro League.

Meanwhile, UniKL Hockey President Dato’ Amir Azhar Ibrahim believes it will be a lot harder to maintain the unbeaten run of 11 wins and one draw en route to the league championship last season.

The Malaysian Hockey Confederation had recently ruled that Premier League teams are allowed to registrar four foreign players in the 2020 MHL season instead of six as the case of last year.

Dato’ Amir opined that the restriction on the number of foreign players from six to four does not, in any way, pose as a disadvantage to UniKL or the other teams.

“It is a balanced equation for all the teams in the League. Furthermore, it is also a wise move that will allow us to field more local players, especially those from the development squad who will benefit from this exposure,” he added.