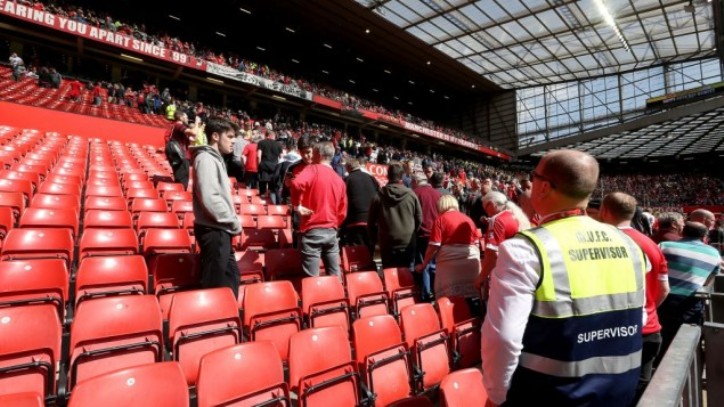 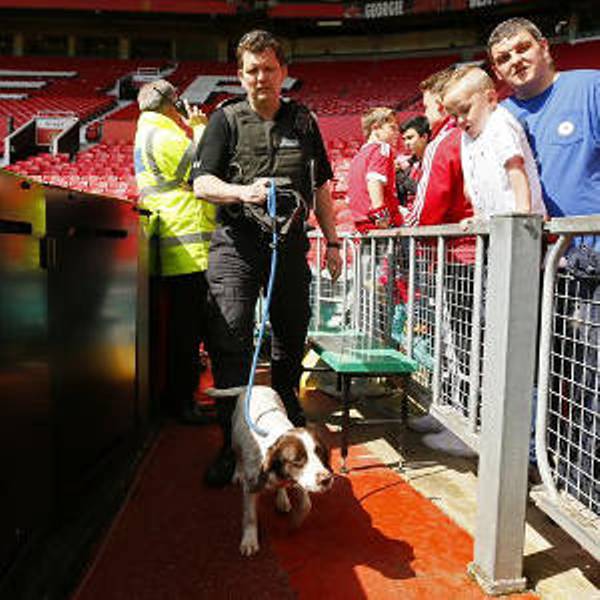 Manchester United’s final game of the Premier League season against Bournemouth on Sunday was abandoned following a security alert at Old Trafford, as Arsenal snatched second place in the table from rivals Tottenham Hotspur.

What should have been a celebratory last weekend of the league season around the country was overshadowed as bomb disposal experts were called to carry out a controlled explosion on a suspicious package at Old Trafford.

The Stretford End and Sir Alex Ferguson Stand were evacuated as the match was called off 20 minutes before the scheduled 1400 GMT kick-off in Manchester, with United later confirming a security alert caused the abrupt cancellation at the 75,600-capacity stadium.

“Due to the discovery of a suspect package in the North-West Quadrant of the ground, the match with Bournemouth has been abandoned today on police advice,” a United spokesman said in a statement.

By 3.15pm local time the remaining parts of Old Trafford were evacuated and shortly before 4pm an Army bomb disposal unit van was seen arriving at the stadium to carry out a controlled explosion.

The Premier League said the match would be rearranged for “as soon as practically possible”, although with United due to face Crystal Palace in next Saturday’s FA Cup final and Euro 2016 warm-up fixtures scheduled for the following week there is little room for manoeuvre.

“When it comes to matters of security it is obviously right that Manchester United and the Premier League place the safety of supporters and employees foremost,” a Premier League statement read.

Despite the worrying scenes at Old Trafford, the other nine matches went ahead as planned.

Completing a bad day for United, Manchester City drew 1-1 at Swansea City to effectively guarantee fourth place and Champions League qualification at the expense of their local rivals, who are three points behind them with a goal difference of only +12 compared to +30 for Manuel Pellegrini’s men.

City took the lead as Kelechi Iheanacho slotted home in the fifth minute after Sergio Aguero’s shot was pushed into the young Nigeria striker’s path.

Swansea equalised in first-half stoppage time through Andre Ayew, whose free-kick deflected in off City midfielder Fernando, but the visitors held on to ensure Pellegrini departed on a high, with Bayern Munich boss Pep Guardiola to replace him in the close-season.

“I wanted to win the Premier League, but the atmosphere from February when the club announced the new manager was maybe not the best,” Pellegrini said.

“The only option was to get to the Champions League for next year.”

After losing the title to Leicester City, Tottenham have also wasted a chance to finish above Arsenal for the first time since 1994-95.

Georginio Wijnaldum and Aleksandar Mitrovic put Newcastle in control before Erik Lamela got one back for Tottenham.

Mitrovic was sent off after 67 minutes, but Wijnaldum stroked home a penalty, with Rolando Aarons and Daryl Janmaat scoring late on to compound Tottenham’s misery.

“I would like to apologise to our fans. It’s my worst day as a manager. We were on holiday. It’s unbelievable,” Pochettino said.

Arsenal gleefully seized on Tottenham’s woes with an Olivier Giroud-inspired demolition of Villa at the Emirates Stadium.

France striker Giroud bagged a hat-trick, with the goals coming in the fifth, 78th minute and 80th minutes before an own goal by Villa ‘keeper Mark Bunn.

At Stamford Bridge, Leicester brought the curtain down on their fairytale season with a 1-1 draw against Chelsea.

Everton looked revitalised by the sacking of much-maligned manager Roberto Martinez as they defeated relegated Norwich City 3-0 at Goodison Park thanks to goals from James McCarthy, Leighton Baines with a penalty and Kevin Mirallas.

Southampton booked a Europa League place with a 4-1 thrashing of Crystal Palace at St Mary’s, with the goals coming from Sadio Mane, Graziano Pelle, Ryan Bertrand and Steven Davis.

Seventh-placed West Ham United were beaten 2-1 at Stoke City, which means they need sixth-placed United to defeat Palace in the Cup final to qualify for the Europa League.

Liverpool warmed up for Wednesday’s Europa League final against Sevilla in Basel with a 1-1 draw at West Bromwich Albion.