Home International US One Captures Championship in Newport 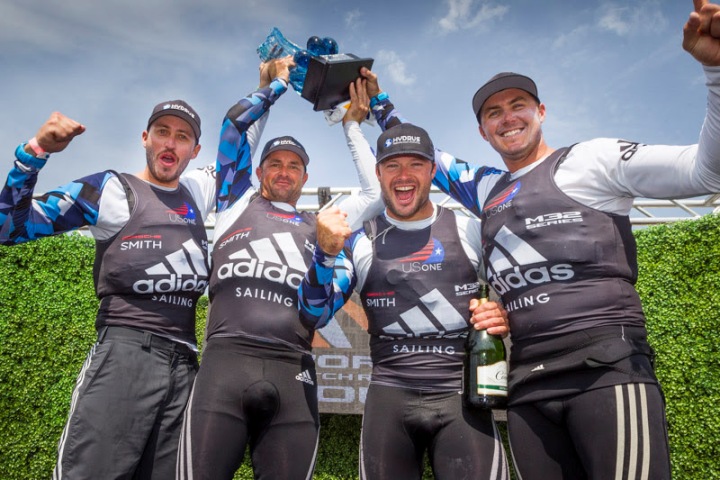 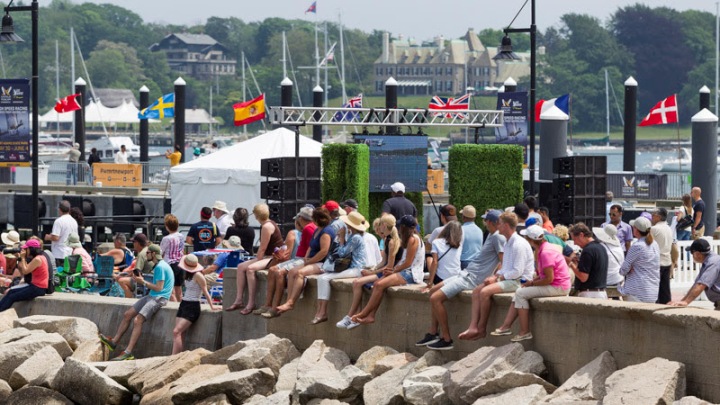 After an all but washed out penultimate day of the World Match Racing Tour Newport, Newport laid it on with Taylor Canfield and his US One team claiming the Championship.

The organisers were able to run the complete schedule of semi-finals and finals. Throughout this the competing teams fought tooth and nail on their nimble hull-flying M32 catamarans, bringing gasps ranging from excitement and euphoria to shock from the crowds assembled round the Fort Adams race course.

If there were still any doubts about the new look World Match Racing Tour – the change to catamarans and new courses, etc – today they were fully allayed.

“It has been brilliant,” said Håkan Svensson, owner of the World Match Racing Tour. “We have had all of the conditions: It has been foggy, windy, there’s been no wind, there’s been lead changes, obstacles in the course and some of the teams haven’t found their way around the course. There has been everything: A fantastic and enjoyable week.”
Worthy winner US Virgin Island skipper Taylor Canfield and his US One Team comprising Chris Main, Hayden Goodrick and Ricky McGarvie, overcame New Zealand’s Phil Robertson’s WAKA Racing 3-1, but not without drama by the cart-load. Having now won two M32 events in succession on the World Match Racing Tour as well as dominating the M32 Scandinavian Series last season, Canfield’s team surely now represents the benchmark among M32 campaigns.

Canfield attempted to explain their success: “We have put the time in, we’ve been pushing hard and making sure that we are learning throughout all of this, including all the qualifying events, to make sure that we continually grow as a team, which is important to us.”

In today’s final Robertson claimed the first match, but Canfield then won the next three to clinch first prize. While Canfield ultimately prevailed, there were many many occasions when it could have gone the opposite way.

In the final, deciding fourth race, Canfield had aggressively and repeatedly luffed Robertson out of the start. Finally, as both boats ran back downwind, attention focussed on Canfield as, incredibly, for a second time in the finals, he hooked a mooring buoy located in the middle of the course.

What many failed to notice was that while this was happening Robertson had passed the wrong side of the first reaching mark of the course. The Kiwi skipper led around the course oblivious to this until being informed while rounding the final mark…

“We obviously missed the first mark so technically we never sailed the first lap, so they were still waiting for us to do that… which was a little bit interesting.” Robertson explained later once he’d come to terms with it. “In the heat of the moment people were making mistakes like that and the courses are a bit new and different to everyone. But that was a big, costly mistake…”

An equal eye-opener was the second race. This Canfield somehow managed to win, despite picking up two penalties and there being two collisions along the way.

Earlier both semi-finals matches had been decided 2-1 with Canfield overcoming Ian Williams’ GAC Pindar team and Robertson beating France’s Yann Guichard and his Spindrift racing crew. Williams subsequently came out on top in the best of one Petit Final, to secure third place overall.

Håkan Svensson told the assembled crowd at the prize giving ceremony: “It is great to bring the World Match Racing Tour to Newport. It is one of my most favourite places on the planet. It has been a long time, since I came here for the first time in 2010 with Puma. To see everyone who is so interested in sailing to come out and ask questions is such fun. Thank you so much.”

The first, second and third placed finishers today walked away for the World Match Racing Tour Newport with prize money of US$ 33,000, US$ 23,000 and US$ 18,000 respectively.

All eyes are now on the final event of the season, the World Match Racing Tour Finals in Marstrand, the picturesque island on Sweden’s west coast over July 4th-9th. This event features the distinct incentive of a winner-takes-all first prize of a cool US$ 1 million as well as the Match Racing World Championship title.

“There will be more on for the finals in Marstrand,” warns favourite Taylor Canfield. “Everyone is going to want it that much more when that much money comes into play and that is going to change people. But if we can stay just as neutral as we can and do what we’ve done for the last couple of events, then we’ll have got a good shot at it.”