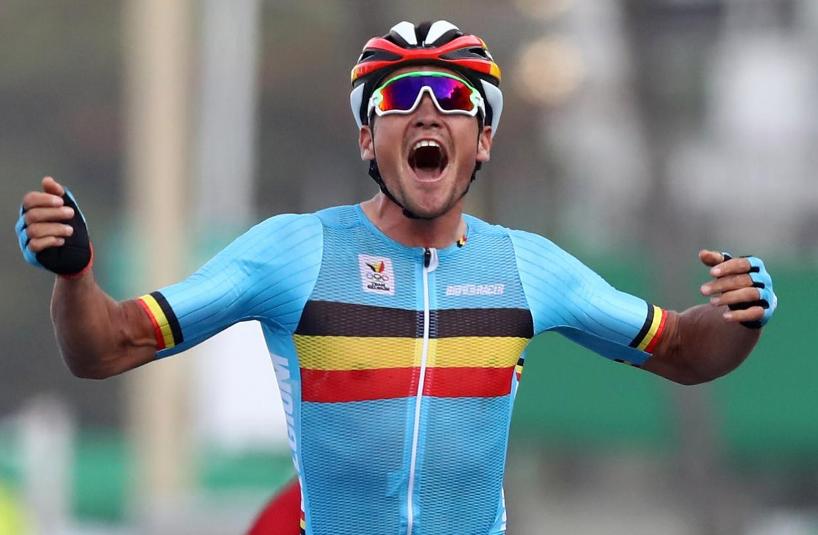 After winning a Tour de France stage last month and holding the yellow jersey for three days, the 31-year-old added Games glory to his achievements.

But it was a miserable day for some of the big favourites like Froome, who could only manage 12th, and Giro d’Italia champion Vincenzo Nibali, who crashed out 12km from the finish.

Spain’s Joaquim Rodriguez was sixth at 22sec, while his compatriot Alejandro Valverde could manage only 30th at almost 10min.

Van Avermaet and Jakob Fuglsang of Denmark caught runaway leader Rafal Majka of Poland with just 1.5km to the finish line at Copacabana beach, where security forces had earlier blown up a suspicious bag.

Majka was out in front 12km from the end, after breakaway companions Nibali and Sergio Henao crashed heavily on a fast descent.

But when Van Avermaet and Fuglsang caught Majka, the cramping Pole was unable to fight back and he did not even contest the sprint finish.

“When I saw the crash I was confused about how many riders were still up the road,” said the winner.

“I was working with Fuglsang, and we saw Majka. We knew it was possible. I knew I had to hang on.”

Nibali and Henao animated proceedings on the final climb and led as they went over the top 15km from the finish.

Majka was struggling to keep pace on the descent but when Nibali and Henao crashed, the Pole skilfully weaved through the debris and looked set for victory.

“I don’t know how I did not crash but somehow I made it through,” said Majka. “In the end I had such hard cramps in my legs I could barely pedal.”

That he had to settle for bronze was to the credit largely of Van Avermaet, a one-day cobbled classics specialist who was not expected to be able to keep up with smaller, lighter climbers on the final ascent.

A six-man breakaway got clear around 20km into the race with several big-hitters including former world champion Michal Kwiatkowski and Colombia’s Jarlinson Pantano.

Seventy kilometres from the finish a counter-attack was launched featuring Britain’s Geraint Thomas, Damiano Caruso of Italy and Van Avermaet.

With 200km ridden, Italian pair Nibali and Fabio Aru launched a joint attack on the penultimate descent and several riders caught the front five, leaving a group of 10 up top.

On the final ascent Nibali put in a burst with only Majka and Henao able to stick with him. But Nibali and Henao crashed, along with Thomas in the chase group.

That left Majka riding alone to the line, but he came up agonisingly short as Van Avermaet claimed his greatest victory.

“When the others caught me I knew that it was impossible to win,” said Majka, who was nonetheless delighted.

“To come here to win bronze makes me so happy. I cannot believe it.” – Agence France-Presse