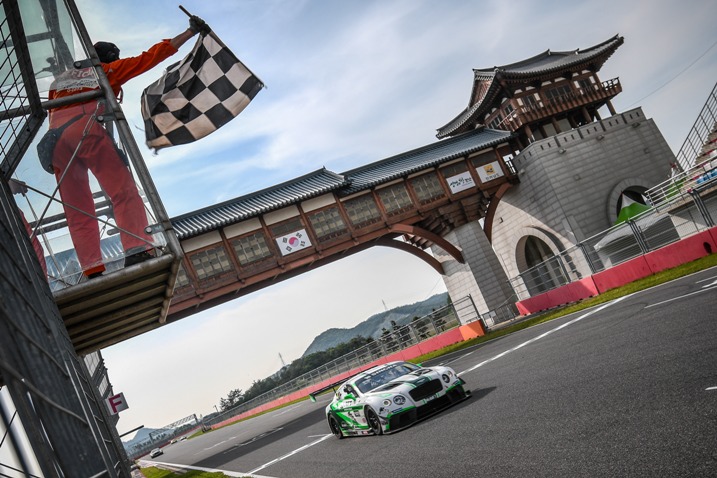 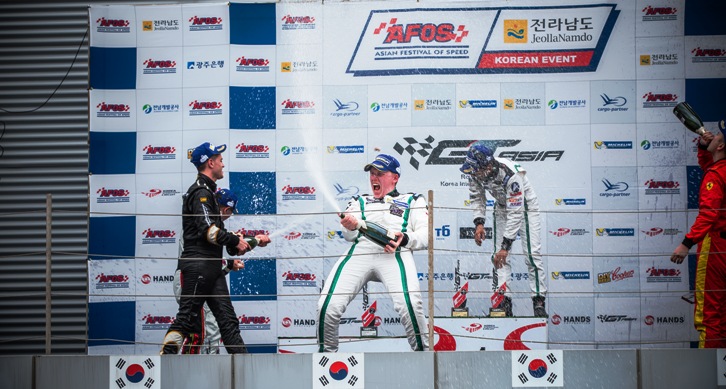 Jonathan Venter dominated the GT Asia Series season open on his debut with Bentley Team Absolute in Korea, taking the win in both races and mounting the perfect start to his drivers’ championship campaign. Starting race one from P3 after a strong qualifying session, Venter fought hard and kept the #8 Bentley within reach of the lead before handing over to his teammate who was able to capitalize and take the first win of the season.

Race two looked tough with a 24 second success penalty, but teammate Keita Sawa opened up a considerable gap during his first stint. Venter was able to build on this with impeccable driving and pull a 10s gap to take the second victory of the weekend.

It was Venter who would take to the track first in the #8 Bentley Continental GT3 to decide his race one starting position. The young Australian driver has a history of impressing in GT Asia qualifying and this session was no different. He was one of only three drivers to record a time under 2:07.00 and finished the 15 minute session in P3 with a 2:06.481, giving the #8 Bentley a strong chance of success for race one.

Venter was off to a strong start in P3 but had to drive wide to avoid an incident in the first corner, hampering his initial progress. He was able to recover quickly and take P4 before another incident unfolded in the coming laps, allowing him to move up the field once again. Now within striking distance of the lead, Venter focused on producing consistently quick laps to ensure that his teammate would have a shot at taking the top spot after their driver change. His hard work paid off as Sawa was able to overtake the lead Bentley early into his stint before opening up the gap and taking the chequered flag for the pair in P1.

“It is great to win the race today, it has been a massive relief from last year. It has been a very long road back from injury and to take the win today is a true testament to all the work the team has done for me. Sawa-san did an amazing stint after I handed over to him, we were lucky that the Lamborghini took out the Porsche, which gave me and Adderly Fong good room for the rest of our stint. We are going to have a tough time with the (success) penalty tomorrow but we have a fresh set of tyres in the bank, so hopefully we can stay consistent and get as many points as we can.”

Venter’s teammate, Sawa, started race two in P3 and stormed into the lead at the very first corner, where he began to gain an instant lead over the entire field. Sawa’s driving was textbook and as he dove into the pits at the halfway mark to change over to Venter, the #8 Bentley had a lead of over 12 seconds. After another flawless pit stop by the Bentley crew, Venter was back out in front and ready to make it two from two in Korea. Not content with just winning the race, the Australian continued to widen the gap in P1 and was turning laps at the same great pace as his teammate. On lap 21 though, Venter would set the fastest lap of the entire race as the hour long event entered the closing stages, proving that he was not just going to coast to the finish. In what was a faultless race, the #8 Bentley stormed home with Venter at the wheel and the final gap stretched to over 10 seconds. This ensured that both Venter and his teammate would be leaving Korea at the top of the drivers’ championship with the maximum 36 points.

“To get a double here at the GT Asia weekend with Bentley Team Absolute is a real honour. Driving with Sawa-san, he did a great job to get into P1 and pull a very good gap. We knew that with our 24 second pit stop (success) penalty it would be difficult to stay in the lead or even get a good positon but Sawa-san fortunately had some good pace and the other cars were locked in their own battles, which gave us some more room. To get the double is fantastic for the championship, I want to say thank you to entire team and Sawa-san, and I now have lots of confidence going into Buriram.”

“Obviously very happy with the result for Bentley Team Absolute, a double win during the first race weekend is an amazing feat. Jonathan drove two outstanding races, his pace was extremely fast and consistent and left many faces, including the Head of Bentley Motorsport, Brian Gush, very impressed! We at Bentley Team Absolute Racing could not be happier having this winning combination of Jonathan and Keita!”