Home 2021 Vintage win by Roglic in the Beaujolais 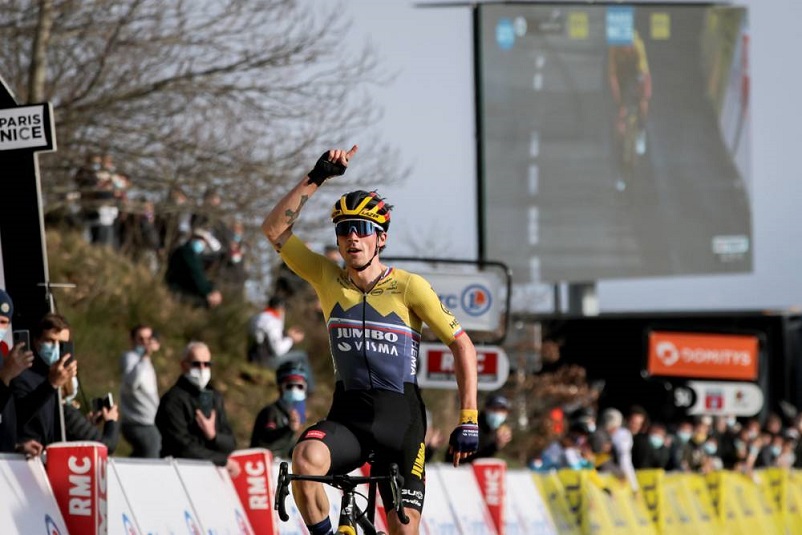 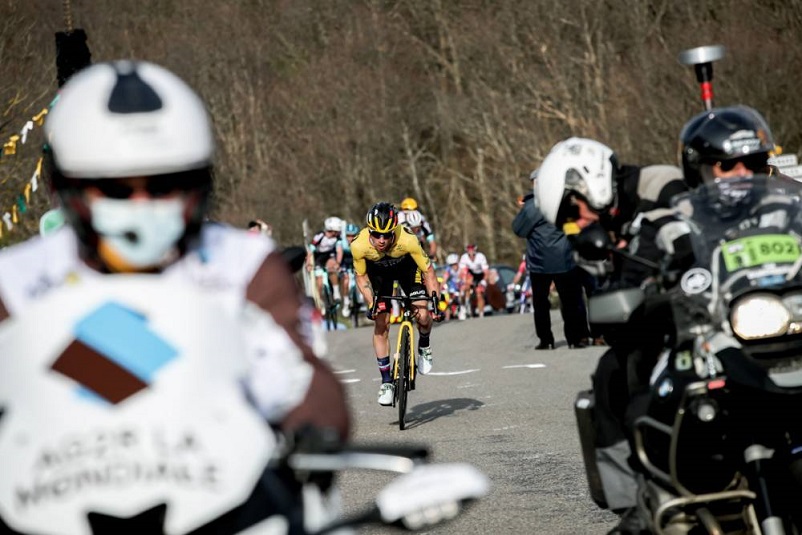 Primoz Roglic patiently waited for the finale of the winding 4th stage of Paris-Nice in the vineyards of the Beaujolais to surge and win his first stage on the Race to the Sun and take the yellow and white jersey away from Swiss Stefan Bissegger.

The Jumbo-Visma team leader attacked in the grueling final climb to Chiroubles, to cross the line with a 12 second lead over what was left of the bunch, led by title-holder Max Schachmann (Bora-Hansgrohe) and Frenchman Guillaume Martin Cofidis.

Six in the lead

They were quickly joined by Oliver Naesen (Ag2R-Citroen) and Oscar Riesebeek (Alpecin-Fenix). After seven kilometres, the lead of the six reached a minute. The gap increased steadily to reach 5:30 into the first climb of the day, Cote des Chevres (km 27.6).

Perez was first at the top, ahead of Bernard and Doubey. The result was exactly the same on Col de la Pistole (km 47.1), on Cote de Croix de Montmain (km 63.1) and on the Rock of Solutré (km 84.7) as Perez ousted Doubey from the top of the KOM classification.

The Frenchman stretched his lead on Mont Brouilly, shortly before Doubey, worn out by his efforts, was dropped by the leading group. With 50 km to go in Col de Durbize, as Casper Pedersen (DSM) surged from the bunch to chase behind the break, the peloton lost several riders. Race leader Stefan Bissegger was also seen struggling in the ascent and narrowly saved his scalp.

The five escapees only retained a minute’s lead as they tackled Mont Brouilly for the second time. The peloton sped up the hill and dropped yellow jersey holder Bissegger and the whole of the sprinters. As the pack was nearing, Bernard decided to go solo and parted with his breakaway companions to reach the top on his own.

In the descent, Tao Geoghegan Hart (Ineos Grenadiers) and David Gaudu (Groupama-FDJ) crashed and the Giro winner was definitely dropped by the main bunch while the Frenchman managed to make it back. As the peloton was catching the rest of the breakaway group, Remi Cavagna (Deceuninck-Quick Step), second overall, attacked in turn, quickly joined by 2009 Paris-Nice winner Luis Leon Sanchez (Astana).

Roglic on his own

In col de Durbize, Cavagna was forced to stop because of a mechanical and Sanchez caught Bernard with 5 km to go. The Frenchman was the first to crack and the Spanish champion was also caught when Primoz Roglic surged in the wheel of Pierre Latour and went on his own. With only the final ascent to Chiroubles left, the Slovenian increased his lead and showed he was a  class above the rest. – www.paris-nice.fr