Home 2019 Volkswagen ID.R and ID.3 at the Essen Motor Show 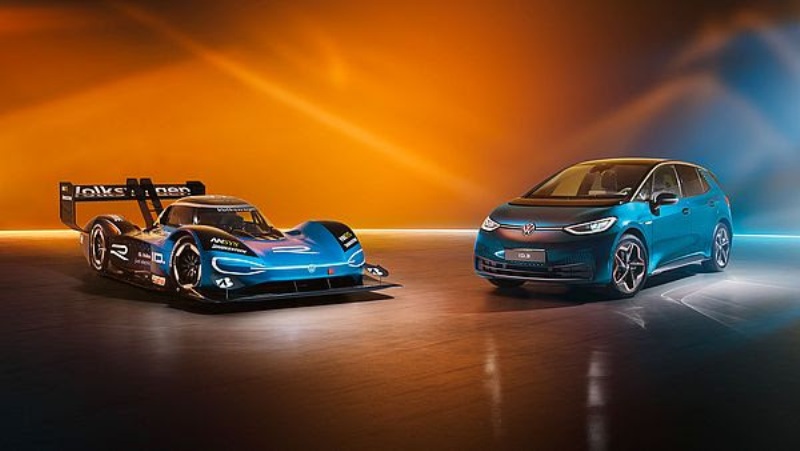 ID.R electric race car and the ID.31 large-scale production model are exhibited together

Record-breaking appearances of the ID.R e-race car provided know-how for the development of the ID. family.

Reciprocal knowledge and technology transfer between motorsport and series development

The ID.R electric racing car and the new ID.3 will meet at the Essen Motor Show (30 November to 08 December 2019). The prototype for the racetrack and the large-scale production model for road use will be presented to the public in Hall 3 of the largest tuning fair in Europe. At first glance, the two electro pioneers represent two vehicle concepts that could hardly be more different. However, the ID.R, which has been setting records around the world since 2018, and the Volkswagen ID.3, which was presented for the first time in September, share more than just the electric drivetrain. The development of the ID.R and its appearances have provided valuable information for the series development of the ID. family. At the same time, production development supported the Volkswagen Motorsport team with know-how gained during large-scale production.

The development of both models focused on a shared philosophy: maximising the efficiency of the electric drivetrain to ensure optimum usage of available energy – on the racetrack and on the road. The objective for the ID.R, a racing car that operates at the absolute limit, was peak performance on defined routes, while the ID.3 production module requires the most efficient usage of battery capacity in everyday operation and the ability to achieve the greatest range possible. To develop the batteries, Volkswagen Motorsport worked with the laboratories that are also involved in researching the technology for the ID. product family. The cells are integrated into the vehicle floor in the ID.R and in the ID.3 – producing a low centre of gravity that has a positive effect on handling properties. There are also parallels to be found in the charging strategy – for external charging with a rapid charging system and also during brake energy recovery (recuperation) while the vehicle is in motion. One shared feature, which is clear to everyone, are the aero rims on both cars. These have been optimised specifically to improve the cw value. The 20-inch alloy wheels on the ID.3 not only improve aerodynamic efficiency, but their flatness also fits perfectly into the new design language of the ID. family.

“The entire development of the ID.R led to reciprocal technology transfer between Volkswagen Motorsport and series development,” explains Dr. Frank Welsch, Chief Development Officer of Volkswagen Passenger Cars. “This primarily concerned the field of electric drive, as well as technologies such as lightweight design and high-efficiency aerodynamics. For example, motorsport benefited from the production development know-how in building battery cells and handling high-voltage components in the vehicle. On the other hand, the production developers watched how the motorsport team dealt with rapid charging technology and the strategy it used to optimise energy deployment and recuperation while driving.”

Volkswagen Motorsport Director Sven Smeets adds: “We are proud to have supported the development of the ID. production models with the development of the ID.R and its record-breaking appearances. The spectacular performances of the ID.R have also prompted a significant increase in the popularity of the new ID. family and shown that electric cars are not just environmentally friendly, but also fast and fascinating.”

1The vehicle is not yet on sale in Europe.