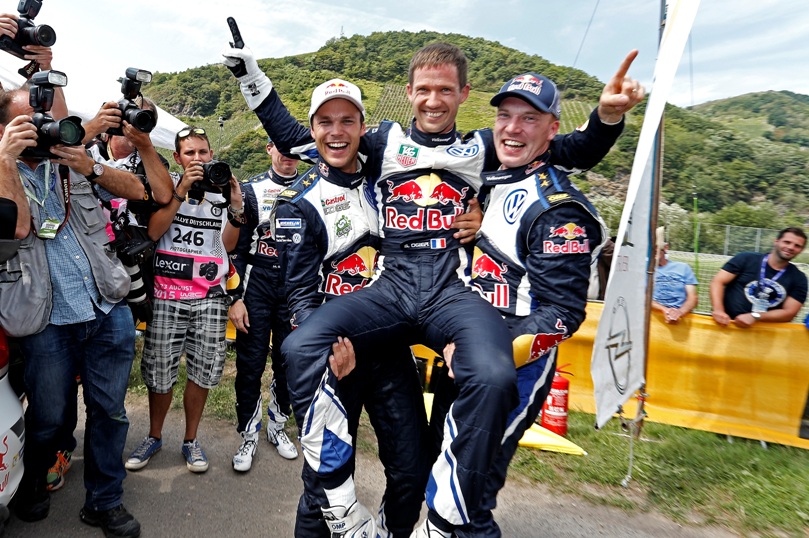 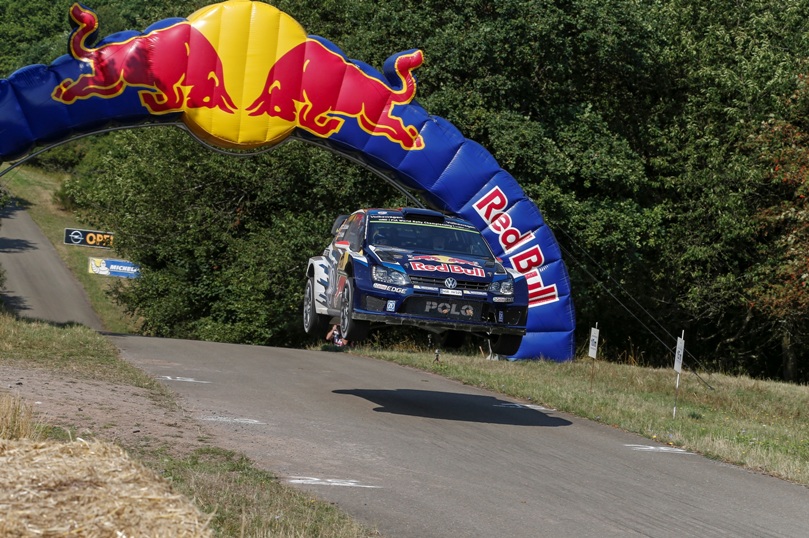 First WRC rally of the year on asphalt

Nothing but asphalt far and wide – Volkswagen is greatly looking forward to the home event in the FIA World Rally Championship (WRC). After the team from Wolfsburg made peace with the Rally Germany with a one-two-three result last year, and have established themselves in the ideal starting position as championship leaders in first, second and third place this season, the team is the favourite ahead of the ninth round of the season.

For Sébastien Ogier/Julien Ingrassia (F/F), Andreas Mikkelsen/Anders Jæger (N/N) and Jari-Matti Latvala/Miikka Anttila (FIN/FIN), who will all have to open the route, the starting disadvantage of the last six gravel rallies in a row is no longer an issue on asphalt. Depending on the weather conditions, the first starting positions could even be an advantage on this surface.

With the rallies in Germany, China and France, there are now three asphalt rounds in a row on the WRC calendar. In Germany, the participants will take on 18 special stages covering 306.80 kilometres against the clock – including the notorious “Panzerplatte” and the picturesque vineyard stages.

“After six rallies we won’t be fighting with a starting disadvantage – since we are on asphalt for the first time after gravel,” said Volkswagen Motorsport Director Jost Capito. “Then there is also the fact it is Volkswagen’s home event, the historic one-two-three result from last year and the championship positions one, two and three behind us – the conditions ahead of the Rally Germany are the best of the season so far. But we are also aware that our rivals Hyundai, Citroën and M-Sport-Ford are strong and that the Rally Germany is unpredictable and extremely demanding. Which is exactly why we are ready for the task.”

Made (it) in Germany: When Volkswagen made peace with the Rally Germany

Victory at the third attempt – and what a victory. After the Volkswagen team missed out on victory, in part dramatically, in 2013 and 2014, they achieved an acclaimed one-two-three result at the rally around Trier in 2015. Finally, the number 1 Polo R WRC of Sébastien Ogier finished in first place, ahead of his team-mate Jari-Matti Latvala and with Andreas Mikkelsen in third place. The result over the 21 special stages in total was just as impressive – with the exception of one stage, the three rally Polos won all of the special stages, including the Power Stage.

Three, two, one … “go”: Ogier, Mikkelsen and Latvala first to take to the track

As in 2015, Volkswagen will start the Rally Germany from the first three starting positions in 2016. The order is determined by the current positions in the championship standings up to and including the rally Saturday. Sébastien Ogier and Julien Ingrassia have continuously topped the overall standings since March 2014 and currently have 143 points – they will open the stages for the 31st time in a row. Their fiercest rivals are in the Volkswagen camp: Andreas Mikkelsen and Anders Jæger reduced the deficit to 45 points last time around. Third place is occupied by the third Volkswagen duo: Jari-Matti Latvala and Miikka Anttila, who moved up into third place in the championship after finishing second at the Rally Finland, and now have 87 points.

Three different rally worlds in three days – the Rally Germany is not only the first full asphalt event of the WRC year, it is also a real challenge for man and machine in terms of its characteristics. Fast stages through forests and open landscape, narrow, winding paths through vineyards and the highlight with the “Arena Panzerplatte” on the military training ground in Baumholder. Friday will be determined by the two stages “Mittelmosel” and “Moselland”, as well as the spectator stage “Ollmuth”. Saturday will be characterised by the stages on the “Panzerplatte” with three passes of the short spectator stage and two passes of the “Panzerplatte Lang” stage. Which makes it 90 kilometres against the clock on the military training ground in Baumholder alone, with its notorious “hinkelsteins”, which uncompromisingly border the track and have been responsible for the downfall of many cars suspension in the past. Sunday will be rounded off by the two special stages “Dhrontal” in the vineyards, and the closing Power Stage “Sauertal”.

Volkswagen’s 50th anniversary of motorsport action will be duly celebrated at the home event around Trier. The Formel V Europa e.V. association was formed on 11 July 1966, from which the present-day Volkswagen Motorsport GmbH stems. The spectators will not only be given a view of the history of the brand at the exhibition in the service park. There will also be demo rides in historic rally cars to celebrate the anniversary. Dieter Depping, test and development driver at Volkswagen, will lead the field in a replica of the Golf GTI 16 V, with which Kenneth Eriksson won Group A of the World Rally Championship in 1986, as the zero car. The same Dieter Depping, three-time German rally champion, with three wins at the Rally Germany (1994, 1996 and 1997) is the second most successful driver, after Sébastien Loeb (nine wins), in the history of the unique asphalt rally. However, with another win, Sébastien Ogier could draw level with him this year (currently two wins). 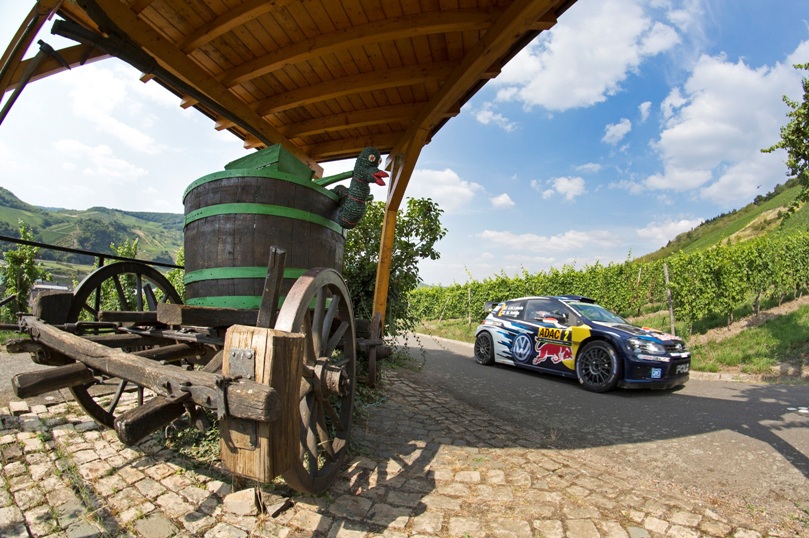 Quotes ahead of the Rally Germany

Sébastien Ogier, Volkswagen Polo R WRC #1
“I always look forward to the Rally Germany, but slightly more than usual this time around. Finally, Julien and I have a realistic chance of fighting for the win under our own steam again after the difficult gravel rallies. Accordingly, I am highly motivated and very keen to repeat the success of last year. The Rally Germany is also Volkswagen’s home event and so the whole team wants to deliver a particularly good performance in front of the fans. Testing in the run-up went really well. Making the change from gravel to asphalt was quick and without issue. We had a mix of sunshine and a few showers, so we were able to try out the various set-up version for the Polo R WRC – and Michelin’s new wet tyres. That could play a role since the stages are extremely tough in wet weather and errors are punished without mercy.”

Jari-Matti Latvala, Volkswagen Polo R WRC #2
“I used the free time ahead of the Rally Germany to test the current Polo and the Polo for the 2017 season. I also contested the historic rally in Finland with my Audi quattro, which is always a great deal of fun. Now I am ready for Germany. Sébastien was very strong last year, overall I was pleased with second place. Finishing in the top three again would be a good result for me this year. Last year I was a little bit too cautious on the Panzerplatte stages and lost a lot of time there. I want to improve on that this year. The Panzerplatte is a real toughie. There are seven different types of surface on that stage. From new concrete, through old, crumbly concrete, to very coarse concrete, and even asphalt, it really does have everything. You have to get used to these conditions first. It is also important to have a good feel for the car when braking on the Panzerplatte stages, since there are many junctions. It is also important to have a well-positioned car in the many fast passages. Only then do you feel confident and can really go on the attack.”

Andreas Mikkelsen, Volkswagen Polo R WRC #9
“I’m really looking forward to the Rally Germany, which is always a great challenge. The weather is extremely changeable and the grip level constantly changes on the different asphalt surfaces, which means the set-up needs to be adjusted frequently. This is extremely tough on the drivers and co-drivers, but also the mechanics and engineers in Germany. Compared with last year, there are a few new special stages that I am very excited for. I am particularly looking forward to ‘Panzerplatte’. This stage is always a highlight. In the championship, we have consistently reduced the deficit to Sébastien Ogier in the previous rallies and of course it would be great if we were able to do that again this time. But it won’t be easy since Seb has always been extremely fast in Germany in recent years. It is Volkswagen’s home event so the rally is something very special, but that doesn’t really change our preparations. We finished in the top three positions last year. It will no doubt be difficult to repeat that, but we will try.”

Did you know that …

… Volkswagen has clocked up four podium results at the Rally Germany? In addition to the one-two-three result of Ogier/Ingrassia, Latvala/Anttila and Mikkelsen/Fløene in 2015, Mikkelsen/Fløene finished third and secured another podium place for Volkswagen in 2014. Incidentally: Volkswagen were in the clear lead for much of the race each time they started.

… the start and finish podium in Trier will be at the Porta Nigra in front of thousands of spectators? The oldest city in Germany with its trade fair grounds is also the mainstay of the ninth round of the WRC season.

… 3000 volunteers help out at the Rally Germany?

… this year is the 34th edition of the Rally Germany? It is the rally’s 14th time as part of the World Rally Championship.

… Volkswagen appeared on the list of winners for the first time in 1987? Back then with a Golf GTI 16V with Jochi Kleint/Manfred Hiemer at the wheel.