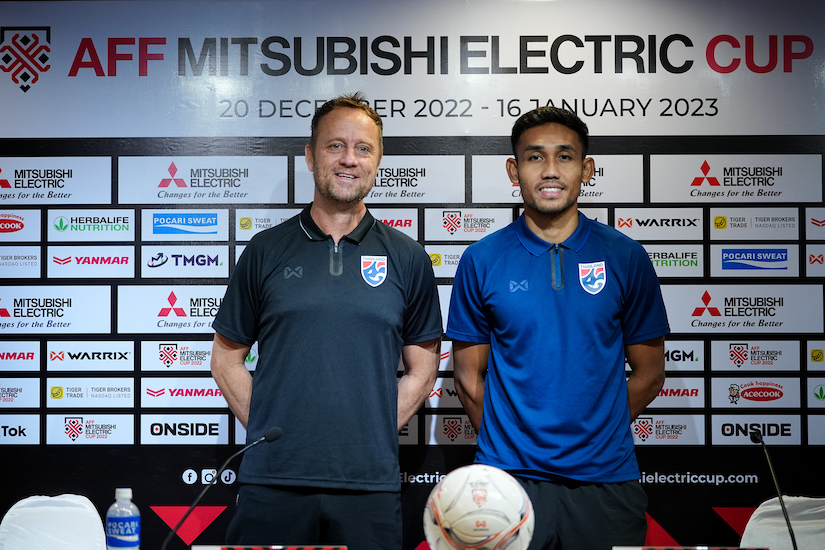 Teerasil Dangda, the all-time top scorer of the AFF Mitsubishi Cup, is not thinking further than just to win the three points when they play the Philippines tomorrow night at the Thammasat Stadium.

After picking up the full points in their first game away to Brunei Darussalam a few days ago, defending champions Thailand will be out to make sure that they continue their winning run.

“We are fully focussed on our first game at home. We are just out to win the three points,” said the 34-year-old Teerasil, who has set a record of scoring 20 goals at the biennial championship after making his debut in 2008.

“The Philippines team has made a lot of changes to their squad but we are looking forward to a successful game tomorrow.”

In the meantime, Teerasil’s opposite from the Philippines Kenshiro Daniels said that his team is all pumped up for the match against Thailand.

He said after the loss to Cambodia in their opening tie, the team has regrouped to pick up their first win against Brunei DS.

“There’s great energy in the team and we have prepared very well for the game against Thailand,” he added.

“I think we just want to keep our heads down and go into the game against Thailand well.”

Thus far, Kenshiro has scored three goals in the two matches he played – scoring twice against Cambodia and then once against Brunei DS.