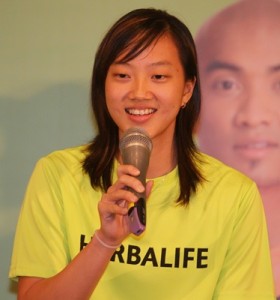 Low Wee Wern got her wish to win in straight games.

MALAYSIAN No. 2 Low Wee Wern got off to a good start in the first round of the Women’s World Championship by defeating Donna Urquhart of Australia.

The Penangite was given a tough fight in the first game before finishing off her opponent, 11-7, 11-6 and 11-8 at the Subterranean Penang International Convention and Exhibition Centre (SPICE) here.

“Having Donna in the first round is not easy as she is a tough competitor. We had hard matches before and she has defeated me a couple of times,” Wee Wern told Bernama.

“It doesn’t look like a very hard match because we had very close points and I’m quite happy the way I played.

“I wanted to win 3-0 and try to keep myself as fresh as I can for the rest of the week.”

Wee Wern is scheduled to meet unseeded Samantha Cornett of Canada who beat 16th seed Line Hansen of Denmark 11-5, 11-7 and 11-7.

“It’s still a very long way to the final, I’ve one big match tomorrow, if I pull through in that, I have to face Laura Massaro and she will be my biggest challenge,” said Wee Wern.