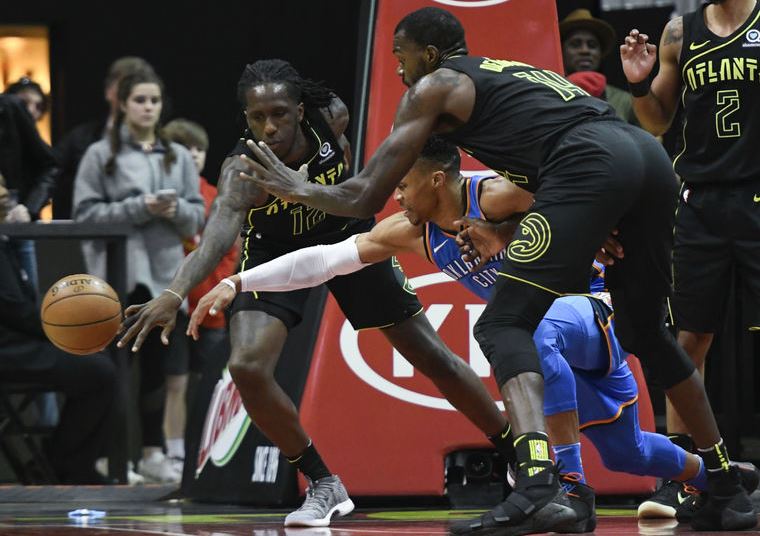 Russell Westbrook snared the 100th triple-double of his career on Tuesday as the Oklahoma City Thunder closed in on a playoff berth with a 119-107 defeat of the Atlanta Hawks.

Westbrook finished with 32 points, 12 rebounds and 12 assists to become only the fourth player in NBA history to record a century of triples.

The 29-year-old Thunder star joins Oscar Robertson (181), Magic Johnson (138) and Jason Kidd (107) as the latest member of the exclusive club of triple-double centurions.

“It’s a blessing man, I give all thanks to the man above for the ability to play basketball,” Westbrook said afterwards when asked about his milestone.

“I’m just thankful to be able to do it here in Oklahoma City with my team-mates, happy to be able to accomplish something like that,” he added.

Westbrook led the scoring on Tuesday, with Carmelo Anthony adding 21 points and Jerami Grant contributing 20 off the bench as the Thunder improved to 41-29.

Oklahoma City are fourth in the Western Conference standings, two wins ahead of the fifth-placed New Orleans Pelicans.

Although not mathematically certain of a place in the postseason, only a major collapse is likely to deny the Thunder a playoff berth.

Elsewhere on Tuesday, the San Antonio Spurs bounced back from Monday’s mauling at the hands of Houston with a 108-72 blowout over the Orlando Magic.

LaMarcus Aldridge returned to the starting line-up for San Antonio and duly delivered with 24 points. Aldridge was one of six Spurs to make double figures, helping the franchise improve to 38-30 for the season.

San Antonio, who are awaiting the return of Kawhi Leonard from injury, are battling to avoid failing to reach the playoffs for the first time since 1996-1997.

Two of the Spurs veterans, Tony Parker and Pau Gasol, both rallied to the cause on Tuesday with 10 and 11 points off the bench.

“The defense really set the tone,” Popovich told reporters. “People guarded their men and took pride in it and the rest of the team followed through. It kind of fuelled the offense a little bit.”

Popovich believes the Spurs defense could ultimately define the remainder of their season.

“We’re not going to score on some nights so the defense has to sustain us,” he said.

In the Eastern Conference, meanwhile, leaders Toronto were forced to dig themselves out of a hole before recovering to seal a ninth straight win in their 116-102 defeat of the Brooklyn Nets.

Jonas Valanciunas led the Raptors’ rearguard action with 26 points and 14 rebounds, helping Toronto recover from a 74-59 deficit early in the second half to claim a win which saw them seal their 50th win of the season.

DeMar DeRozan and Fred VanVleet scored 15 points each while Kyle Lowry had a relatively quiet night with 11 points and 11 assists.

D’Angelo Russell led the scoring for the Nets with 32 points with Rondae Hollis-Jefferson adding 19 from the bench. – Agence France-Presse