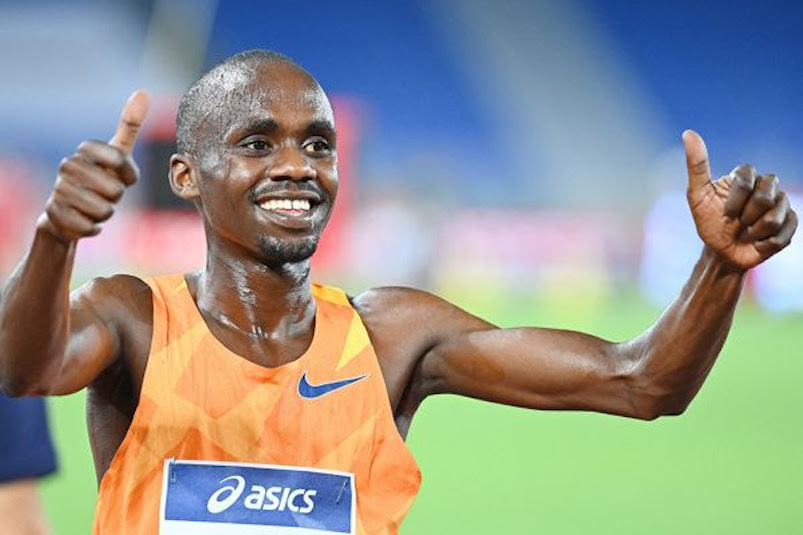 Already one of a select number of athletes to have won global medals on the track, cross country and road, Jacob Kiplimo took another step up in class on Sunday (21) when the Ugandan became a world record-holder with his 57:31* victory at the EDP Lisbon Half Marathon.

Just one week after turning 21, Kiplimo dominated the race in the Portuguese capital, dropping his opponents within the first three kilometres. He passed through 5km in 13:40 and 10km in 27:05, putting himself well inside world record schedule.

After a swift 40:27 split at 15km, Kiplimo’s pace dropped slightly in the final few kilometres, but he just about managed to stay inside world record pace as he crossed the line in 57:31, taking one second off the record set by his arch rival Kibiwott Kandie in Valencia last year.

“With one kilometre to go, I knew that I was going to break the world record,” said Kiplimo, who won by more than two minutes. “When I was on the final straight and saw the clock, I gave it all I had and told myself I had to sprint fast to reach the finish line.”

The road to the top of the world started in Kween, a rural district in the east of Uganda, close to the Kenyan border.

There, at an altitude of about 1900m (6200ft), Jacob Kiplimo would run five kilometres to and from school each day. As a child, he was building an aerobic engine that would eventually allow him to outrun the world’s best.

Kiplimo’s family were maize farmers, and his entry to competitive running came about through his older brothers, four of whom were athletes. Growing up, Kiplimo would watch them head out the door every morning to train. “To my mind, I said: ‘I want to be like them’,” he says.

His first proper race was in 2015, a selection trial in Uganda ahead of the World Mountain Running Championships. Kiplimo won it, but his federation told him he was too young to compete internationally. In December that year he moved to Tuscany in Italy to work under a new coach, Giuseppe Giambrone.

The following year he won bronze over 10,000m at the World U20 Championships in Bydgoszcz, clocking 27:26.68, and he then competed at the Rio Olympics over 5000m. In 2017 the World Cross Country Championships were on home turf in Kampala, and Kiplimo became a hero to the thousands thronging the course when winning gold in the U20 race.

“The president was there and when (foreign athletes) come and take your medals it’s not okay, it looks bad,” he says. “It was fantastic to win on home soil.”

After that he came to a crossroads. Kiplimo wanted to remain in Uganda but his coach wanted him based in Italy. In the end Kiplimo chose Uganda, and he has trained primarily in Kapchorwa over the past few years.

That’s also where Joshua Cheptegei is based, and while Kiplimo joins in with him from time to time, most of his work is done with a different group. Through 2018 and 2019 he followed either his own plan or that of the locals in Kapchorwa, but since the start of 2020 he has been coached by Italian Iacopo Brasi.

Kiplimo appeared set to hit the big time after the 2019 World Cross Country Championships in Aarhus, where he won silver just four seconds behind Cheptegei, but his track season was ended before it began.

In May he developed a pain beneath his knee that ruled him out for four months, and he was forced to watch from afar as Cheptegei took 10,000m gold at the World Championships in Doha. The mental toll of the injury was as tough to deal with as the physical pain.

He managed to get back into good form before the end of the year and in December he went to Brazil for the Sao Silvestre 15km road race on New Year’s Eve. It proved an embarrassing outing for Kiplimo, who had victory in his hands approaching the line but failed to hear the footsteps of Kenya’s Kibiwott Kandie, who crept past just as Kiplimo was raising his arms in celebration.

Kiplimo would avenge that defeat later in 2020, but not before a brief but successful track season, during which he set a meeting record over 5000m in Ostrava (12:48.63) and set a national 3000m record of 7:26.64 to win at the Wanda Diamond League meeting in Rome.

One month after his triumph in the Italian capital, Kiplimo headed to Poland for the World Athletics Half Marathon Championships Gdynia 2020. He had done just two weeks of specific training for it, but his training was going so well, he knew he had a shot of a medal.

In a high-quality and competitive race, Kiplimo struck gold in a championship record of 58:49, this time holding off Kandie in the closing stages with Cheptegei having drifted back earlier in the race.

Kandie got the upper hand in Valencia later that year as the Kenyan broke the world half marathon record with 57:32. Kiplimo finished a close second in 57:37, the second-fastest time in history and well inside the previous world record.

Having been in contention for most of the 10,000m final in Tokyo, Kiplimo eventually took bronze after being outsprinted in the closing stages by eventual winner Selemon Barega and Cheptegei. He returned to the track for the 5000m and reached the final, where he placed fifth.

Kiplimo gave himself time to recover from the track season before turning his attention back to the roads. And given his 57:31 world record in Lisbon – breaking the mark set by his arch rival Kandie – the approach clearly worked.

* subject to the usual ratification procedure