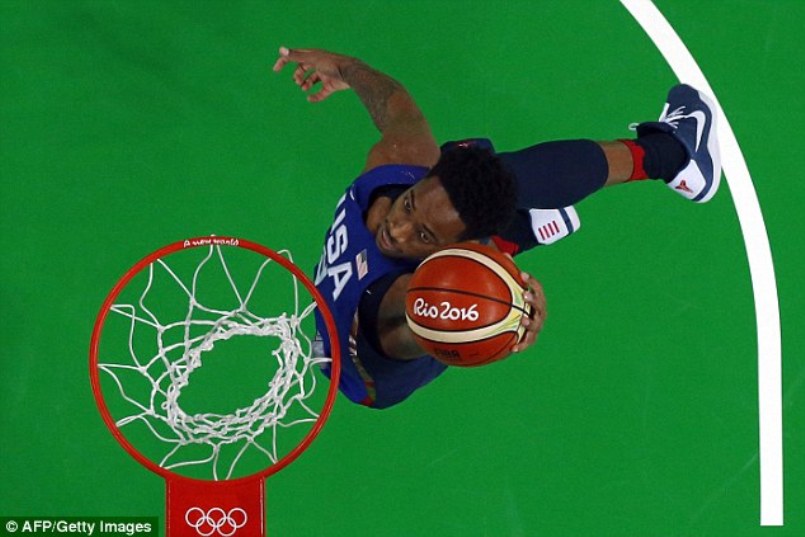 Kevin Durant scored 18 of his 30 points in the second quarter to trigger the rout, stretching the USA’s Olympic winning streak to 25 games and its decade-long unbeaten string to 76 in what was the final gold medal match of the Games.

He was on the 2004 team that settled for bronze, a result that sparked a re-organisation of the USA programmed that has gone unbeaten in the Games since.

“I know this is the end. This is it for me. I committed to this in ’04. I’ve seen the worst and I’ve seen the best. I’m here today three gold medals later.”

It was the USA’s 15th overall men’s basketball gold medal since the sport was first added to the Olympic line-up in 1936.

It was also the farewell game for US coach Mike Krzyzewski, who will be replaced by San Antonio Spurs coach Gregg Popovich.

A Serbian team that tested the US squad before falling 94-91 in a group stage game — the closest call yet in the Americans’ long Olympic win streak — stayed close for barely a quarter before the NBA playmakers went wild.

Serbia led 14-11 with 3:12 remaining in the first quarter when the Americans, who opened the game shooting only 5-of-17 from the floor, began a 32-8 run to break it open.

Durant, who joins the NBA Western Conference champion Golden State Warriors next season, had 14 points in the pivotal spurt including a spectacular steal and fast-break slam dunk.

Although it went unbeaten, the USA was played a little too close for comfort in most of its Rio Games.

That raised doubts about the ability of the newly assembled team to play as a unit and handle the perpetual motion of international play.

Anthony and Durant were the only players to return from 2012.

“It was the best thing that happened for us,” centre DeMarcus Cousins said of those wake-up calls.

“It let us know that we had to take it to another level because it’s not going to be a walk in the park. If anything, I think that was the best thing for us.”

Cousins had 13 points and 15 rebounds in the game.

The first half ended with the Americans ahead 52-29 and playing like the confident, flamboyant side most expected to see once the roster was named.

“We’re a confident group. We corrected our mistakes and came together as a team. Winning’s not always easy,” Cousins said.

In the second half, it was only a matter of settling the final margin and adding to the USA highlight reel.

Durant and Anthony hugged late in the fourth quarter with the result long decided, and after the final buzzer, the Americans were dancing at mid-court in celebration.

Spain, which lost to the US team in the past two Olympic finals, edged Australia 89-88 in the bronze medal game. – Agence France-Presse