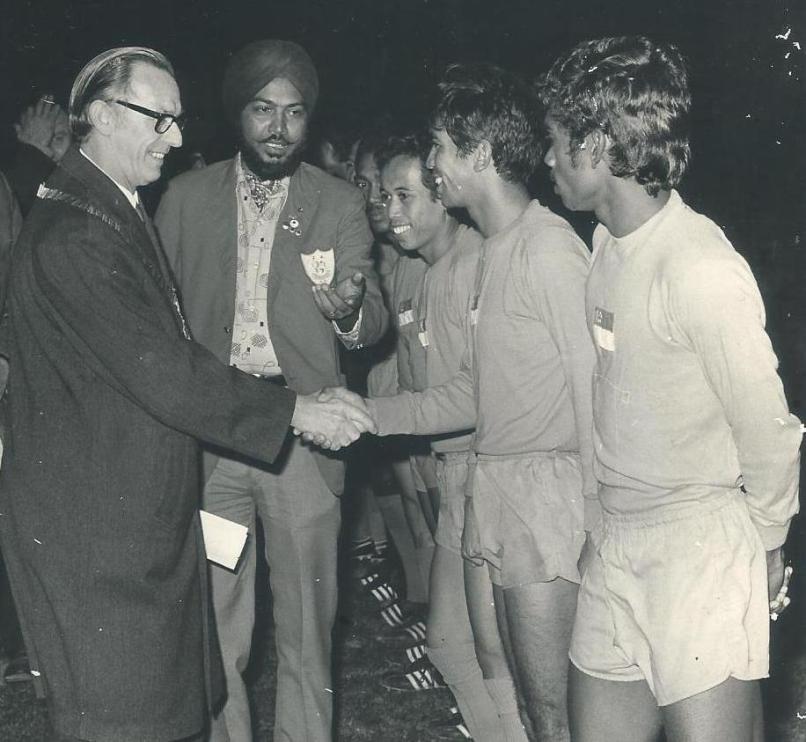 IT’S 44 years since Singapore’s first and only football tour to the ‘Land of Football’ and here I bring you, for the first time, sentimental memories, on and off the field, seldom ever reported in the newspapers.

What suddenly sparked interest in the 1972 tour was an antiquated team lineup of an April 17 1972 friendly match between the Lions and Dagenham (a large suburb of east London) from (celebrity author) Neil Humphreys, which brought back a flood of memories of the fortnight-long England tour.

Then in 1972, the Malaysian ‘Harimaus’ were on Cloud Nine, too, as the M. Chandran-skippered team qualified for the Munich Olympic Games – first time an Asean team ever made it to Olympics and the history books show it was the best football team.

For the record, Chin Aun is the only footballer to have the distinction of representing Malaysia in both the 1972 and 1980 Olympic football teams.

Back to the Singapore Lions’ story: Award-winning Malaysia Cup coach Jita Singh was then 23 years, a regular soldier with the Singapore Armed Forces (SAF), and one of the older players. The tour team had in their ranks legendary players like Eric Paine, (the late) Dollah Kassim, Samad Allapitchay, S, Rajagopal, M. Kumar, Lim Tien Jit and Roy Krishnan.

“I played as a fullback for Singapore from 1968 to end of 1972 and then went on to coaching and refereeing after my playing career,” recalls Jita. “The two-week England tour was an once-in-a-lifetime experience and we were guests of Arsenal and Chelsea, then the leading Premiership clubs.”

The 20 touring Singapore players, including Lim Chiew Peng, Quah Kim Lye, Mohd Ali, Othman Baharom, S. Muthiah, Jaffar Yacob and (the late) Abu Sujak, did “home stay”, where they bunked with British families instead of staying in five-star hotels as the present-day Lions usually do, on overseas trips.

Another phrase for homestay is ‘host family’, says Jita. The two phrases mean the same thing and can be used interchangeably.

“Eric (Paine) and I stayed with a family in East Croydon and this ‘home stay’ experience was like a culture shock as most of the players came from simple kampong llifestyles or humble HDB homes and now got the chance to relish the British lifestyle,” he says.

“So experiencing the British way of life, from fresh breakfast smoothies in the morning, was a super differing experience with the adopted parents, who sincerely cared for us like their own children.”

The tour was arranged by the National Sports Promotion Board (NSPB) and led by manager Naranjan Singh and coach Sebastian Yap. Singapore fans followed daily media accounts, courtesy of two newspaper journalists, Joe Dorai (The Straits Times) and Jeffrey Low (The New Nation), who reported on football for three decades from the mid-1960s.

Some of the players recounted this extraordinary eye-witness account on how the two top sports-writers allegedly fought in the train to Aldgate, a weekend market.

A player, who asked not to be named, said: “They quarreled and later exchanged blows in the train. We were shocked at two journalists fighting and we wondered if either of them would ever write about the incident in the newspaper. It apparently never happened, maybe they made a deal as they were home-stay room-mates!”

But Jeffrey Low, recognised then as the “Voice of Football”, made big headlines when he reported in the afternoon tabloid, The New Nation, widely recognised as the “football newspaper”, about the outrageous behaviour of England striker Charlie George to the Singapore team.

Then Charlie, at 22 years, was an Arsenal pop-star-like icon, Highbury’s favourite son, with his long-flowing hair and rather cocky in his behaviour. He lacked discipline and focus. To most football fans who saw him play, he was a flawed genius, a terrace chant.

Charlie was apparently annoyed at seeing the Singapore footballers at the Arsenal training ground. He allegedly shouted in a loud voice: “Go, take them away, get them lost in the woods!”

Jita remembers that the Arsenal “Double” represented the crowning glory in the impressive managerial career of manager Bertie Mee, a physiotherapist turned manager, who led the Gunners to their historic League and FA Cup triumphs.

“He was a highly respected icon and when Naranjan Singh (Singapore manager) introduced Sebastian Yap (Singapore coach) to Bertie and said he’s our coach and also a FIFA-qualified coach, Bertie remarked: ‘Then what is your team doing here?’”

Getting whipped by a mounted police horse’s tail was another funny off-the-field episode.

(The late) Abu Sujak and Jita were outside Wembley, for the England versus Germany match, with a rip-roaring crowd in attendance.  The horses were deployed in potentially troublesome crowd-control because of their mobile mass and height advantage and also increasingly for crime prevention and high visibility policing roles.

Jita recounts: “The horses were huge and standing very close to one another. Abu and I found a little gap and tried to squeeze through, near the tail-end. But the horses had braided tails, with big beads, and when their tails are swung, it gave a whipping lash. Abu got slapped in the face, a hard knock and took him a while to recover from the unexpected blow!”

The “home stay” concept had its pros and cons. Jita remembers, some of the “adopted parents” were generous and even taking some footballers for an evening drink.

And when two players, whose names cannot be revealed, had more drinks, before the evening training session and were not capable of playing because of excessive consumption, their guardians would call the Singapore team officials and say: “Sorry, my two ‘sons’ are sick this evening and unable to attend training!”

The British weather, inundated with cold rain, took its toll on the players over two weeks. Weather, in meteorological terms, refers to the daily elements like temperature, wind and rain. And in Britain, says Jita, they can all change hour by hour and day by day. The unique weather is all down to the fact it is an island and where it’s positioned on the planet, between the Atlantic Ocean and a large land mass, continental Europe.

“There is a lot going on meteorologically where we are and it’s this diversity and changeability that makes British weather so distinct,” he says. “It was a challenging experience but at Watford, we faced a hailstorm of ice-cubes, which was very unusual. Hailstones in summer seem very strange. How can ice, falling from the sky, occur in April? What is happening to the weather, we wondered.”

Layered clothing was also the trick of surviving the ultra-cold British weather, says Jita, who wore three layers and then the football jersey. He clarifies: “The multiple clothes creates insulation and traps the heat inside the body. While a thick sweater can warm you up initially, but later on when the air passes through it, you will start feeling cold again.

“We were advised to layer the clothes which provided more insulation. The top outer layer should be weather proof think wind breaker and water proof. The second layer in should be wool from the top, is it is a good insulation and the fibers should be close together. The more pocket of air you have the more insulation you have, thus the warmer you are.”

Jita praised the idea of not staying in hotels, as it not only cut the overall tour budget significantly but introduced the players to a new-found British culture, right from morning breakfast without the Singaporean roti pratas, carrot cakes, congees, nasi lemaks or thosais.

He explains: “A good homestay family is crucial, especially for new Singaporean teenagers going abroad, in terms of encouraging them to speak English, introducing them to a different culture and giving them a ‘family’ in Britain.

“At first, there was a bit of a culture shock but most of our homestay families, we were introduced to, turned out to be life-long friends and this is a special friendship-culture that must ;l90be encouraged in the longer-term.”

Oh yes, the ketchup bottle tale: Jita says that almost all the players kept their special ketchup (tomato or chilly) bottles and sneaked them wherever they went in order to get that tomatoey or chilly goodness on to the plate.

“We’re so used to rice, which is not on the regular British family menu,” says Jita. “We want our Asian food to taste stronger and hotter, so the only way was to sneak in the ‘hot’ ketchup bottle to get the real spicy Asian flavour in our food.”

After his playing career, Jita was motivated to become the first Sikh national coach from 1979 to 1984. He was the youngest national team coach when he led Singapore at age 29 and in his first assignment, he guided the Lions to victory in the 1980 Malaysia Cup, as well as two South-East Asian (SEA) Games silver medals (1983 and 1989).

Former Football Association of Singapore (FAS) Chairman Nadesan Ganesan hailed Jita as the “Man with the Midas touch”. The Singapore National Olympic Council (SNOC) decorated him with the “Coach of the Year” award in 1981, his highest national decoration to date.

Jita later went on to be a FIFA Coaching Instructor, served at the AFC headquarters in Kuala Lumpur, returning later to oversee grassroots development at the FAS. He joined the FAS in 2007 as Head of Grassroots Development and spent the next seven years devoting his time and efforts to enhance the youth development structure in Singapore.

He went to Malaysia in 2014 to be Academy Director at the Pahang-based Frenz United Football Academy (FUFA), an ambitious centre to groom the next generation of Malaysian players.

Now back on home ground, since middle September, Jita starts in a refreshing new role in early November as Director of Football Excellence at five-time S-League champion Tampines Rovers.

He significantly sums up the English fortnight in 1972 as an “unbelievable players’ experience”.

“We were amateurs and just got on probably like ‘frogs in the well’ without much big-time international exposure out of the country, let alone Asean or a bit of Asia,” he says. “Getting the chance to go to the ‘Land of Football’, spending two weeks with Arsenal and Chelsea and playing about nine matches with the top amateur clubs was a rousing learning experience.”

“It’s the first time we went to England and I can’t remember, even 44 years later, another national team spending two weeks there. I believe every player will look at it as a dream-come-true, to spend time in England, when football was at a real high in 1972 after England won the World Cup in 1966.”

For Malaysia, too, 1972, is a 44-years-old record-of-a-memory that must never to be forgotten. I wish to reiterate that the Singapore and Malaysia players of the 1960s and 1970s truly sacrificed for the love of the game and loyalty to the country. They did not earn fat salaries or allowances. Their pride and loyalty came from donning the national team jersey.

It was what every footballer in that era craved for and their dedication, determination and discipline must not be too easily forgotten.