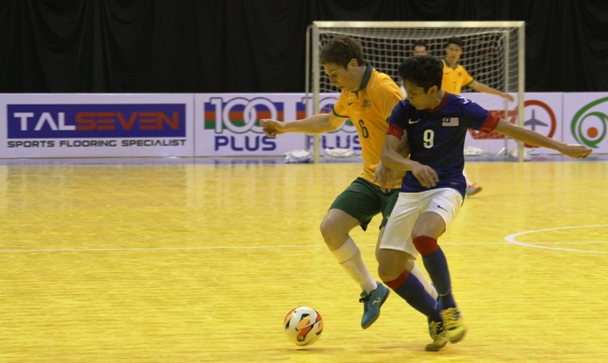 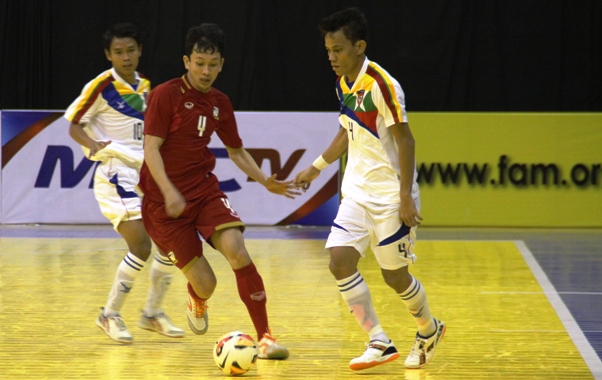 Thailand and Australia qualified for the semifinals of the AFF Futsal Championship when they won their matches against Myanmar and Malaysia respectively this evening. Thailand survived a late Myanmar charge to win 5-4 while Australia walked away with a 3-0 over Malaysia.

The Thais and Aussies have nine points each from three matches and have advanced to the semis with a game to spare.Tomorrow’s matches will determine the final positions in the group and will decide the semifinal match-ups. Australia will face Indonesia in their last Group A tietomorrow while Thailand will face Vietnam to decide the Group B winner.

Thailand, in today’s match, grabbed a three-goal lead at the break through Asming Talek (3rd), Wanlop Pansomsua (9th) and Atirat Sittisak (13th). The Thais added another in the 31st minute through Jetsada Chudech.

Myanmar then came back strongly and within a space of seven minutes, knocked in three goals from Pyae Phyo Maung-3 (31st), Aung Aung (32nd) and Kawin Wiboonratchakit (o.g. 37th) to put the score at 4-3.  But before they could tie the score, Thailand sneaked in a fifth goal through Jetsada.  Myanmar never gave up but only managed to produce one more in the 40thminute

In the second match tonight, the Malaysian players did well to limit the number of goals their opponents scored. Australia managed to find the net twice in the first half, through Nathan Edmund Niski in the sixth minute and Gregory James Giovenali in the 18th minute.

Despite trying their best, the Aussies only managed one more goal in the second half through Daniel Steven Fogarty during powerplay.

“We played much better than we did when compared to the loss against Indonesia,”‘ said Malaysian coach Maizal Hairi Marzuki. “The two goals disrupted our concentration. We created a lot of chances to score but we just could not find the right finish.”