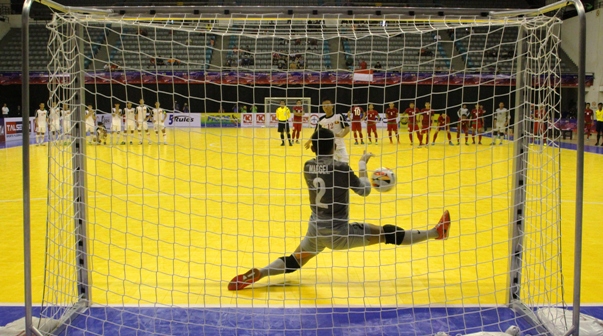 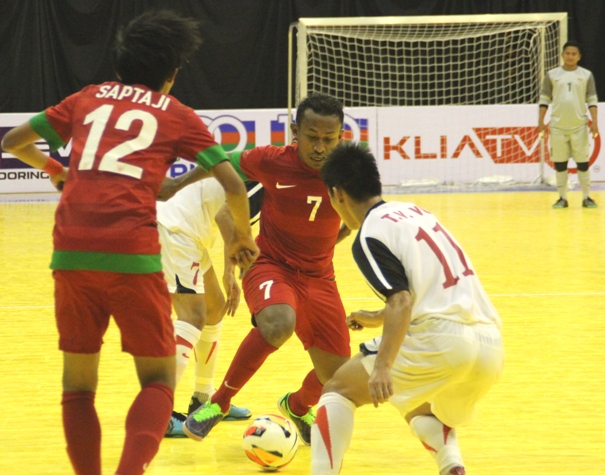 Vietnam dominated the penalty shootout to defeat Indonesia in the third-fourth placing playoff match of the AFF Futsal Championship at the Malawati Stadium today. The match had to be decided with penalties after both teams were tied at 2-2 in regulation time. Vietnam went on to win the shootout 3-1.

The Vietnamese grabbed a two-goal lead but Indonesia charged back with two quick strikes in the second half to force the match into the shootout.

Indonesia could have taken the lead in the eighth minute but Ardy Dwi Suwardy blasted into the post. His follow up shot into the side-netting. Ardy would later regret his miss shots  just two minutes later. Le Quoc Nam moved in and neatly turned in a freekick from Tran Van Vu to put as Vietnam ahead.

Vietnam were celebrating again in the 14th minute when the skillful Van Vu slipped his shot through to give his team a two-goal lead at the break.

Indonesia worked hard at trying to get through but all their efforts were off target. But then in a space of two minutes, in the 31st and 32nd minutes, Indonesia stunned their opponents with goals from Jaelani Ladjanibi and skipper Caisar Octavianus to put the score at 2-2.

With eight minutes to go. Vietnam and Indonesia threw everything they had into the game but when time finally ran out, the score remained unchanged.

In the shootout, Indonesia missed their opening kick which paved the way for Vietnam to wrest the bronze. Van Vu, Nguyen Bao Quan and Pham Duc Hoa, were all on target to ensure a consolation victory for Vietnam.