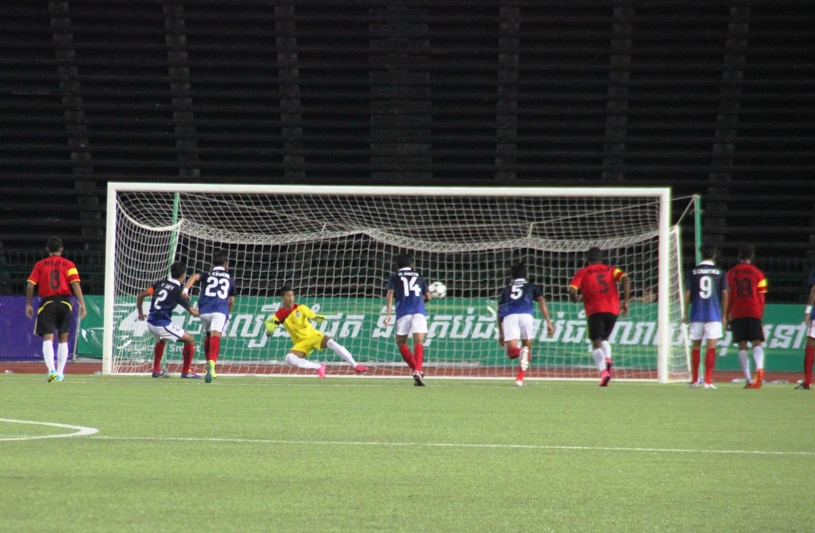 A comprehensive 3-0 victory over Timor Leste in their final game in Group B this evening gave Cambodia their place in the semi-finals of the AFF Smart Under-16 Championship 2016.

In the match that was played at the National Olympic Stadium, a brace from Mao Piseth in the second half to add to the converted penalty from the first steered Cambodia to the final four as they picked up nine points from four matches to emerge as the runners-up from the group.

“It was not an easy match for sure as the burden of expectations was there,” said Cambodian coach Inoue Kazunori after the match.

“But the boys delivered what was expected, so now we will have to prepare well to take on Vietnam next.”

With the support from the stand numbering just under 15,000, the Cambodian lads were full of enthusiasm as they pushed forward in number and pressed right from the start.

But as the offensive play came in hard and heavy, a handball just seven minutes in would turn the pace and face of the game as Cambodia wrested the upper hand and Timor having to withstand the enormous pressure.

Captain Yue Safy sent Timor keeper Natalino Soares the wrong way as the crowd broke into rapturous delight full of expectation that more should come their way as they look to put the disappointment of their last match (against Thailand) behind them.

Timor were oft back pedalling as they fend off the probing play from the left and also from the right as Sieng Chanthea and also Long Menghav tested the Timor backline further.

But with the score at just 1-0 at the break, the thirst for goal was eventually quenched when a mad scramble saw Piseth coming in for the kill on 55 minute.

And just three minutes later, Piseth added the third goal for Cambodia and his second of the evening with a dipping shot from the edge of the Timor box to beat Soares.

“The penalty killed the momentum for us,” said Timor team manager Amandio Sarmento.

“It was already tough having to play against the hosts with such support from the stand. So when we conceded the penalty, it disrupted our confidence.”

In the meantime in an earlier match, defending champions Thailand completed their group fixtures with a clinical 2-0 win over Laos to maintain a perfect record of four wins from four matches played.

Nititorn Supramarn nailed the opener in the 35th minute when he finished off a rebounded shot from Teerapat Chanphaeng as a quick counter right at the end of the game saw Jinnawat Russamee rounding things off.