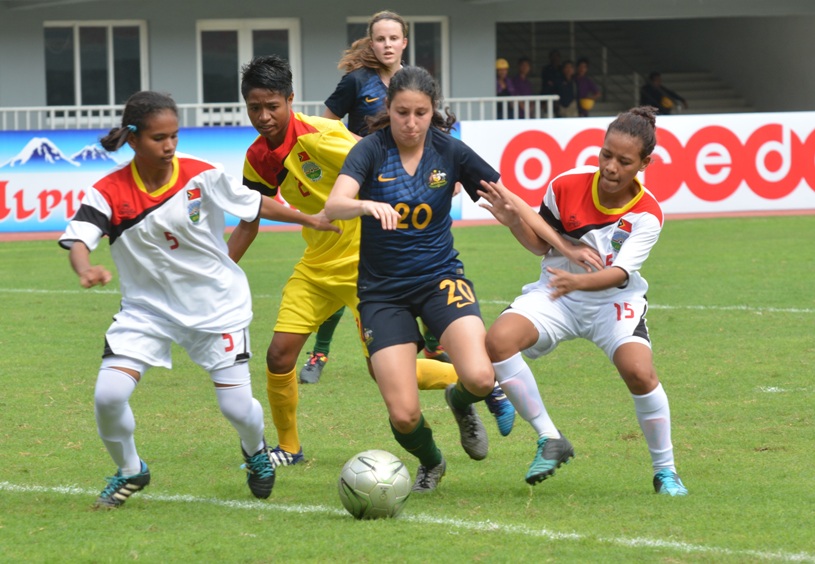 Hosts Myanmar and Australia Under-20 claimed their places in the last four of the AFF Myanmar Women’s Championship in contrasting fashion at the Mandalar Thiri Stadium here today.

While the home team, backed by over 15,000 passionate fans, slogged to defeat Malaysia 2-1, the Australia Under-20 team recorded the biggest margin of victory when they whipped Timor Leste 20-0.

Ironically, the Myanmar-Malaysian result was the lowest score so far.

Myanmar, runners-up in last year’s event, and Australia Under-20 both won their second consecutive Group B matches and are through although they still have one more game to play.

Myanmar will battle Australia Under-20 in the last group match to decide the top two positions.

The Aussies blasted the floodgates open after only two minutes when Melinda Barbieri pounced on poor clearances, first from the keeper and then a defender, to strike the first blow.

Melinda would add a second in 10th and a third in 24th for her hattrick.

While Australia Under-20 cruised through today, their first real test, however, will be in two days when they meet Myanmar, who had beaten them in the last edition of this tournament in Vietnam.

Myanmar, who were expected to easily brush the Malaysians aside, had a nasty scare when their opponents snatched the lead through a brilliant drive from Dadree Rofinus in the 18th minute.

Stunned by the goal, the Myanmar players scrambled for the equaliser which came when they were awarded a penalty. Khin Moe Wai made no mistake from the spot and celebrated with her relieved fans.

The Myanmar players threw everything they had and were rapidly firing away at the Malaysian goal, but they were almost constantly frustrated by goalkeeper Asma Junaidi who was the best player of the night.

Despite her best efforts, Myanmar’s Win Theingi Tun managed to sneak in the winner some ten minutes from the end when she knocked in a long cross at the far post.

Myanmar coach Roger Reuners: “We had a lot of chances to score but could not convert them into goals. Still, I’m happy for today’s win especially for the fans. I want to thank the Myanmar fans, the team received strength from them. A lot of people give strength to the team … but also pressure.
“I have one day before the match with Australia (on Sunday) and analyse them by watching their videos. I will work on fixing any weaknesses of my team.”
Malaysian coach, Mohd Asyraaf Bin Abdullah: “We used to lose by six or seven goals to Myanmar in the past. Today, we led until the 45th minute and this is very positive. I think it would have been difficult for Myanmar without the penalty. This is football, anything can happen. Congratulations to Myanmar for making the semifinals.