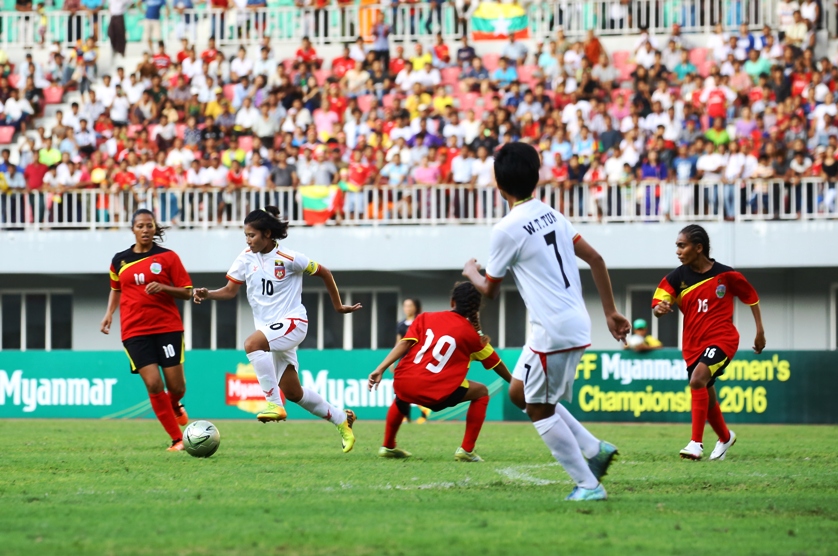 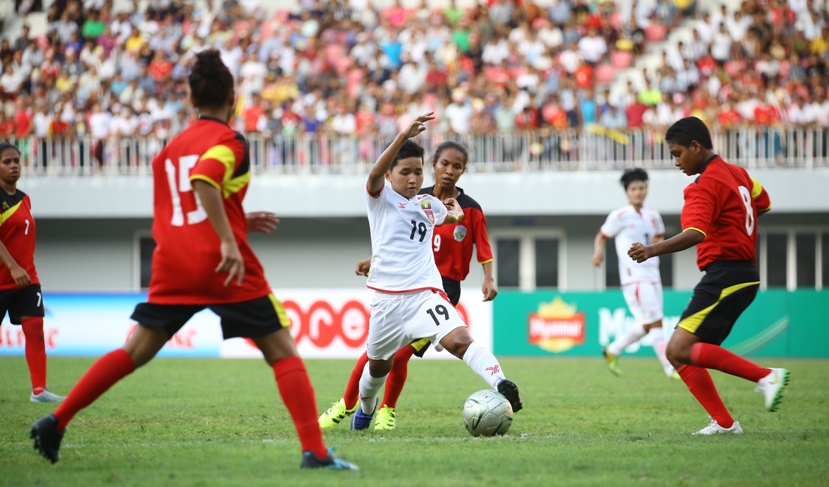 The home fans, some 10,000 of them at the Mandalar Thiri Stadium here this evening, thoroughly enjoyed the match.

They were treated to a goal-fest that saw their team score an amazing 17 goals against Timor Leste in the second Group B AFF Myanmar Women’s Championship match of the day.

Myanmar, runners-up in the previous edition of this tournament last year, have now scored the biggest victory after Vietnam’s 14-0 win over Singapore yesterday.

The huge win sent Myanmar to the top of the group with Australia rolling in second today. The Aussies had earlier beaten Malaysia 4-0.

The crowd began easing into the stadium more than an hour ahead of the kickoff, hoping for a good result from their national team. That was exactly what they got, a memorable victory which began with a third-minute goal from flanker Win Theingi Tun.

Theingi Tun completed her hattrick with two more goals – a penalty in the 13th minute and a perfectly deflected shot into goal in the 20th. Yee Yee Oo had earlier netted in the second after forcing her way through in the ninth minute.

Before the first part was concluded, Myanmar had drilled in another seven goals to take an audacious 11-0 lead.  It was the same story after the break as Myanmar continued their plunder.

The defence and goalkeeper, who were overworked, did well to restrict Myanmar to seven more goals in the second half.

In the earlier game today, Australia Under-20 overcame the hot and humid conditions and went on to secure a hard-earned 4-0 win over a gutsy Malaysian side.

The Australians moved fluidly as they made their way forward and before long were knocking on their opponents’ door. The Malaysian defenders could only clear anything that went their way.

But in the 13th minute, the Aussies managed to slip through. Princess Megan AtegbayonIi Ibini-Isei, who would later turn out to be a menace down the right, set up Cortnee Brooke Vine who whipped her team ahead.

Two minutes from the break, Australia doubled the score through Cortnee, who was again set-up by Princess. Prior to that, Malaysia’s Jaciah Jamilis burst through her markers but saw her shot slam into the post.

Australia could have added on more goals had it not been for the good work from Malaysian keeper Asma Junaidi. Just after the hour mark, Australia were awarded a penalty but Asma managed to push it out.

Malaysia did their best to contain their opponents but as they ran out of steam, the Australians charged on and picked up two more goals from Grace Maree Tenison Maher (83rd) and Alexandra Carla Chidiac (89th).