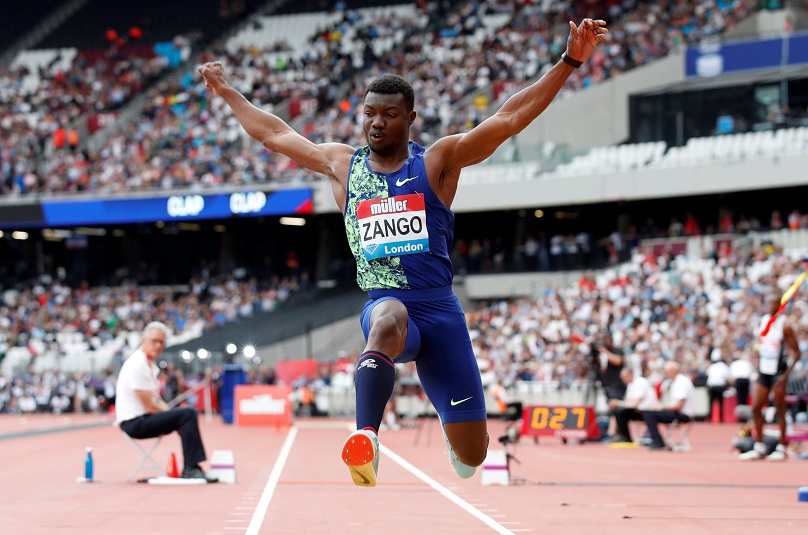 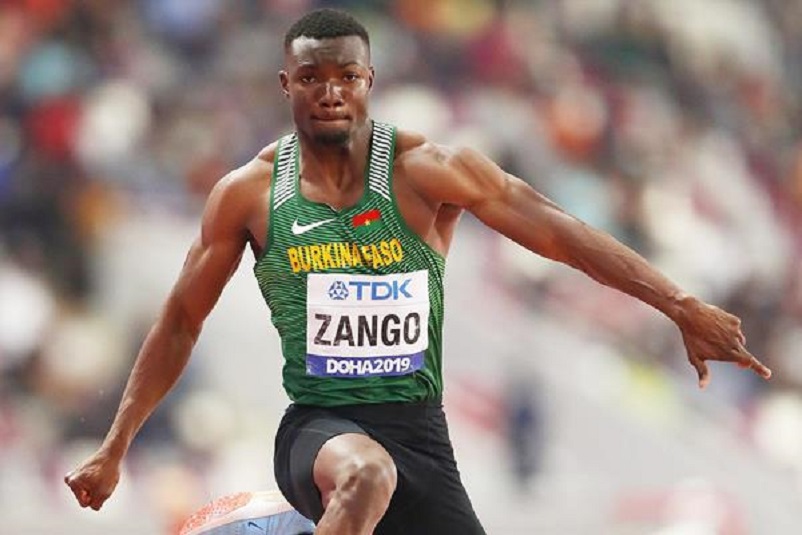 The 27-year-old triple jumper has been making history for Burkina Faso for several years, setting national and African records and racking up a collection of medals from major championships.

But Zango has now achieved another ‘first’ – and this one isn’t just a national milestone; it’s a global one.

At an elite jumps-only meeting in Aubiere on Saturday (16), Zango bounded out to a world indoor triple jump record of 18.07m*, becoming the first man to surpass 18 metres indoors.

His previous best, an outright African record of 17.77m, was set indoors in Paris last year and placed him equal fourth on the world indoor all-time list, just 15 centimetres short of the world indoor record set by his coach, Teddy Tamgho of France.

“For me, the most important thing is the world record,” Zango told the Olympic Channel last year. “This is what I want to achieve. When I become world record-holder, I will have done everything.”

Hugues Fabrice Zango describes his start in athletics as “accidental”.

Born in Koudougou and raised in the Burkinabe capital Ouagadougou, Zango’s early sporting interests were in combat sports, namely taekwondo. But in 2011 he was scouted to take part in a school athletics competition and it was there that he met a coach from a local club.

Zango decided to join the club, and during his first training session at the ‘Stade du 4 Aout’, he asked the coach: ‘Who is the best in the world in the triple jump?’

“It was 2011, I was 18 years old, and knew absolutely nothing about the event,” recalls Zango. “My coach told me the best in the world was Christian Taylor, who, at the age of 21, jumped 17.96m to win the world title that year in Daegu. ‘That’s impossible’, I told myself. My best was 12 metres. How could he jump five metres farther?”

A keen student, Zango started studying his event and would regularly ask his coach questions. He set himself a goal to jump 13 metres by the end of that year, then 14 metres the year after and so on, with the aim of jumping 17 metres by 2017.

He also gained significant international experience along the way. He took silver at the 2015 World University Games but then failed to record a valid mark at the World Championships in Beijing six weeks later. In 2016 he earned silver at the African Championships and made his Olympic debut in Rio, but finished down in 34th place in qualifying.

He came close to achieving his ’17 metres by 2017’ target, leaping 16.97m to take silver at the World University Games in what was his final competition of 2017. But he finally smashed the barrier at the start of 2018 with an indoor leap of 17.23m to break the African indoor record.

Towards the end of the 2018 outdoor season, Zango started working with 2013 world champion Teddy Tamgho.

“He’s more than just an 18-metre jumper,” Zango says of Tamgho. “As a coach, he really knows his event and loves it, which is so important. He searches all the time for new ways to improve and no two athletes he coaches get the same training programme. It’s really specific to the athlete.”

The move bore fruit in early 2019 when Zango pieced together an undefeated indoor season, capped by a lifetime best of 17.58m – the farthest jump ever achieved by an African triple jumper, indoors or outdoors.

He performed well on the Diamond League circuit outdoors later that year and warmed up for the World Athletics Championships Doha 2019 by leaping an outdoor best of 17.50m to win the French title.

By the time he arrived in Qatar for the World Championships, he was no longer intimidated by the world’s best triple jumpers – not even his idol, Taylor. Zango jumped into a medal position in the second round, but was bumped down to fourth place when Taylor took the lead in round four with 17.86m.

Zango kept his cool, though, and uncorked a 17.66m lifetime best in the final round to take bronze, becoming the first athlete from Burkina Faso to win a global athletics medal. With four men jumping beyond 17.60m, it was also one of the highest-quality triple jump competitions of all time.

“It meant a lot to finish third behind Christian Taylor and Will Claye and beat Pedro Pablo Pichardo because they all jumped beyond 18 metres in their careers,” said Zango. “For Burkina Faso it was really a big thing because we’d never had a medal on the world level. Finally we have entered into world athletics. I am the first and I hope more medals will follow.”

Zango had looked set to step up another level in 2020, following his world-leading African record leap of 17.77m in what was his first competition of the year. But after Zango enjoyed another undefeated indoor season, the Covid-19 pandemic started to spread and the world temporarily ground to a halt.

It added an extra layer to what was already a fairly complicated set-up for Zango, who is currently studying for a PhD in electrical engineering. Typically he’d attend university in Béthune, just outside Lille, during the daytime and then train in the evenings. At the weekend he’d make the five-hour round trip to the National Institute of Sport, Expertise and Performance (INSEP) in Paris for technical sessions with Tamgho.

Although working on his thesis is time-consuming, Zango feels it complements his sporting career.

“I like research, I’m quite curious,” he told Le Monde last year. “I have a thirst for knowledge and I could not give up studying. Studies without sports are not good; there would be a part of me missing. One allows me to escape the stress of the other. I’ve found a good balance.”

“He is disciplined and determined,” says the French record-holder. “His academic background allows him to intellectualise the training, to have a finer understanding and a more precise vision of his art. You have to know how to speak your language. He’s a workaholic, a scientist and always gives 200%”

Zango’s next big goal is the Olympic Games and he hopes to win Burkina Faso’s first ever Olympic medal, but he tries not to let the pressure get to him.

“Now there’s a certain expectation,” he says. “But I’m really cool, every day I try to relax and just take things how they come.

“Persistence is the key in this sport, and that’s what I tell young people,” he says. “It’s as true now as it was when I was jumping 12 metres at the age of 18.”