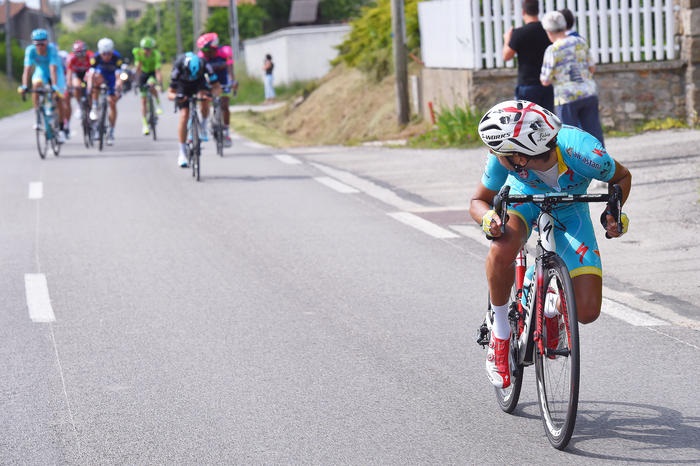 Italian Fabio Aru broke clear on the final hill and dug deep to hold off the swooping peloton to win stage three of the Criterium du Dauphine on Wednesday.

The 25-year-old Astana rider was on his own for a full 13km after cresting the last climb with a slender 10-second lead and needed all the resilience he could conjure to hold off the chasing pack by a razor-thin two seconds.

Alexander Kristoff won the sprint for second ahead of Niccolo Bonifazio at the end of the 182km stage from Boen-sur-Lignon to Tournon-sur-Rhone.

“It’s a new experience for me to win in this way,” said Aru.

“I wanted to try something but I didn’t think I’d win.”

Alberto Contador held onto the race leader’s yellow jersey despite suffering a mechanical failure around 4km from home.

The Spaniard faced a desperate, high-speed chase to catch the peloton after his teammate Roman Kreuziger lent him his bike.

He maintained his six second lead in the overall standings ahead of Australian Richie Porte, with Tour champion Chris Froome third at 13sec.

“In the last descent I was well-placed in the front positions but then I had this (mechanical) incident,” said Contador.

“I tried to make it to the last 3km but it wasn’t possible.”

Had he made it into the last 3km, he would have managed to avoid his late chase as he’d have been guaranteed the same time as the group he was with at the time of his mechanical.

Around 20km from the finish, Aru had chased after an attack from Tony Martin on the 3km long final climb — with an average 8.2 percent gradient.

The Sardinian then confidently broke off downhill on his own for a daring solo bid for victory, notably dropping Sky’s Mikel Landa.

Aru was the break-out star of last season, winning the Vuelta a Espana and finishing runner up to Contador at the Giro d’Italia. The Italian will make his Tour de France debut next month.

“It’s a race which fascinates me and I can’t wait to get started. Along with Vicenzo Nibali (Astana’s co-captain and Giro winner last month) we feel we can make something wonderful happen,” said Aru.

Contador is also targeting the Tour and had kind word’s for his young Italian rival.

“He’s a very consistent Tour rider and a potential Tour de France winner. He’s a winner, I’ll need to keep close tabs on him. He’s one to watch too, a lovely rider who creates excitement, and cycling needs that,” the Tinkoff leader said.

Aru is well off the pace after losing more than a minute on Sunday’s 3.9km prologue before dropping more time on Tuesday’s second stage.

Thursday’s fourth of seven stages through the southern Drome region is a 176km run over flat and rolling terrain.

Results from the 187km third stage of the Criterium du Dauphine from Boen-sur-Lignon to Tournon-sur-Rhone on Wednesday: