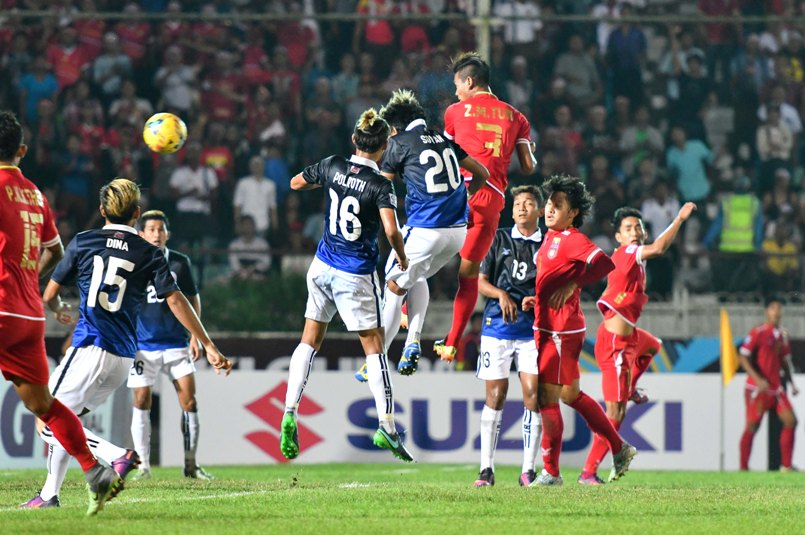 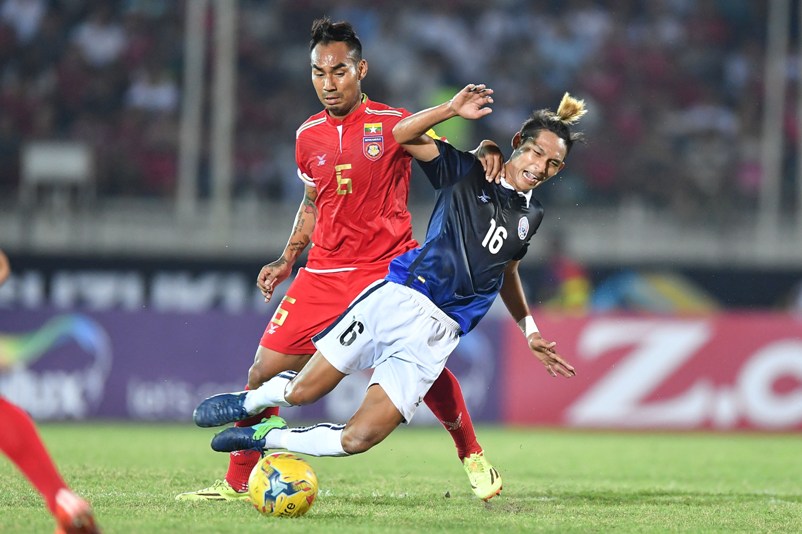 Cambodia became the first side to be knocked out after they suffered a 3-1 defeat to hosts Myanmar.

It did not look to be the case initially though, as they had the brighter start to the game and had the lead just after 15 minutes. Sos Suhana scored after superb work from Chan Vathanaka, who drew all the attention after making a run in before cutting back for Suhana.

But that was all that went well for the Cambodians, who could not withstand the subsequent pressure from the White Angels.

Defender Zaw Min Tun scored twice from set-pieces in a five-minute span to give his country the lead at the break, before Aung Thu wrapped up the win with a clinical finish 11 minutes into the second half.

Myanmar subsequently slowed down the pace of the game, and while Cambodia certainly tried to chase back the score, fatigue hindered them, which meant that the hosts were able to see out the game.

14’ (1-0) It was the first real opportunity either side had and Cambodia made full use of it. Chan Vathanaka attacked down the left and drew Myanmar goalkeeper Kyaw Zin Phyo out of position, before cutting it back for Sos Suhana to pass it into the empty net.

40’ (1-2) Zaw Min Tun does it again with another towering header, this time out jumping Sok Sovan to meet Nanda Kyaw’s corner to give Myanmar the lead.

56’ (1-3) A deflected pass rolls onto Aung Thu’s path, and the forward takes the chance clincally by slamming it into the top corner to leave Sou Yaty with no chance.

Sent through on goal in the 17th minute, Aung Thu had a great opportunity to level matters, only to send it a few inches wide in a one-on-one situation.

Mg Mg Lwin skips past a few challenges on the edge of the box before firing a low effort which Sou Yaty does well to push wide.

Prak Mony Udom gets onto the end of a lobbed pass from Chreng Polroth and decided to take the shot first time, which he volleys way over.

Sos Suhana gets past his marker with his trickery, but couldn’t beat Kyaw Zin Phyo with his effort in the 33rd minute.

Slipped in behind by Kyaw Zin Lwin, Aung Thu had another superb opportunity to give Myanmar the lead, but Sou Yaty proved equal to it.

Save hands from Kyaw Zin Phyo –

Sam Oeun Pidor’s shot takes a huge deflection and loops towards goal, but Kyaw reads it well and smother its in mid-air.

Aung Thu sent Kaung Set Naing clear on goal, but the latter’s heavy touch saw him lose a decent opportunity and Sou Yaty is allowed to make a vital stop.

Kaung Set Naing found himself in a superb position and goes for goal alone in the 51st minute, but fires it narrowly wide.

Set up by the superb Aung Thu once more, Kaung Set Naing had all the time in the world to pick his spot, but sent his tame effort straight into Sou Yaty’s arms.

The Cambodian captain managed to get free down the left in the 79th minute and decided to have a go from an acute angle. Kyaw Zin Phyo was alert and proved equal to it though.