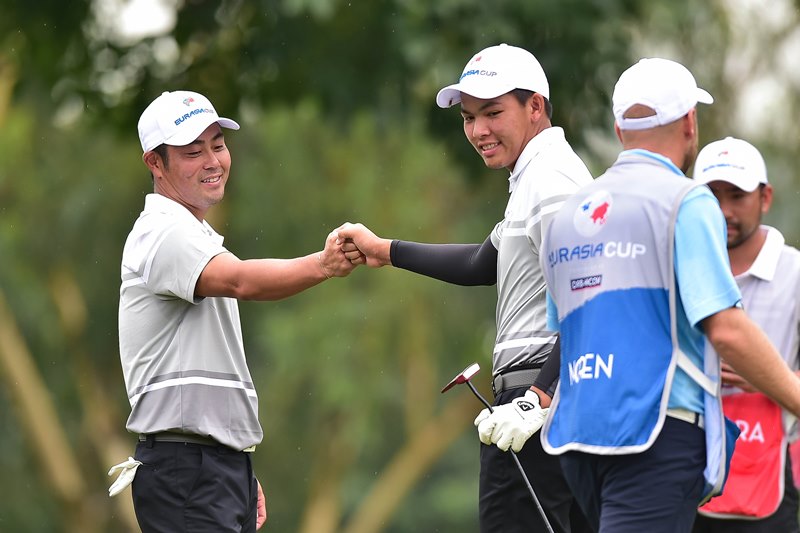 Malaysia’s Gavin Green and Thailand’s Phachara Khongwatmai proved they can take on the best players from Europe by maintaining their unbeaten streak at the EurAsia Cup presented by DRB-HICOM.

Green and Phachara have so far won their fourballs and foursomes matches with their respective Japanese partners Yuta Ikeda and Hideto Tanihara while China’s Li Haotong, who is also making his debut at the EurAsia Cup, showed he can be counted upon as he sunk a birdie on the last hole to halve his last fourball match against Bernd Wiesberger and Rafa Cabrera Bello on the opening day.

Li continued his effective partnership with Malaysia’s Nicholas Fung when they wrapped up the day’s matches with a convincing 3&1 victory over Bernd Wiesberger and Ross Fisher of England.

Green underlined his growing credentials as Asia’s number one as he held his nerve to deliver another morale boosting point for the team.

They had stood on the verge of a foursomes whitewash after the Europeans had put the first three points on the board at one stage.

Phachara then steadied the ship with Tanihara by bringing down Alex Noren of Sweden and Ireland’s Paul Dunne 2&1 to shift the momentum back to Asia at the Glenmarie Golf and Country Club.

We were just up and down the whole day.  We were 2UP at one point, got back to even, went down. We got a penalty on 14 but we stayed patient as we had four more holes to go. We were two down, so we hit a good tee shot on 15, good second shot, good putt and back to 1 down and we were back in it.  For me, it’s always nice to play in front of a home crowd but at the same time it adds pressure, but at the same time, the match play game is fun.  We just have to think that we are going to go ahead and enjoy it no matter what happens.  We’ve done a lot to come this far, and we are just going to try to push as much as we can.

I think tomorrow as long as we stay patient and just play our own games, I think we’ll be fine. The crowd is great and the support is great.  The team room is amazing.  Everyone is having fun.  Once we are off the course, we are doing something else.  We are not talking about golf.  We are either playing ping pong or pool or just doing something else to get away from golf, which is great.  The good thing is all of us are really close.  We are all hanging out and chilling together and talking.  It’s great.  I could get used to this.

I played very well today especially my putting. It was good to see most of the putts going into the hole today. Before going out to the course, I just told myself one thing and that is to do my best for Asia. Hideto is a very good partner and we combine really well. He taught me a lot and been guiding me well this week. I’m happy with how our partnership has gone and the results have shown the last two days. I know I’m the youngest players in the Team and everyone is very proud of how I’ve played so far. So it has been very good so far.

We (with Li Haotong) understand each other well.  It’s important we are able to communicate well as that helps to ease the pressure. I mean, we know that Team Europe is strong and we have to shoot as low as we can and try to make more birdies. Haotong putted well. .  So I think we just have to play our own games, play shot by shot.  We need to be patient all the time for the match play because one lost hole doesn’t mean we lost the game.  Just need to get more birdies as possible, that’s very important.