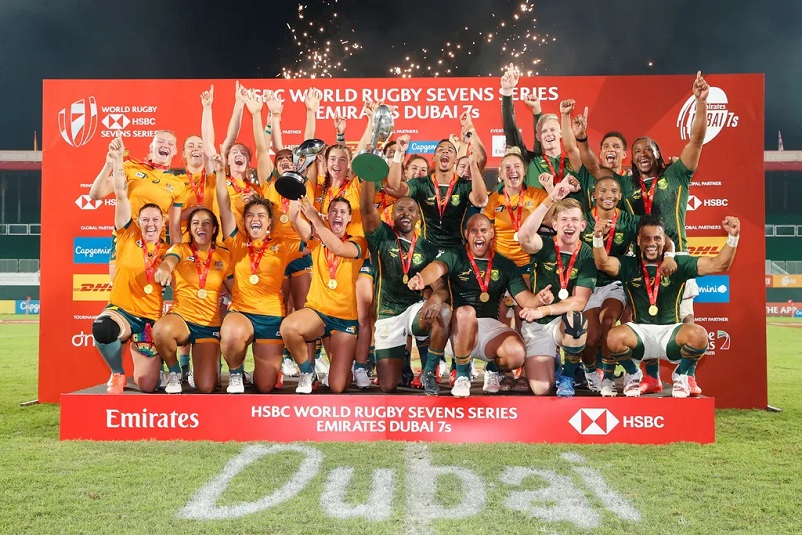 USA men finish with silver medal, while Argentina repeat their Olympic performance by claiming bronze with an exciting victory over Olympic champions Fiji

South Africa laid down a daunting marker to their HSBC World Rugby Sevens Series rivals as they stormed to an eighth Emirates Dubai 7s title in the opening event of the season.

Australia were equally dominant in the women’s competition, winning every match to be crowned champions and win their first Series gold medal since 2018, after a 22-7 final win over Fiji.

The Blitzboks defeated 2018 Dubai runners-up USA in Saturday’s men’s final with a crushing 42-7 victory to clinch a third consecutive Series gold medal, after beating Australia and Argentina in the knockout stages and winning all their Pool matches.

Neil Powell’s side, crowned 2021 Series champions in September after winning in Vancouver and Edmonton, broke their record 16-match Series winning streak from 2008/09 by ending the tournament with an 18th consecutive victory.

They also racked up their biggest points haul in a Cup final, beating their previous best of 40 points against New Zealand in Las Vegas in 2013.

South Africa captain Siviwe Soyizwapi said: It was a really good weekend for the boys. We took a little while to get into our stride but today we really picked up and implemented what we have worked on. We are really happy with the final, that’s how we want to play the game. We really work hard on our conditioning and our style of play and it paid off in the end.

Looking ahead to next week when Dubai will again host the second round of the Series but this time with a large crowd in the Sevens Stadium, Soyizwapi added: “We are excited to have the fans back next week, we really feed a lot off the crowd and the atmosphere in the stadium here is always fantastic so we are happy to have them back.”

In the women’s tournament top seeds Australia brought a new-look young side to Dubai, but any lack of familiarity didn’t show as they put Fiji to the sword in the final to complete a hugely impressive campaign and bounce back following their fifth-place finish at the Olympics in Tokyo.

The only side of the 10 competing women’s teams to have previously won the Dubai title, most recently in 2017, the Australians scored 163 points and conceded 39 in their five matches.

Australia captain Demi Hayes scored a pair of tried in the victory over Fiji and was delighted with the result: “We’ve worked really hard this pre-season and we wanted to come out and start with a bang. After four undefeated games in our pool and then that final against Fiji we’re so stoked. We spoke about having a great attitude and leaving it all out on the field because we’ve worked so hard in pre-season.”

Reflecting on her first Series event as captain, Hayes added: “The girls did great and I’m so proud of them. Our wider squad goes from 1 to 20 and every person played a part in that win. I feel lucky and proud to lead them out. We’re definitely looking forward to next weekend but we won’t be putting ourselves on a pedestal, we’ll keep our expectations low and just focus on performing each and every game to try to get that win.”

Australia’s men also finished on a high with a 35-21 over Great Britain in the fifth-place playoff, while Ireland clinched seventh by beating Kenya 29-7, helped by a hat-trick from the in-form Terry Kennedy that took his Dubai tally to nine tries.

France pipped Spain to ninth in a thrilling game, fighting back from 21-7 down at half time to win 28-26 through a late Nelson Epee try, while Canada rounded off their tournament with a 22-14 victory over Japan in the 11th place play-off.

Brazil were the most improved performers in a highly competitive women’s competition, recording an historic 12-10 victory over the USA to finish third in their pool. It was the South American’s first-ever win over the States and capped an excellent pool stage performance after they defeated Spain and only narrowly lost to France on day one.

Fiji had earlier put in a superb display in their final Pool B match to snatch top spot off Great Britain with a 28-5 victory. The British side were in pole position to reach the women’s Cup final after beating Canada 24-7 to make it three wins from three, but their heavy defeat to the Fijians saw them drop to third behind Russia, who defeated Ireland 14-5 and Canada 17-10 to reach the bronze medal match.

Fiji, Russia and Great Britain finished level on 10 points after each winning three games in a closely contested pool, but they finished in that order on points difference.

The men’s and women’s teams will do it all again next week as they stay in Dubai for the second round of the HSBC World Rugby Sevens Series on 3-4 December, this time with fans filling the stands at the Sevens Stadium.

VIEW POOLS FOR SERIES ROUND TWO >>

The pools have already been confirmed for round two of the Series. The men’s tournament again consists of 12 teams with three pools of four teams. South Africa will look to continue their record-breaking winning run against Great Britain, Ireland and Japan in Pool A. Beaten finalists USA are together with Australia, Kenya and Canada in Pool B while Olympic bronze medallists Argentina and gold medallists Fiji are joined by France and Spain in Pool C.

The ten women’s teams are drawn into two pools of five teams, with in form Australia drawn in pool A alongside Russia, Brazil, Canada and Spain. Pool B sees beaten finalists Fiji, bronze medallists France, Great Britain, USA and Ireland in what promises to be a very hard fought pool.

After the second round in Dubai the Series will take a break before returning in January when a pair of new host cities will welcome the best sevens players in the world as the Series arrives in the Spanish cities of Malaga and Seville on 21-23 and 28-30 January respectively. – WORLD RUGBY