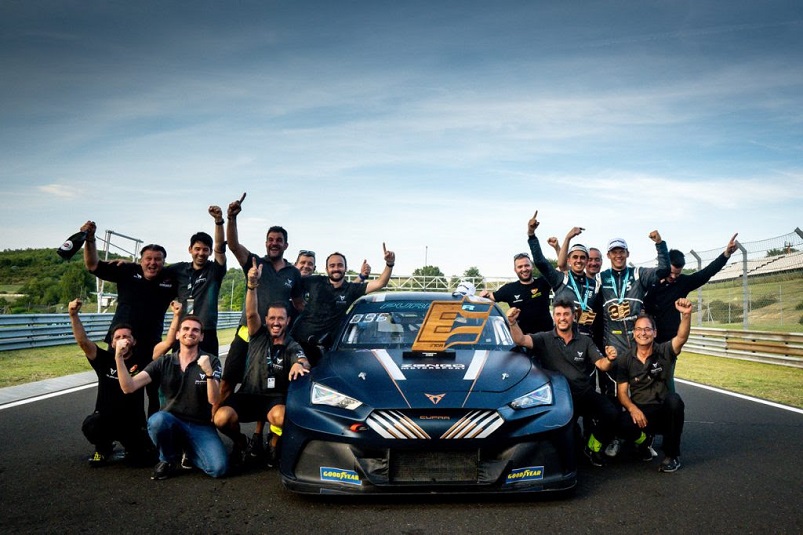 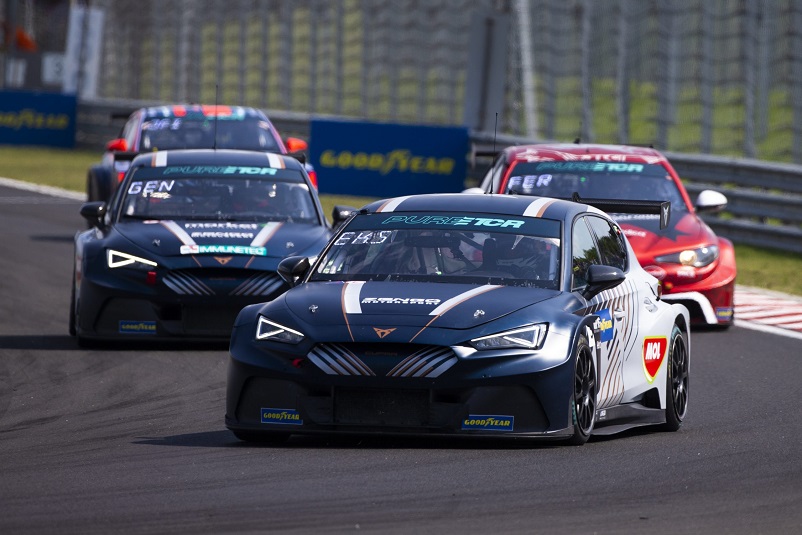 Mikel Azcona made history at the Hungaroring as the CUPRA X Zengo Motorsport driver became PURE ETCR’s first two-time King of the Weekend in dominant fashion.

After winning both of his Battles on Saturday, he added victories in both Time Trial B and DHL SuperFinal B today in scintillating fashion to end the weekend with a perfect record and a 77-point maximum score.

A sensational opening lap to the DHL SuperFinal B featured several lead changes as Azcona, Hyundai Motorsport N’s Jean-Karl Vernay and Romeo Ferraris-M1RA’s Luca Filippi all had a spell in front; each driver choosing to use their Power-Up in varying ways.

Eventually Azcona broke clear to win, adding TAG Heuer Most Valuable Driver status to the #BestLapTrophy he collected with his Time Trial victory, and finishing the event in an improved third place in the Drivers’ Standings.

The podium celebrations were capped off as Zoltan Zengo – Team Principal of Budapest-based Zengo Motorsport – collected the Winning Manufacturers’ Award for CUPRA in front of an enthusiastic home crowd.

Azcona’s victory was the third for the CUPRA e-Racer in four PURE ETCR events in 2021.

Earlier in the day, Philipp Eng won DHL SuperFinal A to briefly put himself in prime position to be crowned King of the Weekend.

His 72-point total was the second-best of the event and ensured a second Hungarian-supported team – Romeo Ferraris-M1RA – appeared on the podium.

He defeated Time Trial A winner Mattias Ekström, who finished third overall to leave Budapest with an increased 29-point advantage over Vernay in the fight for the crown and another Goodyear #FollowTheLeader jacket.

The action continued further down the order with points remaining crucial in the fight for the Manufacturers’ title – which still includes all three participating brands heading to the finale.

Local hero Dániel Nagy finished third in SuperFinal A; he and Luca Filippi having made contact mid-race; the Italian brushing the barrier and suffering a puncture as a result of a shard of bodywork cutting his left-rear tyre. Nagy was later penalised 20 championship points by the Race Stewards for his part in the incident.

Gené ensured that all four CUPRA drivers finished on their DHL SuperFinal podiums with third in SuperFinal A; the Spaniard picking his way through much of the action.

Mikel Azcona (CUPRA X Zengo Motorsport) said: “I’m very happy to be King of the Weekend and very proud of the team. I have to say thank you to my team-mates Dani, Mattias and Jordi because we’ve all been working so hard to achieve this. I felt quite good in the Time Trial and in the SuperFinal I felt I had to use quite a lot of my Power-Up quite early because JK [Vernay] was very close to my rear bumper and it wasn’t so comfortable. The car was very good, I made a gap and then I could relax a little.”

Philipp Eng (Romeo Ferraris-M1RA), said: “I’m very proud to be sitting here again; not in the middle, but in second place this time. It was a very strong weekend, but we didn’t use all of our potential. It was certainly a disadvantage being first out in the Time Trial because nobody knew what the grip levels would be, but it was a lot of fun. We’ve been extremely quick and that’s down to good teamwork. Just like the CUPRA guys, we worked very hard for this. We had a very open discussion about the driving set-up and it’s helped all of us. Of course I would love to be the King of the Weekend, but once my SuperFinal was done, it was in Mikel’s hands. I’m looking forward to the next one.”

Mattias Ekström (CUPRA X Zengo Motorsport) said: “Sometimes you gamble and you risk to score points, but in my position as championship leader you have to be a bit smarter and make sure you score well. Challenging Philipp – a guy who only came into the championship after two events and who has a different target to me – was a decision. He’s a great competitor and we raced fairly and cleanly. The 500kW Time Trial was great. You have to go flat-out to win that. It’s not a coincidence that us three sit here. I extended the championship lead by a few points so that’s good and I’ll look forward to the finale now.”