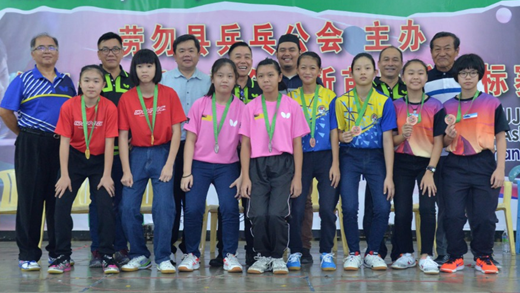 Lee Xin Ni has been selected by International Table Tennis Federation (ITTF) to be a member for the 2019 World Hopes Team since 14 August, 2019. This is her 2nd year holding to her U13 ranked number one spot in Malaysia.

In the U-13 Boys Single event, Caleb Hong Zi An is now ranked number one after defeating Lee Zhen Wei (4-0) in the final. Quek Seng Yen and Pang Xiang Jun were joint bronze winners.

The U-13 Boys Team Event was won by Team Melaka after beating Team Perlis (3-2). Bronze winners were Team Selangor and Kuala Lumpur.

The tournament is aimed at identifying talents that can be groomed further for international tournaments. It is part of the International Table Tennis Federation (ITTF) Hopes Programme conducted globally. Hopes Programme is a series of events at national, regional and world level, featuring education, training camps, competition and talent identification.

Organized by the Pahang Table Tennis Association, the 32nd edition of the annual tournament, held from 27 November to 1 December, 2019, drew a total of 310 participants from 13 states and 3 Federal Territories of Kuala Lumpur, Putrajaya and Labuan.

“This year’s tournament drew the most number of participants to date. It is always good to see young talents demonstrating their skills. Overall, we are pleased with what we see as the bar has certainly been raised. We have identified a few potential talents at this tournament and we will look into sharpening their skills further as our intent is have good succession plan for team Malaysia,” said Dr. Chin, Vice President, Table Tennis Association Malaysia (TTAM).

“From here on, these young players will grow to be cadet and junior players and we hope they will one day make our country proud,” he added.