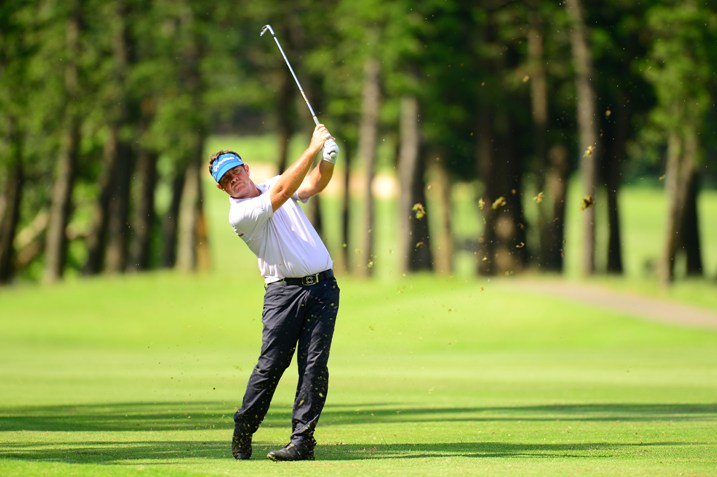 Australia’s Scott Barr made his move with a flawless five-under-par 67 to grab a share of the second round lead with overnight leader Namchok Tantipokhakul of Thailand at the Yeangder Tournament Players Championship (TPC) on Friday.

Hung Chien-yao together with Wang Wei-lun spearheaded the local charge after they compiled identical two-day totals of eight-under-par 136 to trail the co-leaders by one shot alongside the Spanish duo of Carlos Pigem and Javi Colomo.

Malaysia’s Danny Chia, whose previous two Asian Tour wins have come from Chinese Taipei, is hoping to strike again after he carded a 68 to be bunched in seventh place at the US$500,000 event, which is also the final Olympic qualifying event on the Asian Tour

Barr, who won a domestic event in Singapore before arriving at the Linkou International Golf and Country Club, is looking to extend his winning run this week.

“I won an event in Singapore before coming here so I’m feeling good. It’s nice to come straight here and get back into it. We’ll see how it goes but things are going well so far,” said Barr.

The Australian’s determination to win his maiden Asian Tour title showed when he surged ahead with an outward 32 which was marked by four birdies on holes one, four, five and seven.

Thanks to his course familiarity, Barr then went on to sink another birdie on 12 before returning home comfortably in 67.

“The greens can be really challenging here. You got to read them well and a little bit of intuition helps too.

“But I’ve been coming back here long enough and I have a feel of what’s going on,” said Barr.

Although he could not match his opening efforts of a 65, Namchok continued to find himself in familiar position atop the leaderboard.

The Thai hopes he can surmount the much-needed charge when the weekend rounds starts.

“I played okay. Although it was not as good as yesterday, it’s still alright as I’m in a good position. I did not hit the ball that good but my putting was okay. I need to be sharper over the weekend to give myself a chance.

Hung meanwhile credited his positive state of mind for another assured performance on home soil.

“I did pretty much everything right today except for that bogey on 15 which I three-putted. I’m in a good position and the key is to continue to enjoy myself out there and play my own game.

“Mentally, I was more composed as compared to yesterday. I was feeling more calm and was not distracted easily especially on the greens which can be tricky,” said Hung.

The cut was set at one-under with a total of 73 players progressing into the weekend rounds.

Leading scores after round 2 of the Yeangder TPC 2016 being played at the par 72, 7108 Yards Linkou GcC course (am – denotes amateur):