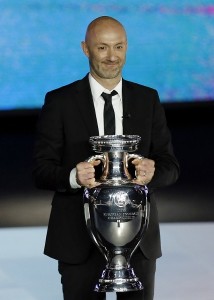 INTERNATIONAL football newboys Gibraltar were handed a dream draw in the Euro 2016 qualifiers today, as the continent’s leading sides avoided any stern tests.

Tiny Gibraltar, who played their first official friendly after being accepted as a UEFA member in November last year, were drawn in Group D in their first major competition.

There they will take on the might of Germany, who will be bidding to qualify for a 12th consecutive European Championship finals.

The British Overseas Territory were also drawn with Scotland, as well as the Republic of Ireland and Poland in what looks set to be an unforgiving section, but elsewhere Europe’s leading powers were largely spared.

England’s toughest game in Group E should come against Switzerland, while two-time defending European champions Spain will get their toughest matches against Ukraine and Slovakia in Group C.

However, the draw in Nice was a little less kind on the Netherlands, who must come up against the Czech Republic and Turkey in Group A, and Italy, who will tackle Croatia in Group H.

Euro 2016, which will be held in France, will see 24 nations advance to the finals for the first time in the history of the European Championship.

Only eight nations participated in the finals when France last hosted the competition in 1984, before the number of finalists was increased to 16 in 1996.

The decision to increase the number of finalists has been criticised by many who believe the quality of football on offer come the tournament itself will be diluted as a result.

However, the format means it seems almost certain all Europe’s leading nations will be there along with the French, who qualify automatically as hosts.

The top two teams in each of the nine groups will advance to the finals along with the best third-placed side, while the remaining third-placed nations will play off for four more berths.

There are eight groups of six teams as well as one – Group I – that contains five nations. However, France are also allocated to that group and will play friendly matches against those teams, for which no points will be awarded.

The first qualifiers will be played on Sept 7 and the campaign will see matches spread over six days, from Thursday to Tuesday, during every international break in a format that UEFA have championed as the ‘Week of Football’. The finals will run from June 10-July 10, 2016.